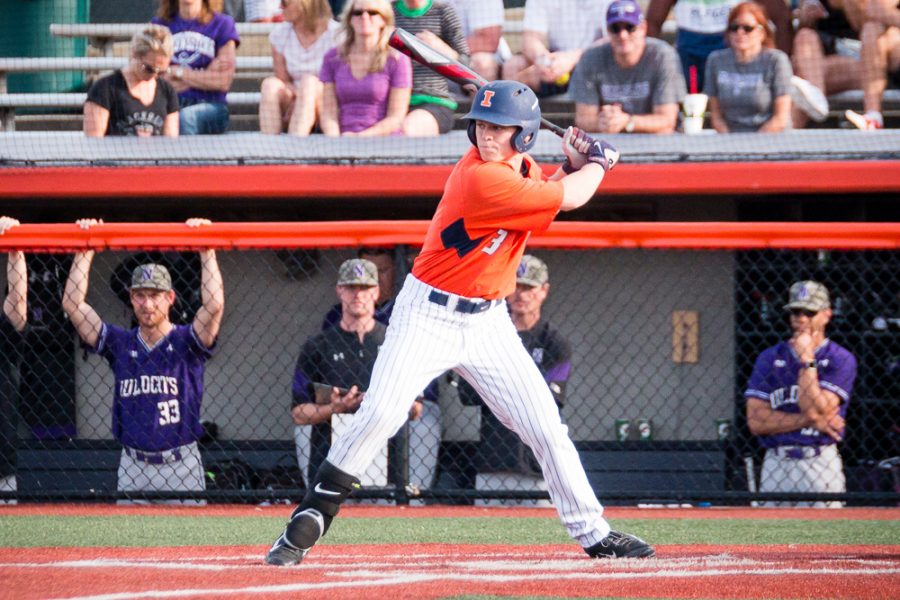 Illinois’ Jack Yalowitz gets ready to hit against Northwestern at Illinois Field on April 15.

It took Illinois 11 innings Friday before finally securing a 4-3 victory over Northwestern.

Saturday was a different story, as the Illini were never really in the game, dropping it 11-4.

Sunday, however, might have been one of the team’s most solid games of the season, winning the game and the series — a first against a Big Ten opponent this season. The Illini have now won seven of their last 10.

Head coach Dan Hartleb said the win means a lot to his team, and that he has been happy with its play as of late.

“It’s something we needed to get accomplished,” Hartleb said. “We put ourselves behind the eight-ball a little bit by getting swept the first one and losing the second, but to finally get back to winning ways, especially at home, was much needed.”

A big part of the Illini victory was due to starting pitcher Matthew James. James finished the day with 5 2/3 innings pitched, allowing just five hits and three earned runs. The start was the senior’s longest of the season.

“He did a good job today,” Hartleb said. “Today was a big game for us, and he had a good outing on Tuesday, so he earned this start. But he went out and just produced and did a really good job. It was an important day for us and a good day for him.”

Hartleb added that he thinks the reason for the team’s recent success is due to its maturation over the season and eliminating the errors it was making early in the season.

The Illini took an early lead Sunday, scoring two runs in the bottom of the third for the first runs of the game. Left fielder Dan Rowbottom got the Illini on the board after walking and advancing on a Trent Hammond double. Rowbottom eventually scored on Jack Yalowitz groundout.

Hammond also went on to score after freshman infielder Ben Troike knocked him in with a line drive back up the middle. Troike advanced to second on a controversial rundown — Northwestern head coach Spencer Allen argued that he was out of the base path — but the Illini could not capitalize on the opportunity, eventually stranding him on the base path.

But, that would not keep the Wildcats out of the game, as they quickly answered on a solo-shot by designated hitter Joe Hoscheit in the top of the fourth. The home run was Hoscheit’s second of the series and fourth of the season.

The Illini were quick to get that run back in the sixth inning with Yalowitz launching his seventh home run of the season and third in his last four games.

After heading into the sixth with a 3-1 lead,  James looked ready to settle in and shut Northwestern down, but the Wildcats had a different idea.

Northwestern catcher Jack Claeys and third baseman Connor Lind each picked up RBIs in the sixth to tie the game, knocking James out of the game.

Again, the Illini were quick to answer and did so with five runs in the bottom of the sixth. Doran Turchin, Yalowitz and freshman Michael Massey collected RBIs to extend the lead to five.

After Ryan Schmitt held the Cats scoreless in the top of the seventh, the Illini continued to see the ball well and added an additional two runs after sacrifice flies from Hammond and first baseman Pat McInerney.

But, even with a seven-run deficit facing them in the top of the eighth, the Wildcats were not done.

After loading the bases, Schmitt allowed a base-clearing double to the gap by Lind to collect his second, third and fourth RBIs of the game.

Following a single to right, Schmitt was taken out after throwing 1 1/3 innings, allowing four earned runs on six hits.

Illini closer Joey Gerber came in and immediately induced a double play, which was promptly followed by a walk before Hammond made a diving stop at third, throwing the runner out at first.

The ninth inning brought even more chaos. After quickly retiring the first batter in the top of the ninth, Gerber gave up back-to-back doubles to allow the Wildcats back within two runs. He followed that up by hitting the next batter in the back.

But, despite the sticky situation, Gerber punched out the next batter before a grounder to second ended the game.