Illinois softball’s Farina has always been a playmaker 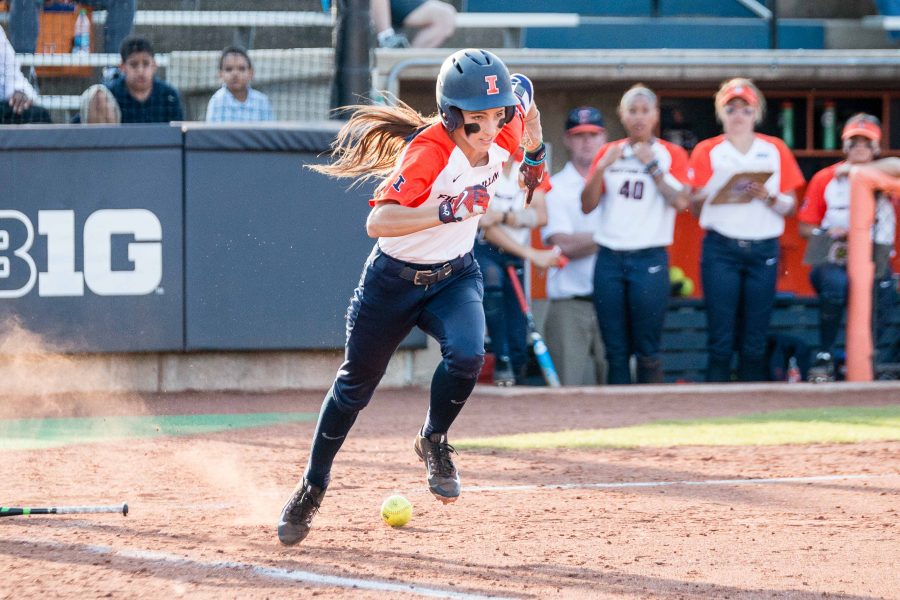 Illinois’ Leigh Farina sprints to first after putting down a bunt against Butler at Eichelberger Field on Wednesday. Farina earned Illini of the Week honors after her performance against Michigan State last weekend.

Before she thought about playing in college, being the starting second baseman for the Illini or winning a Big Ten championship, Leigh Farina first picked up a softball when she was five years old.

She joined her first travel team in fifth grade, and by the time she reached high school, she had developed a love for softball that she didn’t have for any other sport.

“I basically had a decision to choose what sport I wanted to do, and my heart was always set on softball,” Farina said. “I definitely think that was the right choice.”

At William Fremd High School, Farina made an impact from an early age. During the middle of her freshman year, she was called up by head coach Jim Weaver to join the varsity team, and her accomplishments upon graduation speak for themselves.

Her RBI total is the second-most in school history, and she ranks within the top-10 in nine statistical categories. But out of everything she accomplished, there’s one honor that stands above the rest.

“I think that I would be most proud of getting First-Team All-State when I was a junior,” Farina said. “That’s just a pretty cool accomplishment to know that you’re one of the best players in all of Illinois. When you get accolades like that, it really shows that all of your hard work is paying off.”

Farina’s historic high school career solidified her opportunity to play in college, and when the time came to make a decision, she decided to stay home and go to Illinois.

She chose the University mainly because of its academics but added that the atmosphere of the team and campus made the decision very clear for her.

During her three seasons at Illinois, Farina has made the most of her opportunities, but her breakout performance finally came in the team’s most recent series sweep against Big Ten rival Michigan State.

On Friday, Farina recorded two hits — including an RBI single in Illinois’ 6-3 victory. But her solid outing proved to only be a prequel for what happened during Saturday’s doubleheader.

In the first game, Farina recorded a team-high three hits along with an RBI in the Illini’s extra-innings victory. In the following game, the junior’s hot streak continued.  Farina reached base during both of her plate appearances and matched senior Ruby Rivera and junior Maddi Doane for a team-high in RBIs with two. She finished the day batting .833 and slugging 1.167.

Last season, All-Big Ten First Team member Allie Bauch received most of the action at second base. But head coach Tyra Perry said that she expected a lot more from Farina in an increased role this season and enjoyed watching her have a career-day against the Spartans.

“I think she’s just been kind of finding her way,” Perry said. “This past weekend, everything kind of came together for her. Losing Allie was a big loss, so filling that spot was going to be tough, and Leigh Farina has definitely come in ready to play and stabilize our defense.”

Farina’s play not only garnered high praise from her teammates and coaching staff, but the conference also recognized her. Farina was named the Big Ten Softball Player of the Week for the first time in her career. In addition to her stellar play on offense, Farina also recorded nine putouts and 11 assists against the Spartans.

Illinois’ second baseman said she is proud of the accomplishment — especially considering how hard Perry and the coaching staff have pushed her to reach her full potential.

But despite the honor, Farina has her sights set on bigger and more team-oriented achievements.

Illinois has won eight-consecutive games and is ranked No. 25 in the NFCA Coaches’ poll. It’s the first time the team has been ranked in the Top-25 in six years, and the Illini are currently on pace to finish with more victories than they had one season ago.

“We’ve been saying it from the beginning of the year,” Farina said. “We set our goals as winning the Big Ten, winning the Big Ten tournament and making it to the World Series. You need to believe it and whole-heartedly go at it with everything you have. I think we have a great chance of making it there.”