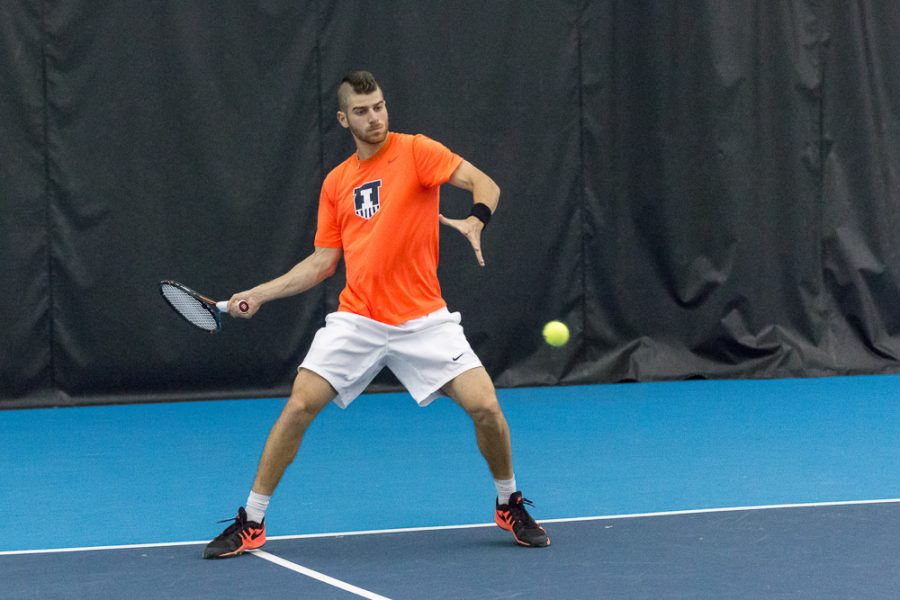 Illinois’ Aron Hiltzik gets ready to return a ball against Wisconsin at the Atkins Tennis Center on April 3.

At the end of the year with both the Big Ten and the NCAA tournaments looming, head coach Brad Dancer was not satisfied with Illinois’ play despite its 4-0 win over Penn State.

Dancer rounded up the team after the match ended, taking his players out into the field behind the Atkins Tennis Center’s outdoor courts and berated them.

The head coach yelled and jumped, just far enough away that it was difficult to hear what he was saying, but it was clear how he felt.

“We need to put some standards for all our courts (players), how we present ourselves at some courts,” junior Aleks Vukic said. “The win is good, just the guys weren’t where they should be, and he was really attacking that.”

The Illini came out looking like a team ready for the postseason, winning the doubles point without dropping any of the courts. Vuk Budic and Vukic won on Court Two, 6-3, to clinch the doubles point. Gui Gomes and Aron Hiltzik made quick work of their opponents on Court Three, winning 6-1.

Vukic continued his streak of singles wins, now up to 17, with a 6-2, 6-1 match victory that had his opponent smash a ball into a wall in between sets in frustration.

“I’m getting to my forehand well,” Vukic said. “Everything I can improve a bit.”

After Vukic, Kovacevic finished his match in similar fashion, winning 6-2, 6-1 on Court Four.

When those two were done, it wasn’t apparent who was going to get the fourth point on the board for the Illini and clinch their sixth win in a row. Gomes had lost the first set and was in a battle in the second to keep himself alive, and Hiltzik—who had won the first set—was down 1-4 in his second set.

Even Noe Khlif, who had been a steady force for Illinois toward the bottom of the lineup, was down in the second set after losing in the first set.

On Court Five, however, freshman Zeke Clark was up 5-4 in the second set after winning the first set, 6-2.

“I knew after Kova finished, I knew if I closed it out I would clinch the match,” Clark said. “With that comes nerves; I was able to stay focused and pull it out.”

Even after losing the ninth game in the set to make it 5-4, Clark still played with the energy that had got him to that point.

Vukic said that the team has to have trust in the freshman, and that trust was rewarded against the Nittany Lions.

The Illini are now 15-9 on the year and have won six straight, improving their Big Ten record to 8-2.