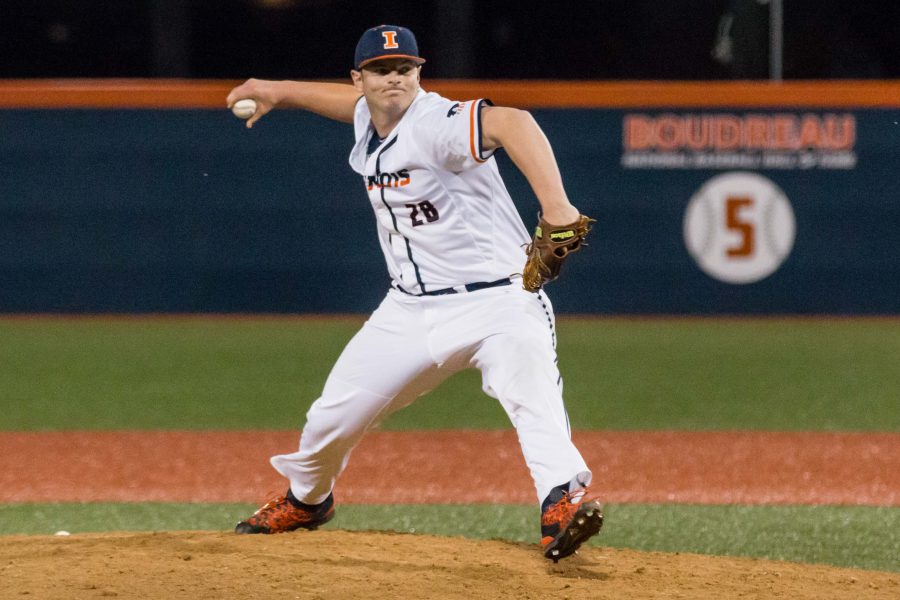 There were stories of a south suburban kid on the mound who would attack hitters. Scouts were impressed with his ability at the plate, especially after he hit .367 with four home runs and 27 RBIs in 2009.

One of the top prospects in the state, Naso was headed for big things in Champaign.

Suddenly, it all came crumbling down.

Naso strained the ulnar collateral ligament in his right arm during his senior year in 2011. A typical professional baseball pitcher has reconstruction surgery — colloquially known as Tommy John surgery — on his UCL.

“They advised me not to get Tommy John surgery,” Naso said. “I never really got to the same form I had in high school.”

He may have never regained the same form — his fastball topped out at 87 mph in 2016 — but he still contributed over the Illinois program’s winningest four years since the 1980s.

Naso arrived at the University in the fall of 2011 but was forced to redshirt his freshman season as he recovered.

His next four years at Illinois were spent working out of the bullpen.

Naso did not allow a run in 10 2/3 innings as a sophomore in 2014. Then he only made six appearances — totaling 5 1/3 innings — the following year when the Illini won a school-record 50 games and went on a 27-game winning streak.

While Naso made a minimal impact on the field as a junior, he said it was the year he enjoyed the most because of his teammates and how they drove him to work harder and be more competitive.

“The guys that were on that team in 2015 were the cockiest bunch of dudes at anything you do,” Naso said. “We’d be playing cards, and they’d be talking crap. It was a bunch of guys pushing each other, and it was a good mesh.”

The competitiveness was apparent as the senior came on the scene as one of Illinois head coach Dan Hartleb’s top options out of the bullpen. The Orland Park, Ill., native pitched 28 innings and had a team-low 2.25 ERA during the season. His ERA was lower than starting pitcher Cody Sedlock, who was the 2016 Baltimore Orioles first-round draft pick.

Unlike Sedlock, Naso wasn’t selected and his college career ended May 21, 2016. He allowed one hit and two earned runs in 2/3 of an inning on a sunny Saturday afternoon against Michigan.

“I miss just the day-in, day-out thing where you’re with your 35 best friends,” Naso said. “I’m never going to have that again in my life. You’re just going through the grind with the same guys.”

Note that Naso did not say he misses standing 60 feet and six inches away from a batter with aspirations to smash the ball over the 400-foot sign in centerfield. He also doesn’t keep himself up at night because he didn’t field bunts.

What Chuck Naso misses is being Illinois’ clubhouse guy.

During a rough 2016 campaign, the Illini went streaking — in a bad way. They lost seven of eight games in March and five of seven games in April en route to a modest 28-23 record.

Naso’s outgoing and quirky personality came in handy during a difficult season.

“It just made a lot of sense for me to always be a good guy in the clubhouse,” Naso said.

“I liked keeping the morale up and keeping a smile on guys’ faces and trying to make them laugh.”

The University of Illinois Student-Athlete Handbook provides expectations of student-athletes.

The handbook states, “Student-athletes…must uphold the University’s and Division of Intercollegiate Athletics’ high ethical and moral standards at all times, whether they are on the field or court, in the classroom or in the community.”

Naso would admit him secretly running a Barstool Sports Twitter account probably did not uphold those standards.

“I was one of the first three guys to make a Barstool college account,” Naso chuckled.

“I was the first Barstool Illinois (Twitter account). I had to be completely anonymous because I was playing. It was kind of a conflict of interest.”

“I was the first Barstool Illinois (Twitter account). I had to be completely anonymous because I was playing. It was kind of a conflict of interest.”

Unless you’re a 20-something-year-old male, chances are that you have never heard of Barstool Sports, the satirical sports and men’s lifestyle blog founded by Dave Portnoy.

The website began as a print publication in Massachusetts in 2004, but it has blossomed into a media empire.

Two of its most popular full-time bloggers, Big Cat and PFT Commenter, appeared on ESPN’s SportsCenter with Scott Van Pelt in February.

Barstool has branched out from being a national blog in recent years and runs eight local franchise sites, including one in Chicago. The blog expanded to college campuses a few years back when Naso became the University’s first Barstool viceroy.

Naso founded Barstool Illinois in April 2014, nearly at the same time as the University of Connecticut. Connecticut won the men’s and women’s national championships in basketball that year, which made creating viral content easy.

The Illini were in the midst of a bowl drought in football and coming off of a missed NCAA tournament in men’s basketball.

“I would scour the Internet and have to make a lot of Twitter remarks on (former Illinois head football coach) Tim Beckman,” Naso said. “It was something I would never be able to do on my own Twitter account.”

The former pitcher parlayed his Illinois viceroy position into a current job with Barstool Sports as a supervisor for the national viceroy program. Naso works under Dylan Stone, the director of the program, who goes by the alias “Tex.”

Stone got fired from the school newspaper and radio station at Rutgers University before graduating in December 2016 as the school’s viceroy. Following graduation, Barstool offered him a full-time job at its Manhattan office as the director of the program.

“I dropped a swear on my first episode of my radio show,” Stone said. “College students want to consume news in the vernacular that they speak in, and that was my goal for the viceroy program: ‘college news for college dudes.’”

When Stone started in January 2017, he was tasked with hiring four part-time workers to work as supervisors for the viceroy program. After going through 2,000 applicants, he invited 75 for interviews, including Naso who flew into the Big Apple.

“He’s a big boy,” Stone said of his first impression of Naso. “You could tell he used to play college baseball, but more importantly, you could tell he knew what he’s doing.”

Naso and three other supervisors — two of whom were fired for “not working their ass off” according to Stone — began running college Twitter accounts and creating content for Barstool in January.

Running Twitter accounts for a professional sports team may be a full-time job, but running college accounts with followings from a few hundred to a few thousand people is not.

Naso has a “real job” as a production assistant for 120 Sports in Chicago, creating highlights and writing scripts for the on-air talent. He works five days per week from 4 p.m. until 1 a.m.

As if being a viceroy and working for 120 Sports wasn’t enough, Naso most recently took on one final responsibility, one that ties in with his connections with Barstool and the University.

Dave Williams and Mike Sterk, known to Stoolies as the bloggers’ White Sox Dave and Barstool Carl, respectively, ventured into the world of podcasting before the start of the 2017 Major League Baseball season. Williams, a Chicago White Sox diehard, and Sterk, a Chicago Cubs fanatic, started Red Line Radio, a Barstool podcast.

Still, the podcast was lacking something that Naso could provide: humorous content.

“I saw their social media and how it’s going,” he said. “They had that gap where there was no video content coming out of it, so I just thought I could be that guy.”

Naso had several connections to find a way to become a content creator for Red Line Radio. He lives in Chicago; Williams is friends with his sister; he already works for Barstool, and Sterk was a former Illini pitcher.

Sterk, who graduated in 2010 from the University, had heard legends about Naso being an incredible pitcher — but also a funny guy — since his days playing high school baseball in the Chicago Catholic League.

“I feel like Chuck filled the void that was there when I left Illinois,” Sterk said. “He picked up the reins of being the team clown, the funny guy, which was my role. He has embraced that.”

The hosts had no trouble letting Naso join the show’s production team, allowing him to produce videos for the podcast’s Twitter account.

“I’ll get home at like two in the morning and edit a video for them,” Naso said. “I want to get my hands on anything that’s going to be successful.”

All in all, Naso works three jobs, two of them at Barstool. He sits in front of a computer editing videos and spends time on the Internet, tweeting for a living.

He follows the 2017 edition of Illinois baseball when he can, cracking jokes at the expense of his former teammates by, of course, tweeting.

Sterk calls Naso, “a bulldog on the mound.” Expect Naso to take on more roles inside Barstool and for him to keep attacking opportunities, just like the hitters he used to face.

Although, whatever happens, Naso said he isn’t going to throw “Barstool” in front of his name: he will continue being just Chuck Naso.

“He’s just getting started. The Internet is just finding out who this guy is.”