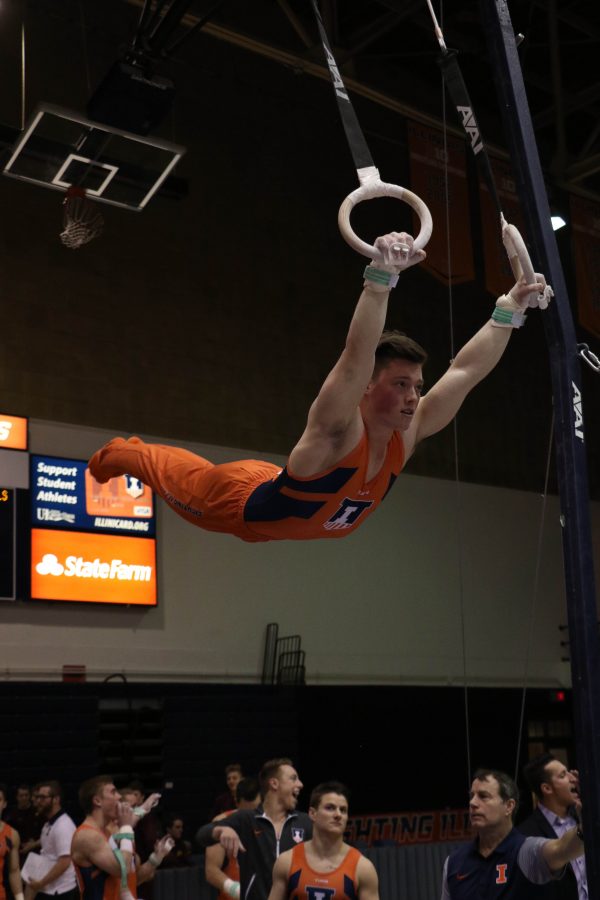 The Illini concluded their season Saturday, narrowly missing the ultimate goal of any NCAA team: a national championship.

Eggleston’s 14.600 on high bar was good enough for a second-place finish.

“I think, over the course of the next couple of days, I’ll reinforce the message that getting third place in the country is exemplary,” said head coach Justin Spring. “They did an amazing job, especially given the circumstances.”

The Sooners have not lost a college meet since finishing second at the 2014 NCAA championship.

Penn State, Iowa, California, Air Force, Michigan and Navy competed Friday, but did not qualify for the final round of competition.

The team scores determined placement from the two separate sessions of qualifying rounds.

On Friday night, Illinois scored 421.600 in the second qualifying round.

On Saturday night, Illinois began on vault. The team started strong with Baker and Diab tying season-best scores, 14.800 and 14.600 respectively.

After the first rotation, Illinois led the field with a score of 72.550.

After the third rotation, Illinois sat in third behind Oklahoma and Stanford. The Sooners surged ahead by 3.800 points and wouldn’t relinquish the lead for the remaining duration of the meet. Seven Sooners earned a combined total of 22 All-American honors.

During the fifth rotation, Illinois competed on pommel horse.

Senior Tom Gibbs lead off, recording a season-best 14.100, and Ngai — the defending national champion in the event —concluded the set with a score of 14.800. The Illini finished with a team score of 70.000 in the event, which for them was the third-highest mark of the season.

Illinois ended the night on rings, well behind Oklahoma by 10.100 points. However, the Illini performed at a high level in the event, recording a team-high score of 70.500. Diab concluded the night scoring 14.650 for the Illini, which later earned him All-American honors.

“Our best guys were injured and not at their best, so a lot of guys had to step up, and we had good, consistent gymnastics,” Spring said.

“That’s what got us to a very high level at the end of the year, and that’s commendable.”