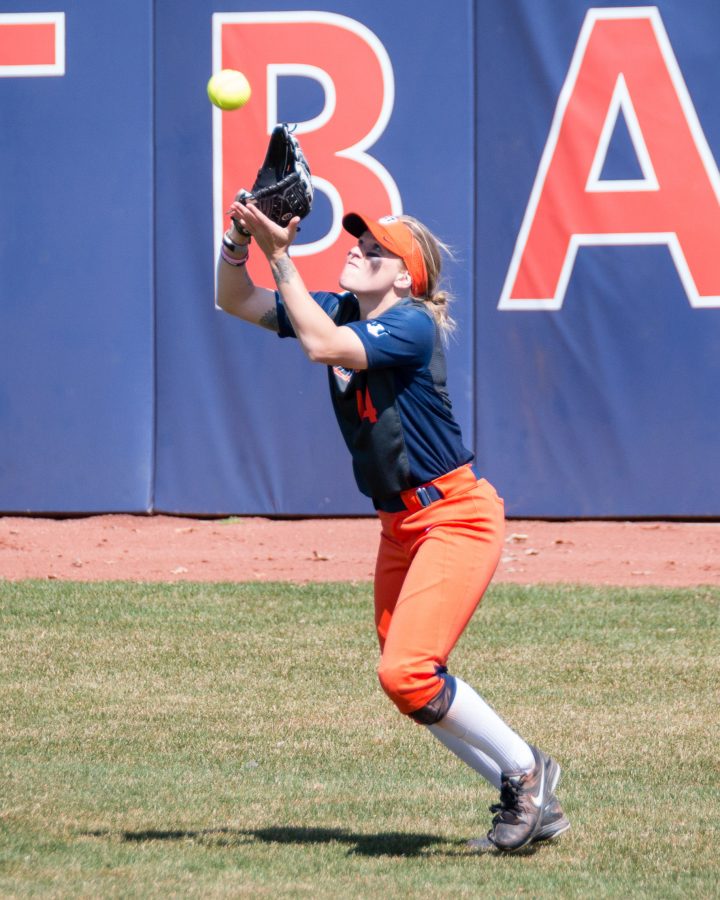 Tuesday marked the start of the Illinois softball team’s busiest stretch of the season.

The Illini are scheduled to play six games in six days — the first of which was against Eastern Illinois.

In the Illini’s last outing, they were shut out at home by Wisconsin. Trying to bounce back in its last nonconference game of the season, Illinois struggled to find a rhythm early and eventually lost, 4-3.

Sophomore Kayla Bear got the Panthers’ offense started from the game’s first at-bat. During her opening plate appearance, Bear singled off of sophomore Taylor Edwards. Three additional hits, coupled with a wild pitch from Edwards and a fielding error from sophomore Kiana Sherlund, allowed Eastern Illinois to take an early 1-0 lead.

“We were super flat,” Perry said. “But energy is the responsibility of the players. They’ve got to come ready to go. You can’t take anyone for granted, and today’s game showed that.”

The Panthers scored again in the top of the third, but the Illini were only shut out for two innings. Senior Alyssa Gunther drew a walk and was eventually brought home on a pinch-hit single by junior Rowan McGuire.

Illinois left two on base to finish out the inning but tied the game up in the bottom of the fourth. Junior Leigh Farina hit a leadoff single to left field and two batters later, junior Jill Nicklas, pinch hitting for Sherlund, recorded an RBI after a single of her own.

The game remained dead-locked at two before the Panthers scored two unearned runs in the top of the sixth inning.

After switching sides, Maddi Doane tried to jumpstart her team’s offense with a leadoff single. Illinois’ junior eventually reached third base on two Eastern Illinois errors, but her teammates could not capitalize. Junior Annie Flemming had the final chance to bring Doane home but struck out.

Still within striking distance, the Illini showed poise and resiliency during the final inning. With two runners on, McGuire pulled her team within one run on a sacrifice fly. Farina was next up to bat, and after working her way to a full count, she singled to left field.

With two on base, the stage was set for Illinois to earn a walk-off victory, but Eastern Illinois secured the win after a fly out by Doane.

“I think that we definitely still had a chance to win the game,” Farina said. “When we’re down, I would never really count us out because we’re a good-hitting team. I know we were losing, but I thought for sure we were going to come out with a win on that.”

Senior Nicole Evans entered the contest one home run away from tying Angelena Mexicano as the all-time home run leader in Illini history. But in her four at-bats against the Panthers, she didn’t record a hit.

This season, Evans was named the Arthur Ashe Jr. Female Sports Scholar of the Year and awarded the Big Ten Medal of Honor. Perry said that she will do all she can to help her team-leader get out of her funk.

“Nicole’s a tough kid,” Perry said. “But something’s kind of off with her a little bit, and we’ll keep working with her to get her on.”

Illinois will suit up again tomorrow to take on Northwestern in a doubleheader. The conference foes were originally scheduled to play April 5, but due to inclement weather, the games were canceled. Normally, the Illini don’t play back-to-back games during the week, but Perry isn’t concerned with the team’s tight schedule.

“It can be a great week if we play ball,” Perry said. “Today was an opportunity that if we had just played our game, we would have been fine but we didn’t. Any time you can step out on the field and play your game, then it’s a great day for us.”