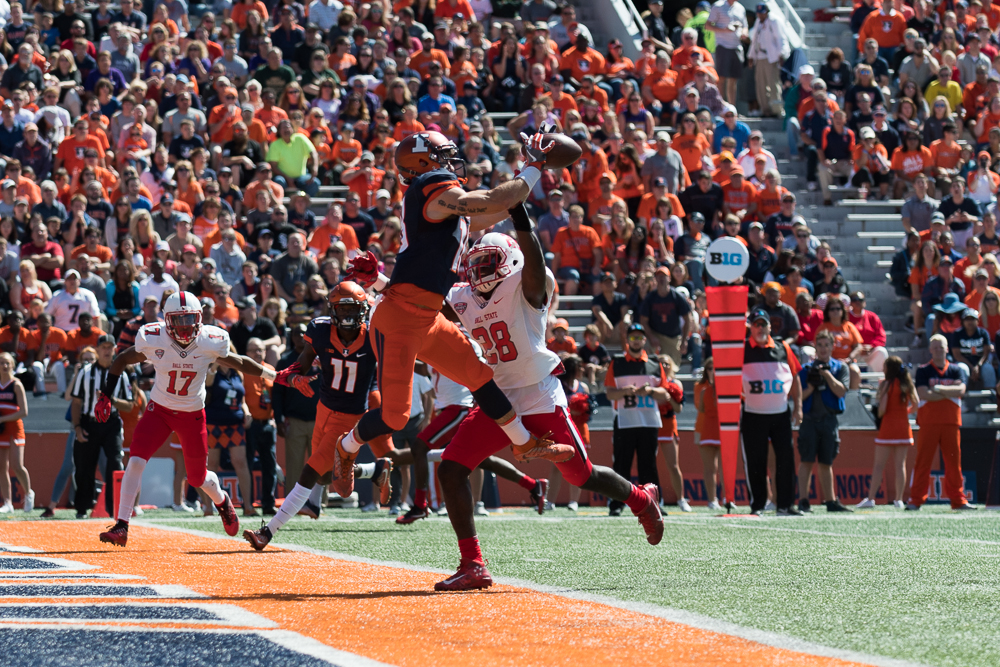 Wide Receiver Mike Dudek catches a pass from quarterback Chayce Crouch in the first quarter of Saturday's game. It was the first game Dudek played in since 2014.

Junior Mike Dudek was a bit embarrassed when he sent his brother the video of his first attempt at returning a punt Saturday against Ball State.

Cardinals’ punter Nathan Snyder sent the ball high into the air but did not get as much on his kick as Dudek was expecting.

The shorter kick caused the junior to run roughly 10 yards in to receive the punt.

Deciding not to call for a fair catch, Dudek just caught the ball when an oncoming defender leveled him.

But Dudek redeemed himself later in the game.

Illinois found itself down 21-16 with less than four minutes left to play in the game.

The Cardinals were ready to punt after the Illini defense came away with a third down stop.

Dudek stepped onto the field once again for his third punt return attempt.

He received the ball off one bounce, made a quick move toward the left sideline and cut in.

Then, he was off.

Dudek used his quickness and shiftiness to flip the field for the Illini, bringing the ball back 52 yards to the Ball State 35-yard line.

“I had a whole stampede of blockers in front of me who did a great job,” Dudek said. “To make a play to help my team get in a position to score, it made myself feel good, but it wasn’t done just by me.”

Coaches and teammates surrounded Dudek, understanding how much that return changed the game.

Head coach Lovie Smith said he has seen a lot of football and understands how vital a player like Dudek can be to a team.

“When you haven’t played that long and you wanted to return punts, you want to get his hands on the ball as much as possible,” Smith said. “A lot of games come down to your playmakers in critical situations stepping up and making plays.”

Two plays later, freshman running back Mike Epstein punched in a one-yard score to put the Illini up one.

Illinois went for two and succeeded after quarterback Chayce Crouch dove into the endzone. The conversion gave the Illini their final points of the day, which would be enough for a 24-21 victory.

Dudek also hauled in the first points of the day for Illinois after Crouch hit him on a 16-yard touchdown pass.

Offensive coordinator Garrick McGee was relieved that Dudek got that first game behind. He said that he hopes people can now focus more on his game rather than his knee.

“I’m not going to lie; I wanted to get (Dudek) the touchdown right then and there (at the beginning of the game),” McGee said. “We knew the look. Let’s just get him in the end zone and get everybody settled down and not worry about if Mikey is still ready to play or not.”

Dudek seemed as if he missed no time at all after his first game back from injury.

The junior said he could not stop watching that last punt return because it put Illinois closer to its first victory.

“I’ve watched it about 30 times,” Dudek said. “I still think I should have scored and kept moving around on the outside, but it’s a lot easier said than done. I’m just happy I was able to put our team in a position to win.”