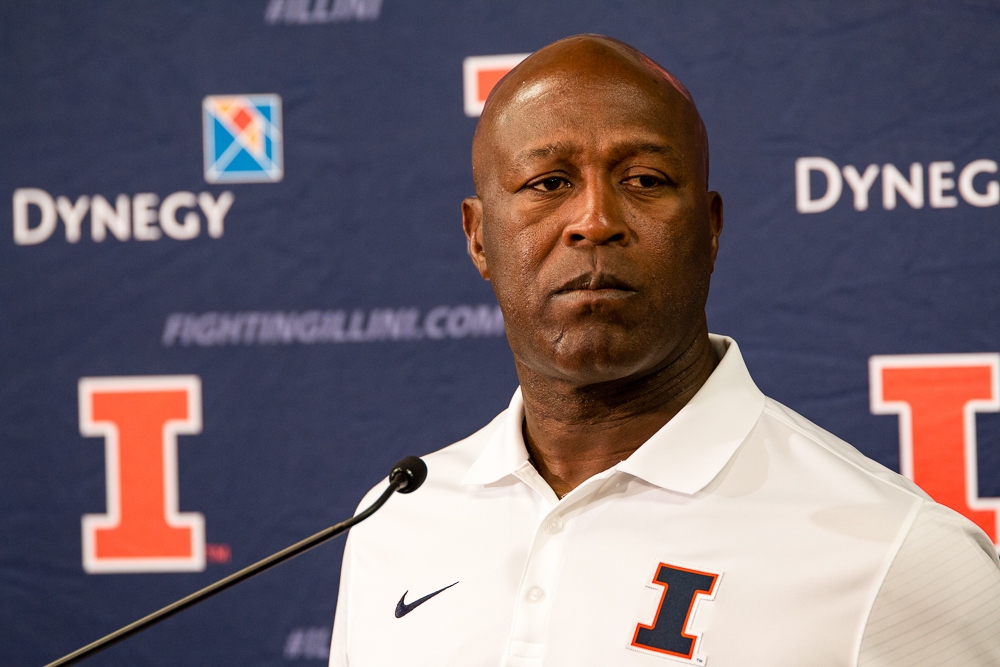 But when asked about the recent national anthem protests in the NFL last weekend, Smith had plenty to say.

President Donald Trump’s words at his Alabama rally last week did not meet the standard of respect that Smith expects from the office. Trump referred to any player kneeling for the national anthem as a “son of a bitch” for what he believes disrespects the flag.

Many NFL players knelt during the national anthem before Sunday’s games.

Some players, like New England quarterback Tom Brady, stood but linked arms with teammates during the anthem. Seattle, Tennessee and Pittsburgh decided to stay in their locker rooms while it was played.

Smith said he wants his players to voice their thoughts on current events and be educated with what they have to say.

“I think there’s certain things you expect (the president) to say and certain things you don’t expect him to do,” Smith said. “The presidency of our United States, there’s a certain level of respect and just how you assume that position would behave in every situation, and that’s not the case right now.”

The head coach said he has continued telling his players to get involved in their communities to make their thoughts on society known.

Junior linebacker Tre Watson echoed many of Smith’s sentiments and said Smith has remained vocal about allowing his players to voice their opinions.

Watson commented that some people in society seem to be misinterpreting why the NFL players were protesting and need to understand the scope of the situation.

“It needs to be said; it needs to be talked about,” Watson said. “The good thing is is that the protests are getting the discussion brought up, but it just needs to be about the right things and not about protesting the flag or the anthem. It’s about the inequalities and the problems going on in our society now.”

Senior running back Kendrick Foster also weighed in on the recent happenings in society.

Foster said he disagreed with Trump’s comments over Twitter and at his Alabama rally.

“I thought it was a misconduct by the president to say some stuff like that,” Foster said. “I’m very happy of what our professional teams did on Sunday of just embracing what Trump said and coming together as a whole NFL organization.”

Foster and Watson said they appreciate how their head coach has approached the recent societal events. They understand that if they have thoughts on anything happening in the world, they are free to let people know about it.

“He’s been in a Super Bowl; he’s been in the NFL, just having him on our team as a head coach, just to be around his presence and learn from him is a blessing,” Foster said. “He does a great job just leading us; he’s a great coach and great person overall.”

Illinois plays Nebraska Friday night at Memorial Stadium, but fans should not expect to see any effect from the president’s words.

Players on both teams are not on the field during the national anthem at Illinois home games. Smith said he does not plan on changing up any pregame activities.

“What’s happening right now doesn’t dictate how we do things,” Smith said. “We don’t come out before; we are not going to now, but our guys all have opinions about what is going on.”