IlliNOISE Night is loudest yet 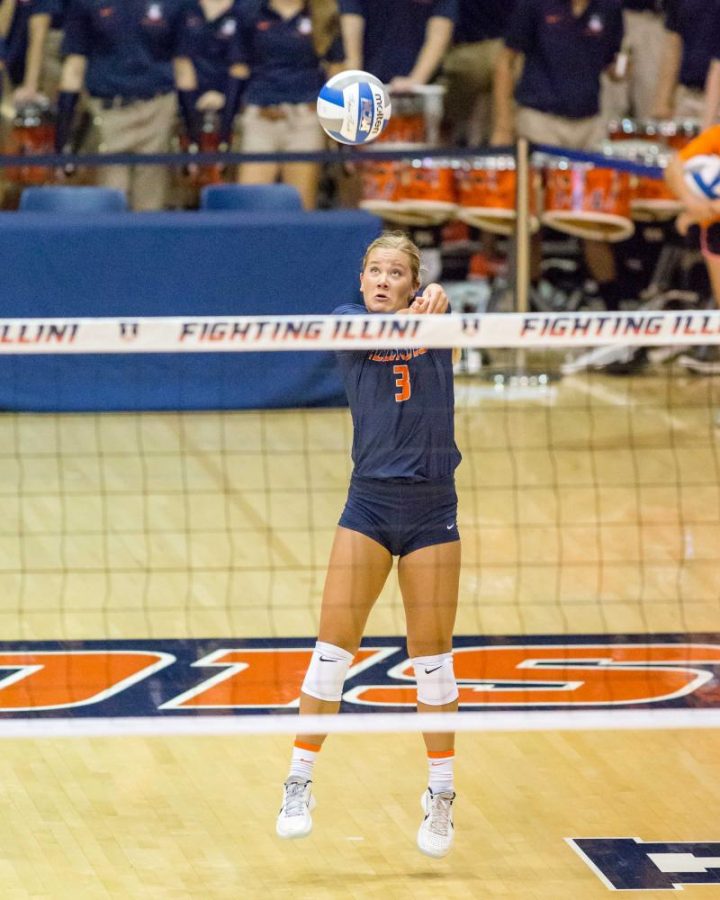 Illinois defensive specialist Brandi Donnelly (3) passes the ball during the match against Purdue at Huff Hall on Friday, October 6. The Illini lost 3-0.

The Illinois women’s volleyball team was welcomed home last Friday night by thousands of fans and 116 decibels of sound during the fourth annual IlliNOISE Night at Huff Hall.
Although the Illini were swept by No. 13 Purdue, fans and the Marching Illini set a noise record that surpassed last year’s 112 decibels.
During the first year of the promotion, a sold-out crowd generated 105 decibels of noise. Each year since, Huff Hall has gotten louder.
Last week, head coach Chris Tamas said he was relieved to be coming home after five weeks on the road. He said IlliNOISE night would bring a “renewed sense of energy.”
Playing for the Illini home crowd is a unique experience, according to junior outside hitter Beth Prince.
“I’m just super excited to be in a hostile environment that is behind us instead of the other way around,” Prince said. “I think for a long time, the Spike Squad and the network of our giant fan base has been thought of as a seventh man on the floor.”
After their trip on the road, the Illini are now 13-4, with an away record of 6-1 and a 1-3 home record.
Illini Injury Report
The Illini had an unexpected injury Friday night against Purdue.
Lone senior libero, Brandi Donnelly, was removed from the match during the second set due to an undisclosed injury. Donnelly was sidelined and received treatment on her right ankle.
Tamas said Donnelly fell unexpectedly, but the team was able to battle into the third set.
“That’s not something you ever think of happening, especially in that position,” Tamas said. “You just don’t see that position go down very often. We had to scramble just to get a jersey for one of our players because the other (players) that would have gone in for her had already been in the match.”
Before leaving the game, Donnelly led the Illini with 11 digs, followed closely by sophomore Annika Gereau with 10.
Subbing in for Donnelly was freshman Emmaline Walters. She said that despite the circumstances on the court, she was happy to help her team.
“It was obviously very unexpected and very upsetting,” Walters said. “Brandi (Donnelly) is such a crucial part of our team, and it was a fast turn around, but it was good. I was happy I was able to help the team out but definitely a tough loss for us as a team.”
Limited information about Donnelly’s injury is available at this time.
The Illini in the NCAA
Illinois is ranked No. 22 among all NCAA volleyball teams.
Junior Ali Bastianelli currently leads the nation in blocks per set, as she currently sits 1.85 blocks above Florida’s Rhamat Alhassan with 1.72.
As a team, Illinois is ranked sixth for average blocks per set.
Bastianelli also has the third-highest hitting percentage among Division I players at 0.469. She is ranked second in the Big Ten behind Haleigh Washington of Penn State in first at 0.509.
Junior Jordyn Poulter is 29th in the league for assists per set at 11.03.
In the Illinois record books, a handful of Illini are approaching career and school bests.
Senior libero Brandi Donnelly is second among Illini for in average digs per set. She tallies 4.40 digs within 415 sets. She approaches the number one slot by 0.14 digs and eight sets.
Donnelly also sits at third for total digs with 1,827 digs. She trails Ashley Edinger’s second-place spot by 94 digs and eight sets.
Bastianelli is seventh for career block assists, tallying 431 in 287 sets. She’s just two assists shy of Katie Stadick’s 433 in sixth place. The middle blocker is also making an impression on the record books with 470 total blocks in eighth place. Bastianelli is also second in blocks per set averaging 1.64, compared to Denise Fracaro who tallied 2.05 blocks in 244 sets.
Leave a Comment
MOST READ
1