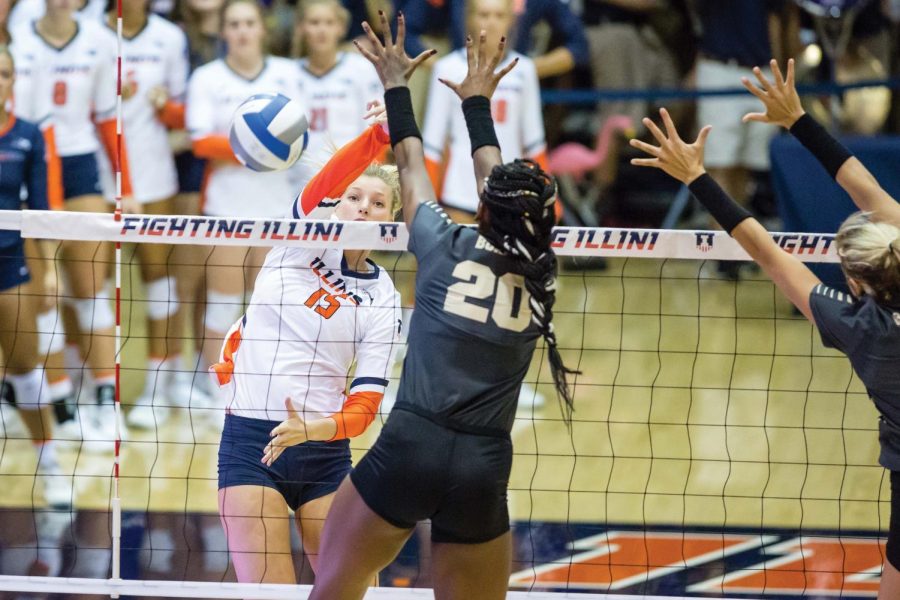 Illinois outside hitter Megan Cooney (15) hits the ball during the match against Purdue at Huff Hall on Friday, October 6. The Illini lost 3-0.

Illinois volleyball has undergone a complete makeover since last year.

The roster is full of new faces and is supplemented by the Big Ten’s largest freshman class. With nine new members and an overhaul of the coaching staff, one would barely recognize the team from 2016 to now.

Illinois volleyball has undergone a complete makeover since last year.

The roster is full of new faces, and it is supplemented by the Big Ten’s largest freshman class. With nine new members and an overhaul of the coaching staff, one would barely recognize the team from 2016 to now.

This season, freshman talents like outside hitter Megan Cooney and defensive specialist Morgan O’Brien have seen the court regularly.

According to head coach Chris Tamas, the strongest players in practice are the athletes that play in games. For the Illini, a slew of freshmen are beginning to emerge as the “strongest players.”

“Every spot’s available in my gym,” Tamas said. “If you prove you’re the best one in the gym, then you’ll earn a spot on the court. Everyone can’t have a spot, it’s the nature of our game — the nature of any game that you play, really.”

So far this season, seven of the nine freshmen have seen the court. But contributors like Cooney and O’Brien have averaged more playing time.

“There’s been a lot of competing at practice,” Cooney said. “Every day we’re competing for spots. They’re never guaranteed. The energy in our gym at practice has really carried over into our matches.”

Cooney has seen the most court time of any freshman, with appearances in 64 sets. She has scored 148 points for the Illini and locked down 123 total kills. Her offensive numbers closely rival that of veteran outside hitters Beth Prince and Jacqueline Quade, who have racked up 220 and 250 total kills, respectively. Last week, Cooney was also honored as Big Ten Freshman of the Week.

Alongside Cooney, O’Brien has been making waves of her own. She has seen the second-most court time of the rookie group, with appearances in 61 sets. O’Brien has tallied 138 total digs, and she is closing in on her more seasoned teammates, too. O’Brien is third for the Illini in total digs, behind senior Brandi Donnelly and junior Jordyn Poulter.

Recently, middle blocker Tyanna Omazic has begun to accumulate more minutes on the court. At the beginning of the season, Omazic briefly appeared in matches against Gonzaga, Air Force and Kent State.

Her early debuts were laced together with negative hitting percentages, but began to change over time.

Last week, Omazic played in a season-high four sets during Illinois’ match against Nebraska. During the game, she registered nine kills and hit at a .217 percent. In the month of October, Omazic was a force against Indian and Ohio State, where she hit .600 and .667 percent, respectively.

Omazic said she has seen her impact on and off the court increase as the season has gone on.

“I feel like I’ve contributed on and off the court honestly,” Omazic said. “Even when I’m on the bench, you’ve got to be there for your team, treating them well and making sure they’re on their game on the court.”

Omazic’s teammates have helped carve her path to recent success, she said. But her biggest contribution has been blocking.

“Offensively and defensively, I feel like I’m supporting really well,” Omazic said. “My biggest contribution that has been so far, I think, is blocking. I’m helping our offense to get up and hit the ball, but I think mostly blocking because I’ve been seeing more ‘on’ blocking. That’s what’s been helping me make it onto the court as well.”

Time on the court comes from a sharp work ethic in practice, Tamas said. But early on in the season, the freshman class spent time getting adjusted to volleyball at the Big Ten level.

Tamas said that he has pushed the upperclassmen to teach their new team members key aspects of Illinois volleyball and the pace of the game.

“With the large grouping of them, sometimes it’s difficult to get them all on the same page,” Tamas said. “ A lot of that ownership I put on the upperclassmen as well. When I was here in the spring, I mentioned to them on several occasions — to teach them how we want to work and how we want to operate. They’ve done a good job leading them to where we are now and will continue to hopefully do a good job in the future.”