Seniors aim to end their careers on a high note 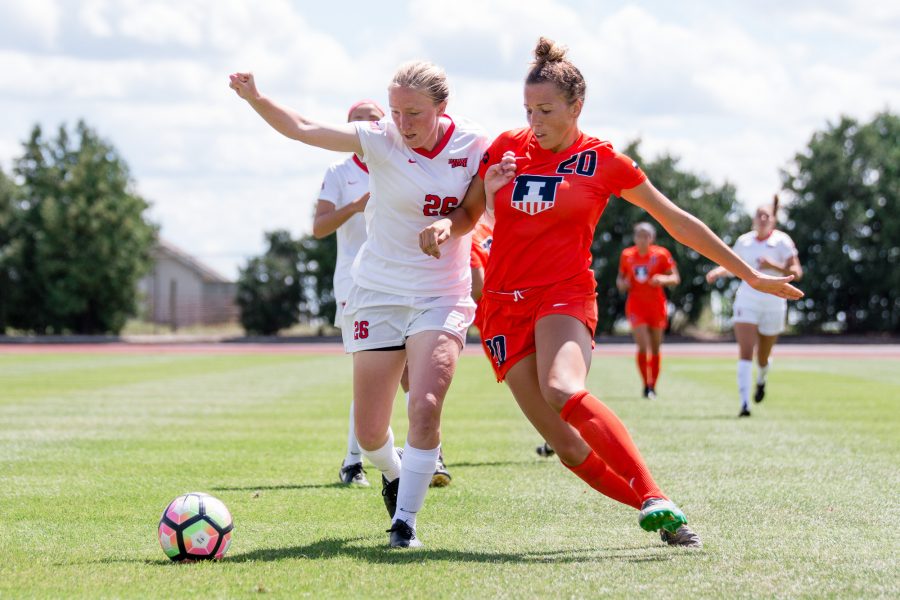 Illinois' Kara Marbury fights for possession of the ball during the game against Illinois State at Illnois Soccer Stadium on Sunday, August 21. The Illini won 1-0.

The four-year journey of the Illinois soccer team’s senior class comes to a close Wednesday night against Iowa, and although emotions will be riding high, head coach Janet Rayfield expects her players to channel those emotions and end the season strong.

“With any senior, as their career comes to a close it would be naïve to say that they (will) approach this game the same way,” Rayfield said. “The goal is to go out and compete to the best of their ability — that part stays the same — but the emotion that plays into their preparation is different. It’s a class that will relish this time on the field, but will also be sad that their (careers are) ending.”

Rayfield does not want her players to lose sight of the goal at hand: to improve every single day to build for the future.

For the team’s six seniors, however, there will be no preparing for the future. Their collegiate careers end Wednesday night.

Forward Kara Marbury knows that to finish her career on high note, she must continue the steady approach that has allowed her register a team-high three goals.

“I don’t think we’re approaching this game any differently; tomorrow (is) just another game,” Marbury said. “We’re gonna play well. Everyone will leave their heart on the field tomorrow. For the senior class, it’s definitely gonna be emotional, but we’re gonna go out there and help this team get a win.”

Marbury added some of her thoughts about her time in the program and how Illinois soccer has shaped her. She appreciates the life lessons beyond the pitch and the family she will forever be a part of.

“It’s definitely showed me to enjoy the little things,” Marbury said. “Each year we get new players and getting to know each person really opens your eyes to different perspectives out there. It’s nice to know we have a family behind us.”

Marbury is one of six seniors making her final appearance against Iowa, all of whom will surely take time to reflect on their last four years together, which Marbury has already done herself.

“I think each day I’m reflecting on my time here,” Marbury said. “The good times that we’ve had (and) the bumps that we’ve had overall (have) helped shape me into the person that I am today.”

Iowa (8-7-2 overall, 3-5-2 Big Ten) will be led by sophomore Illinois native Devin Burns, who has eight goals scored on the season.

The Hawkeyes still have the opportunity to qualify for the Big Ten tournament, but they will need help. A win in Champaign, along with a Maryland victory against Purdue, would see Iowa into the postseason.

However, it may be a tall task for Maryland, the team currently sitting in last place in the Big Ten, to go on the road against Purdue and come out with three points.

While the Illini may be without postseason aspirations, the chance to finish strong for a senior class that has always maintained a positive attitude would be a satisfying end to a season that has not gone according to plan.