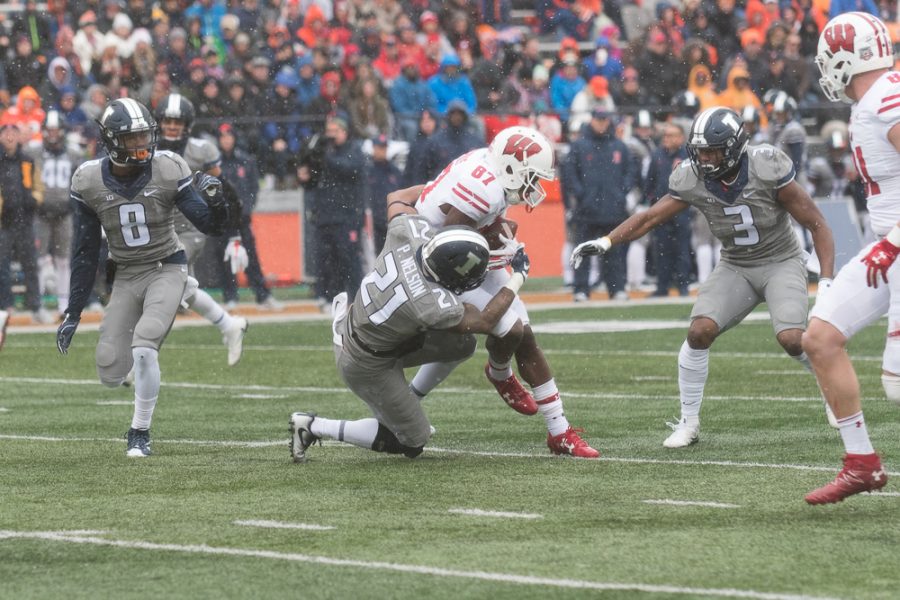 Editor’s note: The Daily Illini football writers graded each facet of the Illinois football team’s 24-10 loss to Wisconsin on Saturday. The Illini offense, defense, special teams and coaching were graded.

The Illini had every opportunity to make this game competitive, but once again the offense couldn’t get anything going. The Illini only scored three points through the first three quarters. The Illini quarterbacks, Jeff George Jr. and Cam Thomas, completed a combined nine passes on 31 attempts for 152 passing yards on the game, and Thomas threw two interceptions. While Thomas had another solid game running the ball, the Illini running back was unable to find much room to run against the Badgers’ solid front seven. The Badgers’ defensive line dominated the young Illini offensive line, sacking the quarterback five times and finishing with nine tackles for losses.

The Illini defense came to play against Wisconsin, and it kept the Illini in the game until the very end. The run defense was night-and-day compared to how it has been playing against the Big Ten opposition thus far, holding Wisconsin’s potent rushing attack to 3.7 yards-per-carry. Del’Shawn Phillips returned at linebacker and Pat Nelson returned at safety, and the two made a huge impact, combining for 18 tackles on the day. Without any help from the offense, the defense managed to hold Wisconsin under 20 points through three quarters. Bennett Williams continued his impressive freshman campaign at safety, picking off Wisconsin quarterback Alex Hornibrook early in the second quarter.

One of the biggest plays of the game came after Illinois stopped Wisconsin deep in its own territory. As the punt return team entered the field, it was called for an illegal substitution that gave the Badgers a first down. Wisconsin would end up scoring on that drive to give it an early lead. It was a mistake that totally shifted the tone of the game. Blake Hayes continues to impress this season, as he pinned the Badgers three times within the 20-yard line. Chase McLaughlin went 1-2, missing a 48-yard field goal that didn’t reach the uprights. The punt and kicking return games did not make any game-changing plays either. Not having a special teams playmaker has hurt the Illini this season with starting field position.

Defensive coordinator Hardy Nickerson prepared his squad well for the rushing attacks it had faced Saturday. Jonathan Taylor came into the game as the leading rusher in the Big Ten and has already set freshman records this season. The defense looked strong and ready to attack Taylor from the beginning of the game. Offensive coordinator Garrick McGee went with the two-quarterback system again, that proved rather ineffective for the second-straight week. It’s nice to get Cam Thomas in the game and give him valuable reps, but the offense is really struggling. McGee and Smith will have to evaluate how to improve Thomas’ throwing because he is one of the fastest athletes in college football.