Where Illinois volleyball stands as the postseason approaches 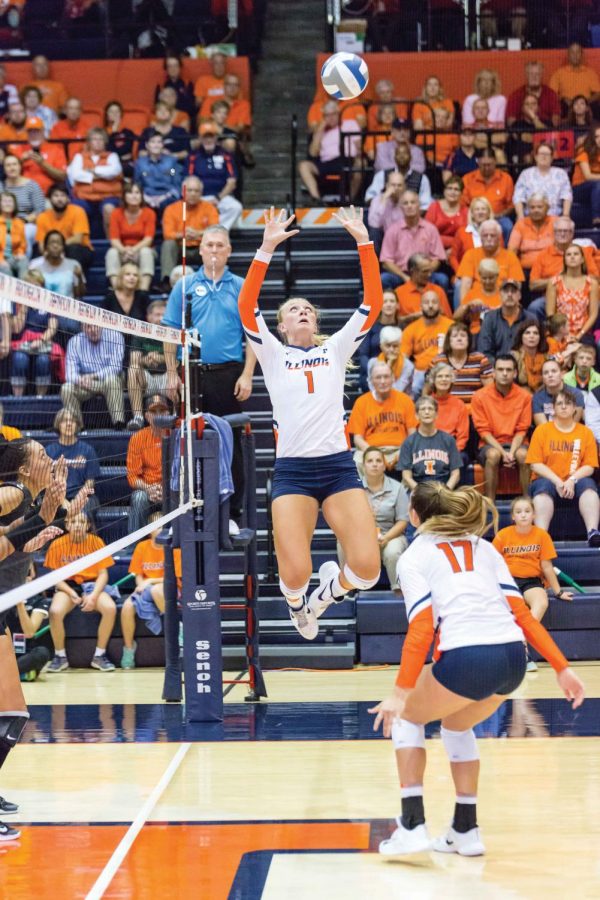 Illinois setter Jordyn Poulter (1) jumps up to set the ball during the match against Purdue at Huff Hall on Friday, October 6. The Illini lost 3-0.

Illinois in the NCAA

With the postseason on the horizon, the Illini are hovering around the edge of the NCAA’s top-25 ranked teams.

Four Big Ten teams are slotted among the top 10, along with No. 13 Michigan State and No. 20 Purdue inching their ways closer to the top. Illinois has yet to see a handful of these teams for the first time this season, and meetings down the road will significantly affect Illinois’ position — and inclusion — in the rankings.

Junior middle blocker Ali Bastianelli still leads the NCAA in average blocks per set with 1.76 – only .1 above Texas’ Chiaka Ogbogu. The Illini also fell three places from No. 6 to No. 9 this week in team blocks per set. The team trails Washington State at 3.02 by a mere .02 average blocks.

This week, junior middle blocker Blayke Hranicka broke into the NCAA top-50 hitting percentages at .365. Hranicka has recorded 95 kills on 200 total attacks so far this season.

She now sits at 3,170 assists in lieu of Illinois’ loss to Penn State. According to the program’s record books, Poulter trails Betsy Eiserman with 3,578 career assists. Melissa Beitz set the program standard with 5,797 assists in her four years at Illinois.

This season, Poulter has appeared in 81 sets and produced 892 total assists. In 2016, she tallied a career high of 1190 assists.  She locked down a season-high 60 assists early on this season against Colorado.

Saturday night, senior Brandi Donnelly went through full warmups alongside teammates for the first time since her knee injury. Donnelly injured herself during the Illini’s home match against Purdue on Oct. 6.

According to head coach Chris Tamas, she has since been deferred to rehabilitation. He said the team will be eager to have her back on the court when she is ready.

Despite her recent injury, Donnelly has still managed to coin a legacy for herself in Illinois record books. The Illini’s only senior is ranked third in career digs with 1,827. This season she recorded a season-high 25 digs in a five-set win against Missouri State on Sept. 16. Donnelly trails Ashley Edinger’s 1,921 digs in second. The overall record is held by Jennifer Beltran with 2,220 total career digs.