I get to be a fan this weekend 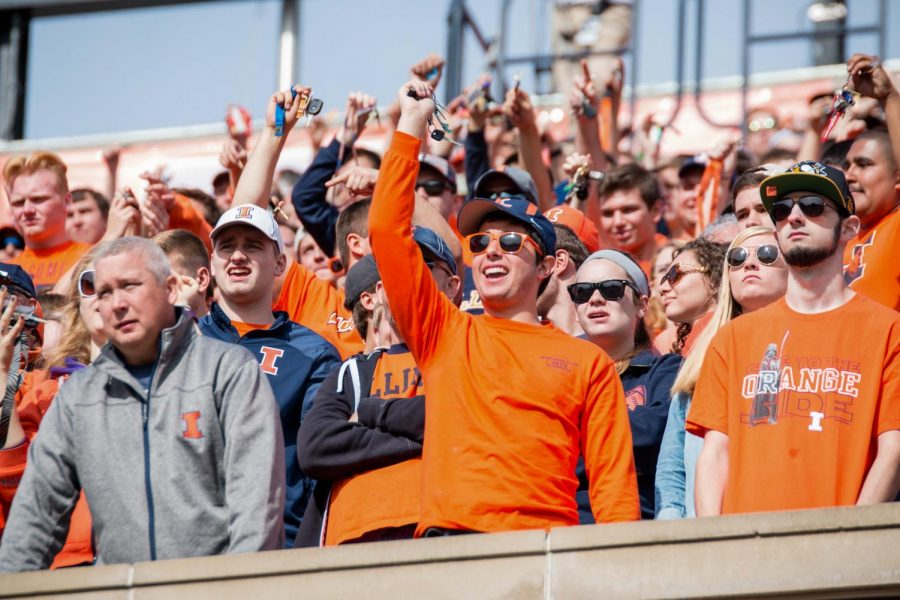 Fans in the Block I student section jangle their keys in the air during a kickoff in the game against Michigan State at Memorial Stadium on Nov. 5, 2016. Sports editor Cole Henke lists what he’ll get to do this weekend in the stands rather than the press box.

This weekend is Dads Weekend, and I am going to get to do something I haven’t done in nearly two years.

I am going to be sitting in the stands cheering for the Illini rather than up in the press box being a journalist.

This is a pretty normal thing for sports editors at The Daily Illini. My old editor, Charlotte Carroll, did it, and now she works at Sports Illustrated. I am going to do it, too, and hope that not doing journalism is what gets me a job.

But anyway, instead of trying to predict what will happen when the Illinois takes on Indiana this weekend, I am going to take the much more definite route of telling you what I am going to do during the game.

Here are my top five things I am going to do during Illinois football’s game day against Indiana.

I wrote a column a couple weeks ago about how I tailgated down at Ole Miss for its game against LSU. That was exciting, but I am much more ready to tailgate here. While Ole Miss was nice and warm, it is going to be unreasonably cold here in comparison, and I am so ready for that. I shouldn’t feel comfortable at a tailgate. Also, there was no room to toss a football around or play bags at Ole Miss. Those are staples of tailgating, and honestly, I don’t consider it a real tailgate without them. I don’t know what it is, but I feel like everything I do at the tailgate will make the entire rest of the game more bearable.

No. 2: Wear orange and blue

Something happened to my closet when I joined The Daily Illini. It got a whole lot less orange. I only have one orange T-shirt, one pair of Illinois sweatpants, one Illinois hoodie and a football jersey from my freshman year. That’s it. When I got to the University my freshman year, half of my closet was orange and the other half was blue.

I haven’t worn school colors to a sporting event probably since the last time I went to a football game two years ago. I will wear them to class, but it will feel good to wear them in the stands at Memorial Stadium.

When I was a sophomore, I was on the Illini Pride Executive Board. I spent the whole year cheering on Illinois sports. I didn’t return my junior year, and I started working more at The Daily Illini instead. The last sporting event I cheered on here at Illinois was a baseball game my sophomore year. Since then, it’s been all journalism.

Here is my favorite story from my first year covering football.

It was the second game of last season. Illinois was taking on North Carolina in the biggest game for Illinois football in years. It was Lovie Smith’s second game as the head coach of the Illini, but the first game was against a bad Murray State team, so it was basically his first game. The stadium was packed, the fans were cheering and I was stuck in the press box. It was maddening.

I sat there on the edge of my seat through the first few plays, hoping for something wild to happen.

Then, something wild happened.

They remind the people in the press box before every game that there is no cheering allowed, and I definitely followed that rule during the first game.

But when Ke’Shawn Vaughn broke downfield through the North Carolina defense for that touchdown on the first possession, I broke the No. 1 of journalism. I slapped my hand on the desk in front of me, jumped out of my chair and let out a big “Let’s go!”

Charlotte Carroll basically had to tackle me. It was hilarious, and I even got a gentle reminder that there is no cheering in the press box.

It is going to be so nice not hearing that little warning before the game this weekend.

No. 4: Eat a chicken strip basket at halftime

I lived off of a good halftime chicken strip basket through my first two years of college. I don’t know what it is about them, but it is an amazing stadium food. I had one nearly every single game, especially the 11 a.m. games. Have a nice breakfast, go to the game and by halftime, it is almost 1 p.m., and it is time for lunch.

Catch me at the concession stand at halftime this weekend. Not much else to say here.

It is going to be an incredible feeling to watch an Illinois football game and not be worrying about deadlines or columns for a while. I am going to this game with no other plan than to watch the game.

I won’t be planning questions to ask at the press conference. I won’t be staring at a box score the whole game. It will just be a nice day chilling with my dad in the stands at an Illini football game — something that I haven’t gotten to do in a really long time — and I am pumped.