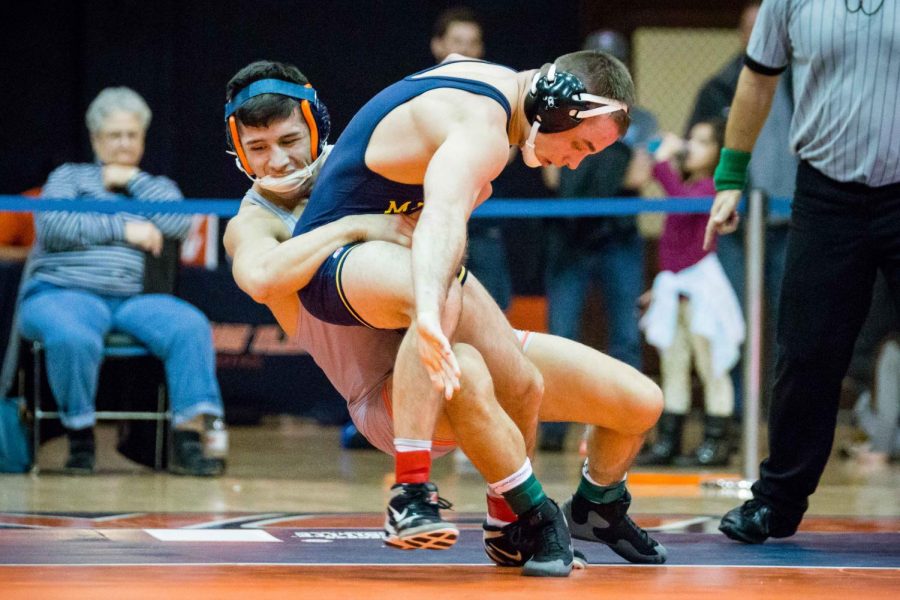 Illinois' Isaiah Martinez wrestles with Michigan's Logan Massa in the 165 pound weight class during the match at Huff Hall on Friday, January 20. Martinez won by decision and the Illini defeated the Wolverines 34-6.

It all came down to a pin in the final match.

In a matchup that featured multiple ranked wrestlers on each side, No. 15 Illinois narrowly dropped a heartbreaker against No. 7 Iowa at Carver-Hawkeye Arena. Illinois was determined to make a statement by pulling off the upset against a top Big Ten opponent, but the team fell just short. Iowa’s Sam Stoll pinned Illinois’ Deuce Rachal in the final stages to earn an 18-17 victory.

Illinois head coach Jim Heffernan, a former Hawkeye wrestling great, was encouraged by the effort his team put up, but he was disappointed to not finish it off with a win.

“The guys competed well, won the toss-up (matches) and had great momentum,” he said. “We really competed and had multiple opportunities to win. The guys responded well in a tough environment, hate to leave here on the losing end.”

Illinois cruised to a large lead early. The young Illini silenced Carver-Hawkeye Arena quickly in the beginning. They led 9-0 after three matches, with decisions from sophomore Travis Piotrowski and redshirt freshmen Dylan Duncan and Mike Carr.

Piotrowski got Illinois on the board first with a 6-4 win against Justin Stickley. He had a takedown in the middle of the first period to take the lead and finished the match off with another takedown in the second period. This victory was Piotrowski’s seventh of the season,  who has still yet to lose. Even in victory, the sophomore was critical of himself and wants to do better.

“I felt like it wasn’t my best performance. I felt like there was a lot more in that match that I could’ve done. It sucks, but I just got to keep on working,” Piotrowski said.

After Illinois’ early lead, Iowa came back with a pair of decisions from No. 2 Brandon Sorensen and No. 3 Michael Kemerer. Their victories against Eric Barone and Kyle Langenderfer placed the Hawkeyes just three points behind the Illini.

However, Illinois responded with some victories of its own. No. 2 Isaiah Martinez dominated his matchup, winning by technical fall, while No. 12 Emery Parker completed a come-from-behind victory by decision. The victories by Illini veterans stretched Illinois’ lead out to 17-9.

Martinez continues to add on to his impressive resumé every meet. He scored three takedowns in the first and second periods and added five more in the third to defeat Iowa’s Kaleb Young by a score of 23-8. The victory is Martinez’s 101st of his career and moves him into a tie for 24th on Illinois’ all-time list. The wrestler he’s tied with is Illinois legend Jesse Delgado, who was a former two-time NCAA champion.

In Parker’s match, he trailed 3-2 entering the third period, but dominated the final two minutes to earn a 5-3 victory. The go-ahead takedown was scored with about a minute and a half remaining.

Illinois was leading by eight points headed into the final two matches and looked ready to pull off the upset, but redshirt juniors Andre Lee and Rachal were unable to finish Iowa off. Lee narrowly lost to No. 10 Cash Wilcke, as Wilcke pulled of a sudden victory with eight seconds left. Rachal was Illinois’ final hope, but he was pinned by No. 7 Stoll in the first period.

A close loss like this would be hard to handle for any team, but Piotrowski remained optimistic afterward.

“Overall, I think the team did very well,” Piotrowski said. “In almost every way we did what we had to do. We wrestled smart, we wrestled tough and it just didn’t go our way at the end.”

Heffernan agreed that there were many positives to take away from this meet, but he also stressed that there is still a lot of work to do.

“I thought our overall effort was good, but I still think that we have a lot of improvements to make. We need to get better at having all 10 guys contribute to the team, but it’s evident to me that we are doing the right things and our guys are getting better,” Heffernan said.

The Illini now have three weeks off before returning to action. They will next be competing at the Ken Kraft Midlands tournament at Sears Center Arena in Hoffman Estates, Illinois on Dec. 29-30.

Piotrowski, among others, is ready to put this meet away and get ready for the next one.

“Obviously to come back after a close loss like this is pretty hard, but I think this is only making us hungrier for more competition and hungrier to prove ourselves to the other teams.”