A look back and a look ahead at Illini Sports 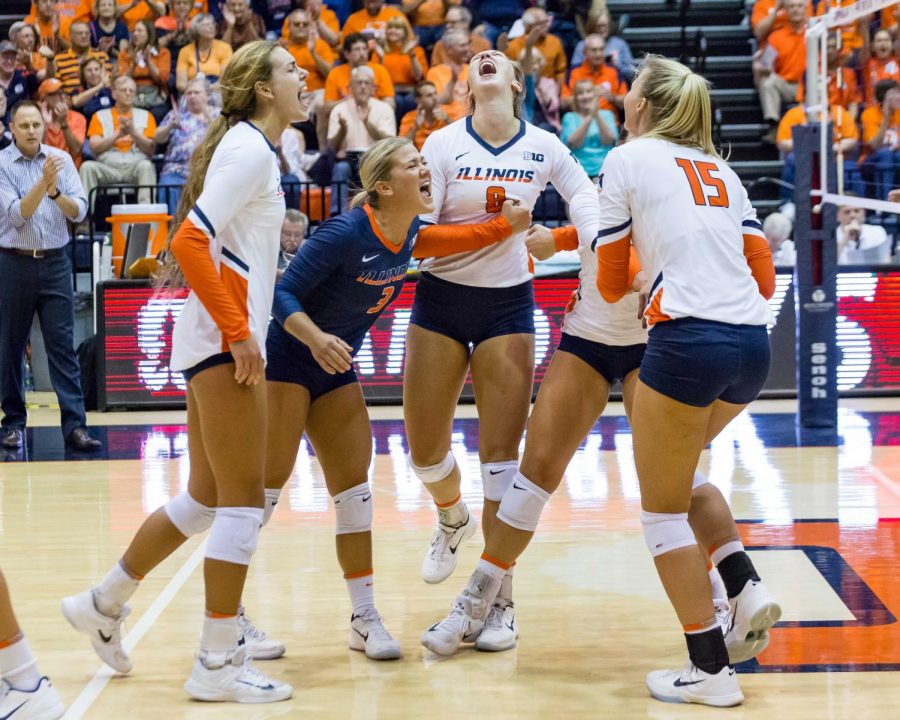 Illinois defensive specialist Brandi Donnelly (3) and her team celebrate during the match against Stanford at Huff Hall on Friday, September 8. The Illini lost 3-0.

At first glance, this fall semester of sports didn’t bring notable highlights. Football won two games, soccer won five, and men’s basketball has lost all its games to teams that matter. With Illini athletics this year, it is unlikely we will see any big, noticeable victories barring a few. The small victories are the ones to celebrate and these five moments are the ones we should remember from this semester.

Illini men’s basketball hadn’t had any flashy recruits before Brad Underwood came to town. He took the first step in improving that by getting Illinois Mr. Basketball Mark Smith back in the spring. Joining Smith in the backcourt next season will be 5-star combo guard Ayo Dosunmu, who committed to play for Illinois on Oct. 19. The Morgan Park senior, who will likely be named Mr. Basketball this year, is an exciting player who will give the Illini a nationally recognized backcourt next year. Dosunmu is the type of player who can change Illinois basketball culture back to what it used to be.

Josh Whitman continued his ambitious tenure as Illinois’ athletic director by announcing plans to build brand new soccer and track stadiums and facilities. Demirjian Park will be the name of the new soccer stadi um that will be built in time for the 2021 season. The current Illinois Soccer and Track Stadium will become just the track stadium. This much-needed upgrade will help attract new recruits to two teams that have had some recent struggles. Soccer and track will be back.

Cross country isn’t one of those fall sports where students clamor to follow or go watch live. I’ve never heard anyone say “Can’t wait to buy my cross country season tickets!” That’s fine. I am one person, though, who believes no athletic achievement should be overlooked, regardless of how much attention the sport gets. Illinois cross country runner Jon Davis became the first Illini to win the NCAA Midwest Regional championship since 2007. Davis clocked in at 29 minutes and 6 seconds to win the regional championship. Davis ran 6.2 miles in less than half an hour. Anyone can dribble a basketball or catch a football. Try doing that. The best route would be running from Allen Hall to the State Farm Center four times.

Men’s basketball has gotten off to a decent start: first six games won and then four tough losses to solid sides like Northwestern and Maryland. Going in, we all knew the stars would be Leron Black, Mark Smith and Michael Finke. I don’t think a single person expected the incredible story of Illini sharp shooter Aaron Jordan.

In his first two years with Illinois, Jordan scored 126 points. He only had 23 all of last season. After 11 games this season, he has equaled his point total from the last two years and leads the NCAA in 3-point percentage (62.5 percent). Even if Illinois doesn’t make the dance, at least Aaron Jordan’s incredible 3-point shooting will be remembered.

Every single student at this University should go to Huff Hall on a fall evening and watch Illinois volleyball. Not just because of the atmosphere or the intensity, but because volleyball is the best sport to watch in the fall. First-year head coach Chris Tamas led the Illini all the way to the Sweet 16 which included a five-set upset over 8-seed Washington in the second round. Tamas will be coaching all his players from this season except for master digger Brandi Donnelly. Losing Donnelly is big, but the process of Illini volleyball is at super speed compared to football or even basketball. This run was the by the far the best part of the semester.

It’s going to be a short winter break, so here are four quick things to remember and look forward to going into the winter and spring seasons of the new year.

Golf can win a conference double

Men’s golf is really good. That is no secret. They will once again be favorites to win the Big Ten Championship which would be the fourth straight and seventh in the last eight years. The men did struggle in the fall and sit at No. 22 in the country which is lower than the women who are at No. 15 in the nation. Renee Slone’s side finished seventh at the Big Ten Championships last year but are the third ranked Big Ten team. This could be the first time Illini women’s golf finished in the top two in the conference.

Of course, this is an easy pick. Can Underwood and Fahey improve on last season’s disappointing ends to Illini basketball? Will Illinois be one of the names in either bracket? We’ll see.

Isaiah Martinez will try and end his Illini career with four Big Ten titles and three national championships to complete one of the most legendary careers in Illini athletics history. The Big Ten Championships will be on March 4, followed by the NCAA Championships in Cleveland from March 15-17. Save these dates because he is the only athlete on campus who always wins.

Track and field are combined

Mike Turk will lead the effort for both genders in both indoor and outdoor versions.  This is a sport that always offers great excitement.