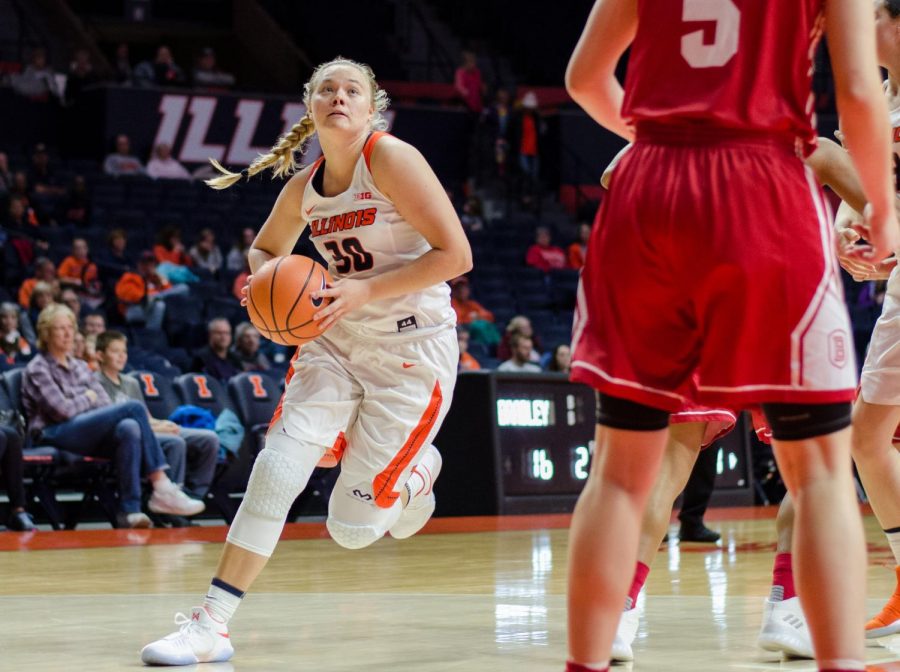 Courtney Joens drives to the basket during Illinois' game against Bradley on Saturday, November 18, 2017.

The Illinois women’s basketball team’s early struggles in conference play have turned them into the underdog on most nights. However, on Tuesday night, it was Michigan State who had to play from behind, as the Spartans responded from an early deficit to stroll to a 67-55 victory, moving the Spartans to 14-5 on the season.

Desperate to find a winning combination, head coach Nancy Fahey inserted sophomore guard Courtney Joens into the starting lineup, replacing Petra Holesinska. Early on, the Illini saw success as sophomore guards Cierra Rice and Brandi Beasley combined for 13 points and helped their team get out to an 18-16 lead after the first quarter.

The Spartans would rally in the second quarter, and, thanks to their full-court press, they forced six turnovers leading to nine points.

Beasley felt the Michigan State pressing prevented Illinois from playing fast, which is a staple of Fahey’s style.

“I definitely believe the press slowed us down at times, and we didn’t make the play by continuously attacking. That was the biggest issue with them pressing us today,” Beasley said.

The absence of senior guard Jaelyne Kirkpatrick was evident Tuesday, as Beasley was often the only player on the floor comfortable dribbling against the Spartan press. Rice, the interim second guard in place of Kirkpatrick, agreed that the tempo of the game dragged as a result of the press.

“I (had) to make better decisions to know when to dribble the ball or when to pass it. I don’t think it stopped us but it slowed us down,” Rice said.

Another turning point in the second quarter was the loss of junior forward Alex Wittinger due to foul trouble. She and Beasley have been the Illini’s most consistent performers, and Beasley felt that Wittinger’s time on the bench took away one of the Illini’s best playmakers.

“Alex is always a big presence but I feel like we have people that can step up in place of Alex, but we always feel she can help us make plays,” Beasley said.

From then on, turnovers plagued any chance of an Illini comeback, as the Illini gave possession away 10 times in the second half and would fall to the Spartans, pushing Illinois’ losing streak to seven and its record to 9-11 overall and 0-6 in the Big Ten.

Fahey noticed the disadvantage her team was at, and given the Spartans’ size and her own foul trouble, one could understand how Wittinger could only muster up eight points and seven rebounds.

“Michigan State is a very tall, long, fast team. We came out, played a lot of 2-3 zone,” Fahey said. “It worked for a while, but we just got really small when Alex went out of the game.”