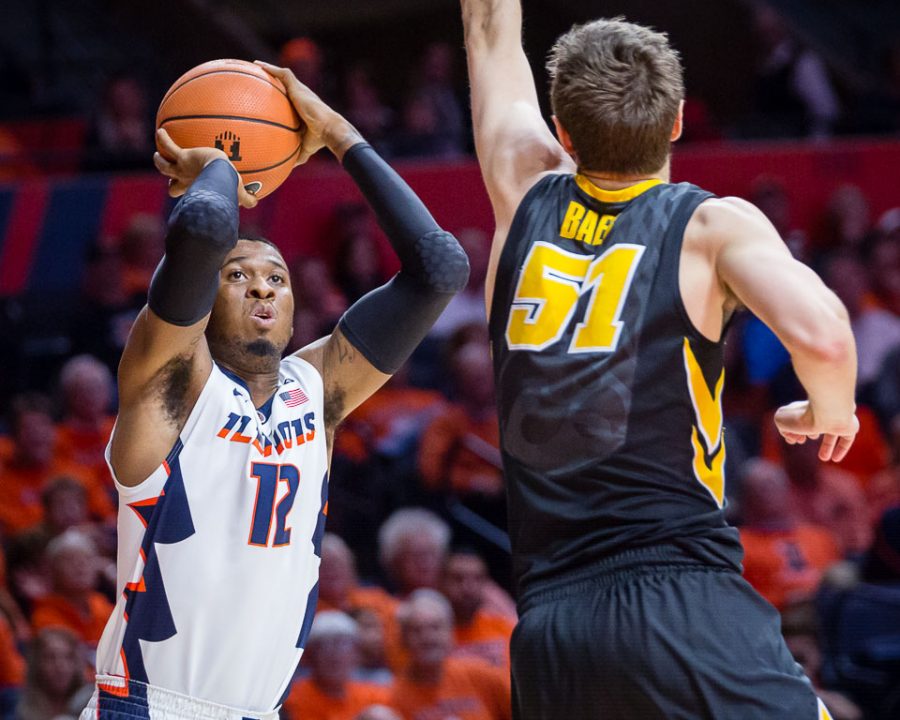 Illinois forward Leron Black (12) shoots a three during the game against Iowa at State Farm Center on Thursday, Jan. 11, 2018.

Over the past several games, the narrative has been the same for the Illinois men’s basketball team. It doesn’t know how to finish.

Going into Friday’s matchup with Wisconsin, Illinois had lost nine games by 10 points or less. This time around, the Illini struggled to even keep it close. They led for just 50 seconds in a 75-50 loss to the Badgers – dropping to 10-10 overall this season and 0-7 in the Big Ten. The team has now lost 12 consecutive games against Wisconsin.

“I’m really, really disappointed with our effort,” head coach Brad Underwood said. “It wasn’t everybody, but our effort from certain guys was substandard.”

Leron Black, like in most games this season, carried the offensive workload. He scored in double figures for the 16th time this year and netted Illinois’ first bucket of the game on a turnaround jumper. He finished with 16 points and three rebounds.

In the backcourt, Trent Frazier scored 11 points and dished out five assists. But he shot just 5-of-14 from the field and 1-of-5 from behind the arc. No other players scored in double figures for the Illini. Starting guard Mark Smith missed all five of his shot attempts and was held scoreless for the second time this season.

Wisconsin’s defense caused problems for Illinois early and often. On the Illini’s first possession of the game, the Badgers forced them into a shot clock violation. It was the first of 14 turnovers on the night. Wisconsin totaled a season-high 10 blocks.

Despite the rough offensive night, a few bright spots — other than Black’s performance — were the play of Greg Eboigbodin and Mark Alstork. Eboigbodin totaled eight points on 4-of-5 shooting and snagged five rebounds. Over his last five games, he’s averaged 7.4 points and shot 78.2 percent from the field.

Alstork didn’t shoot the ball well – going 4-for-11 from the field for nine points – but he crashed the boards and came up with a team-high 10 rebounds.

“You get seven offensive rebounds from a wing (player) and that’s a big, big number,” Underwood said.  “We challenged him and he responded. He’s playing awfully hard.”

The Badgers were led by Brad Davison and Ethan Happ. Davison scored a team-high 18 points. Happ chipped in with 16 points to go along with 10 rebounds. It was his fifth double-double in the last seven games. Four players on Wisconsin scored in double figures.

Illinois was outscored 32-18 in the second half of the blowout loss, and its 50 points are the team’s lowest total of the season. The Illini shot just 40.4 percent from the field and 7.1 percent from downtown. Frazier nailed Illinois’ lone 3-pointer of the night. Over the past two games, the team has shot just 4-of-32 from behind the arc.

Illinois has a couple days off before facing Michigan State at the State Farm Center on Monday night. Underwood knows his team will have to shoot the ball better to have a chance at upsetting the Spartans and snapping its five-game losing streak.

But more than anything, he expects his squad to bounce back with more energy at home.

“We have the moniker and the saying in our locker room, ‘Everyday guys’, and today we didn’t show up,” Underwood said. “That’s not anything I want to be about (or) want our program to be about. I take a lot of pride in that.”