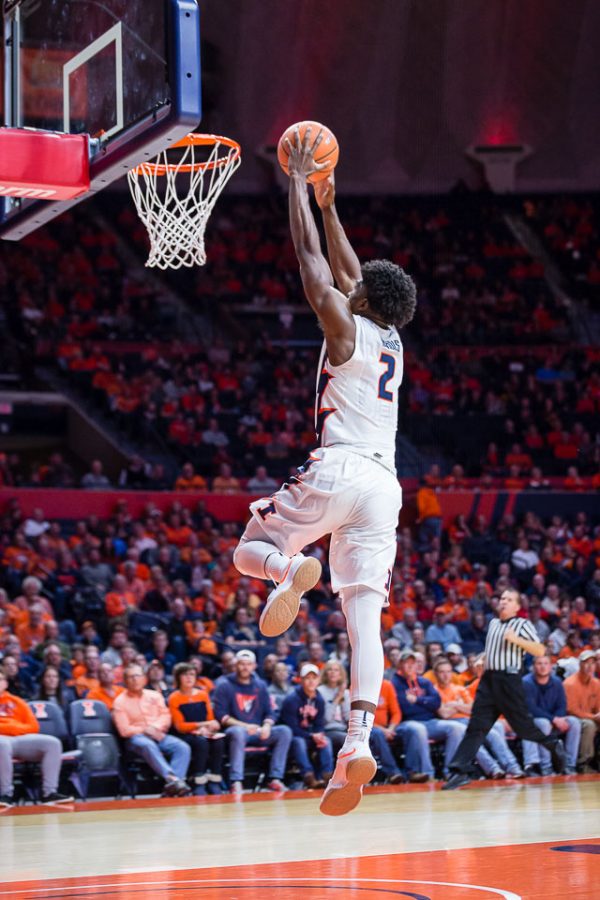 Illinois forward Kipper Nichols (2) rises up for a dunk during the game against Iowa at State Farm Center on Thursday, Jan. 11, 2018.

The last time the Illinois men’s basketball team started 0-8 in the Big Ten, Theodore Roosevelt was serving as the 26th President of the United States.

It was just the Illini’s second season ever. But during the 1906-07 campaign, the team finished 1-10 overall and dropped all eight of its conference matchups. Since then, Illinois has notched 17 Big Ten regular season titles, two Big Ten tournament titles and made five NCAA Final Four appearances.

But this season, under first-year head coach Brad Underwood, the Illini can’t get over the hump. After a 13-point loss to No. 6 Michigan State on Monday night, Illinois matched its worst conference start in school history. The Illini forced the Spartans into a season-high 25 turnovers, but were simply overmatched by Michigan State’s size and athleticism.

On Wednesday night, the team will have a chance to avoid an 0-9 conference start against a more manageable opponent in Indiana. However, Underwood believes it will still be another hard fought game.

“They’re very good defensively,” Underwood said. “They’re going to make us work to catch, to move the ball. They’re one of the better teams I’ve seen in their ball-screen coverages.”

The Hoosiers are led by forward Juwan Morgan. Morgan is averaging a team-high 15.4 points and 7.1 rebounds per game. He also leads Indiana in blocks and steals.

Underwood said Morgan will present a lot of challenges because of his versatility, but also took note of guard Robert Johnson. Johnson is ranked fourth in the Big Ten at 33.4 minutes per game and has also knocked down a team-high 38 three-pointers.

In Illinois’ last outing, the team got its usual offensive production from Leron Black and Trent Frazier. Frazier scored 13 points, his fourth double-digit scoring game in a row, while Black scored 12 points on 6-of-10 shooting. Black would’ve had the opportunity to score more but was plagued by foul trouble.

Kipper Nichols received extended playing time in Black’s absence and took full advantage. He finished with a career-high 27 points and nailed five shots from downtown. Included in his first 20-point game were a put-back slam over Jaren Jackson Jr. and a jab step jumper that broke Miles Bridges’ ankles.

Nichols has scored 14 points or more seven times this season, but he’s also had nine games when he’s scored five points or less. He believes the next step in his maturation is consistency.

“What (Underwood) preaches every day, being an ‘Everyday guy,’ that’s one thing I’m trying to make a habit of doing,” Nichols said. “He’s hard on me for a reason. … I’m realizing that and trying to take pride in that.”

Indiana’s Archie Miller is also in his first year as a head coach in the Big Ten. But unlike Underwood, he’s off to a much better start. The Hoosiers have won five games in conference play and three of which by four points or less.

Underwood said he’s known Miller for many years and commended him for the Hoosiers’ late game poise. But regardless of Indiana’s early success, he looks forward to going toe-to-toe with his new Big Ten adversary.

“We’re two prideful and very historic programs that have all had a lot success and had very successful, big name coaches that built those programs. “Underwood said. “That makes it pretty special.”