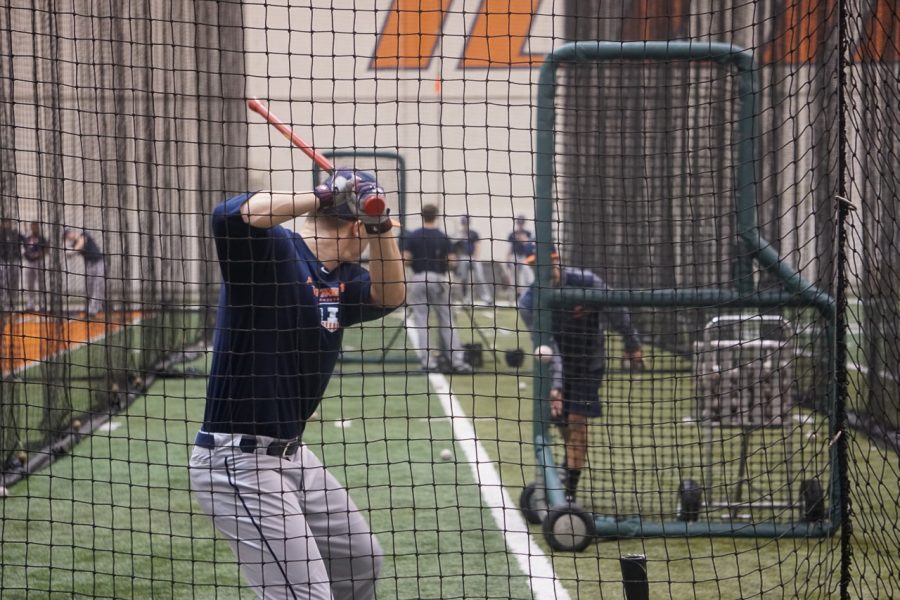 On Friday afternoon, with the sun shining amid unseasonably warm January temperatures, the inside of the Illinois football practice facility was buzzing with a different crowd than usual: baseball players.

The Illinois baseball team gathered for its first practice, shedding the routine of offseason workouts in favor of batting reps in the cages.

The squad has roughly three weeks until it heads down to Beaumont, Texas, for a three-game stint against Lamar, Texas Southern and Missouri State, which will open up on Feb. 16.

Though the eyes of outsiders naturally float toward that season opener, the team is focused on staying in the present and preparing as thoroughly as possible for the season.

“I think it’s just trying to go day-by-day, we don’t want to get too far ahead of ourselves,” sophomore second baseman Michael Massey said. “We’re just trying to stay in the present and work as hard as we can. If we do that, I think at the end, things will be good.”

Massey is returning from a breakout freshman season during which he started all 51 games at second base and was named to both the Collegiate Baseball Freshman All-America Team and the Baseball America Freshman All-America second team. He led Big Ten freshmen in hits with 69, and also helped the Illini lead the nation in double plays per game (1.16).

For Massey, the return to team practice marks a significant milestone, having undergone shoulder surgery in the offseason. Missing summer and fall ball was frustrating for Massey, but he is eager to get back to full action. Training with the coaches present, rather than in a players-only setting, helps bring a new level of excitement to the team, Massey said.

“When we’re in here by ourselves, without our coaches, it just feels like another offseason workout,” Massey said. “When we put the baseball pants on and the coaches are here, guys can really start to feel that we’re close and that excitement level picks up.”

Illinois head coach Dan Hartleb is back for his 13th season at the helm of the program.

Despite falling to match 2015’s Super Regional appearance last season — the Illini came in at 23-28 and 9-15 in the Big Ten Conference — Hartleb is confident that his team’s abilities and talent can lead to success this year.

“Physically, I know we can,” Hartleb said. “We didn’t win as a team last year, so part of this is going to be a learning process. Winning those tight games, learning to win, expecting to win.”

One of the qualities Hartleb hopes to see during the first few practices is energy from his players, and when the typical early season errors occur, he looks at how players react.

“We will probably make a lot of mistakes, and that’s okay, just getting re-acclimated to things,” Hartleb said. “I expect good hustle, I expect guys to have a great attitude with everything, and if they do make a mistake, not have poor body language. All the things that we expect throughout the year, I want to see in these first few practices.”

Hartleb noted that there are a number of positions where the starter is currently undecided, so identifying and evaluating which players will fit best where is an early priority for his staff. Third and first base starters, as well as the pitching rotation are priority areas where he will have to make decisions.

There is also the catcher position, where junior David Craan and senior Mark Skonieczny return after splitting time behind home plate last year. Champaign Centennial graduate Kellen Sarver and Jeff Korte — who transferred in from Eastern Florida State College — are also possible options for the Illini.

The coming weeks will be filled with reps at a variety of positions for certain players, and there will will be a big focus centered on getting fresh and in-tune for the opening slew of games in Texas.

Lots of competition for spots on the field leaves a lot of questions to be answered before the Illini see real action, but that is something Hartleb is pleased to be dealing with, rather than not having many options at all.

“So how are those things going to unfold? Who ends up in the bullpen? Who can handle those roles and who accepts those things? Again, a lot to figure out over the next three weeks,” Hartleb said. “But I like our talent. I like what we have on the team and I think all those competitions are going to be healthy.”