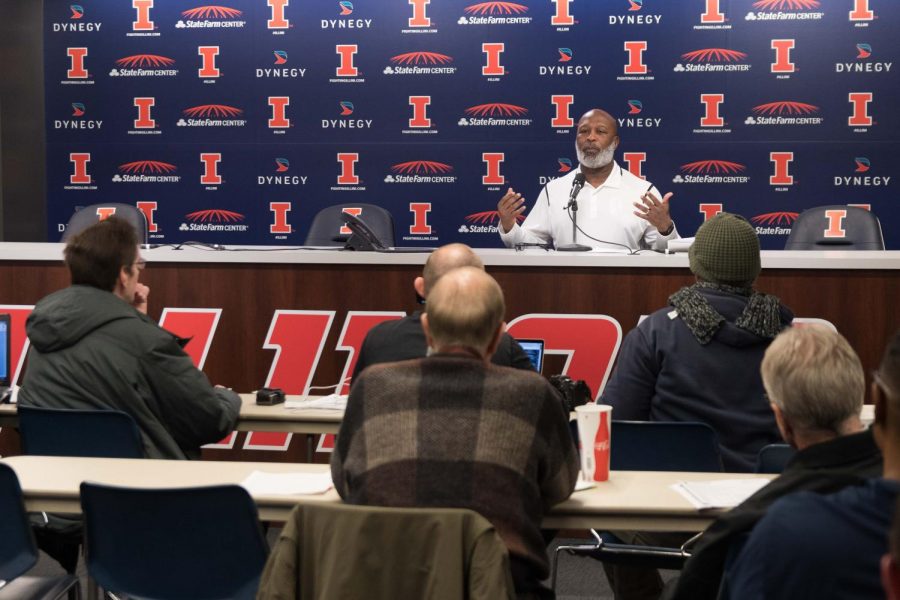 Football head coach Lovie Smith speaks at a press conference for National Signing Day on Wednesday afternoon. There were five players who signed on Wednesday and there is one more scholarship available. Smith said he has a player in mind for the scholarship, but he would not discuss his position.

The 6-foot-3, 195-pound Taylor put up some impressive numbers in high school.

Taylor accounted for 2,594 all-purpose yards and 32 touchdowns during his senior season.

Head coach Lovie Smith said at his National Signing Day press conference Wednesday that his ideal quarterback will have to throw with high accuracy and use his legs to escape the pocket.

“We’d like a more mobile quarterback at the position, and I feel like we got that with Coran,” Smith said. “If you look at all of the players we are bringing in, I think you can say that they’re all mobile, including Cam Thomas.”

Recently hired offensive coordinator Rod Smith agreed he understands that spring ball, which will begin March 5 or 6, will be competitive at the position.

Quarterbacks Chayce Crouch and Jeff George Jr. both announced this offseason they will not return to the program next season.

Taylor, MJ Rivers and Matthew Robinson, who all committed Wednesday, will be vying for the 2018 starting role, along with last season’s starting quarterback Cam Thomas.

Rod Smith said he does not want his players shying away from the competition or feeling comfortable thinking they have the starting job.

Rod Smith believes the same about the running back position. He was the main recruiter for Kenyon Sims, who signed Wednesday.

The Illinois coaching staff also emphasized out-of-state recruiting with this class. It consisted of 10 players from Florida, four from Texas and four from California.

“The guys we are recruiting, and as it continues on with the 19s and 20s, I see that there is opportunity,” said defensive coordinator Hardy Nickerson. “We feel that they can come in and play right away and make a difference. That sends a strong message to those guys out there.”

Early signees Verdis Brown and Calvin Avery were both on the Under Armour All-America Game rosters last month. The two headline some talented additions to the offensive and defensive lines.

Only five players signed Wednesday, meaning one more scholarship is available. Lovie Smith said he has a player in mind, but he would not discuss his position.

He said he does not look at national recruiting rankings but rather trusts that he and his staff have found the right players for the system.

Lovie “We have a great product,” Smith said. “We are building of course on the football field and new facilities, so a lot of good things happening around here to make guys get on board, which they did.”