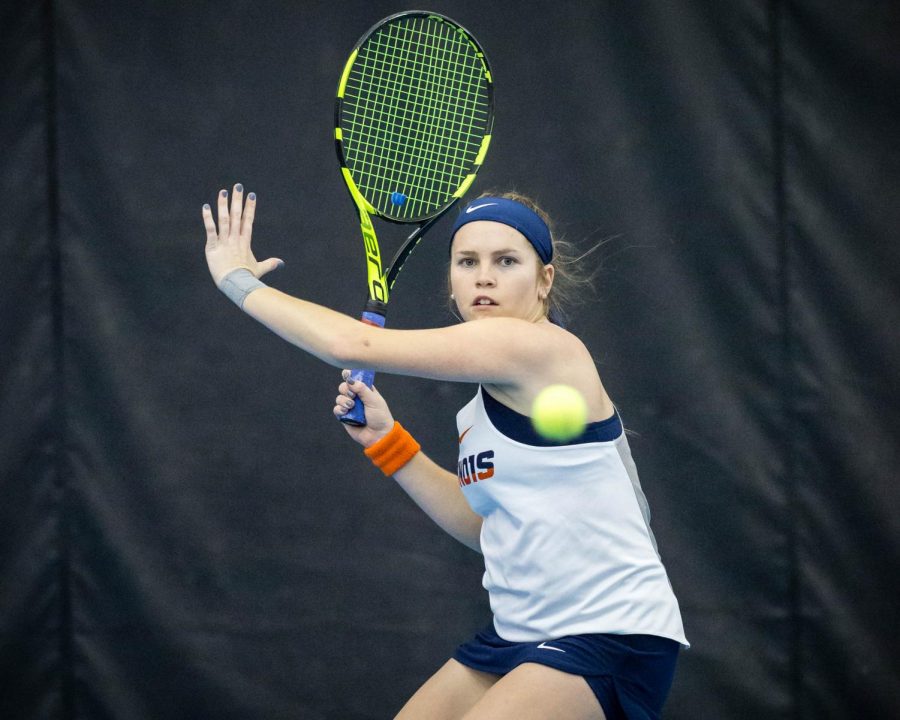 Illinois' Jaclyn Switkes gets ready to return the ball during the match against Texas at Atkins Tennis Center on Friday, Feb. 2, 2018. The Illini won 4-2.

Illinois freshman Asuka Kawai survived a long, three-set match, ripping backhand after backhand during the final rally to defeat Wake Forest’s No. 33 Emma Davis 5-7, 6-3, 6-3 and deliver the No. 5 Illini women’s tennis team a 4-3 win over the No. 10 Demon Deacons.

Kawai, throwing her racket to the side, was immediately engulfed by her jumping, screaming teammates in the middle of the court.

Kawai’s win clinched the Blue Gray National Tennis Classic, and it also means that Illinois, with its 10-1 record, is off to its best start since 1982.

The Illini have won seven-straight matches, and the win over Wake Forest in Montgomery, Alabama, was Illinois’ first top-10 victory since a win over No. 9 Texas in 2012. The team has also racked up wins over three top-25 opponents, already better than any other single-season total in program history.

Daniela Pedraza-Novak pulled the Illini even with a 6-2, 6-2 win over Zalewski in the No. 5 singles spot, but Wake Forest quickly opened a 3-1 lead after Meredith defeated Belaya 6-4, 6-3 and Anna Ulyashchenko bested Duong 6-1, 6-4.

Illinois had to win the next three singles matches to avoid defeat, and it did.

Kawai did the rest.

Head coach Evan Clark was deeply proud of his team’s play and effort during the weekend.

“Being down 3-1 against a very good Wake Forest team and watching Asuka clinch the match was probably one of the proudest moments of my coaching career,” Clark said. “I am so happy to see this team reap the rewards of their hard work.”

Illinois got to the final through wins over Yale and Auburn, who the team faced immediately before taking on Wake Forest.

On Friday against Yale in the opening round, the Illini cruised to a 4-1 win after losing the doubles point, rattling off four consecutive wins in singles.

On Saturday, before taking on Wake Forest, Illinois defeated Auburn in a tight 4-3 contest.

This time, Illinois won the doubles point but dropped the first two matches in singles.

Three different Illini earned match-clinching wins in each of the weekends’ contests, and Saturday’s was the first of Belaya’s career. Switkes, who clinched against Yale, has now won six matches in a row in singles.

Saturday’s singles matches for Illinois were of the nail-biting variety, as six of the seven wins were three-set comebacks.