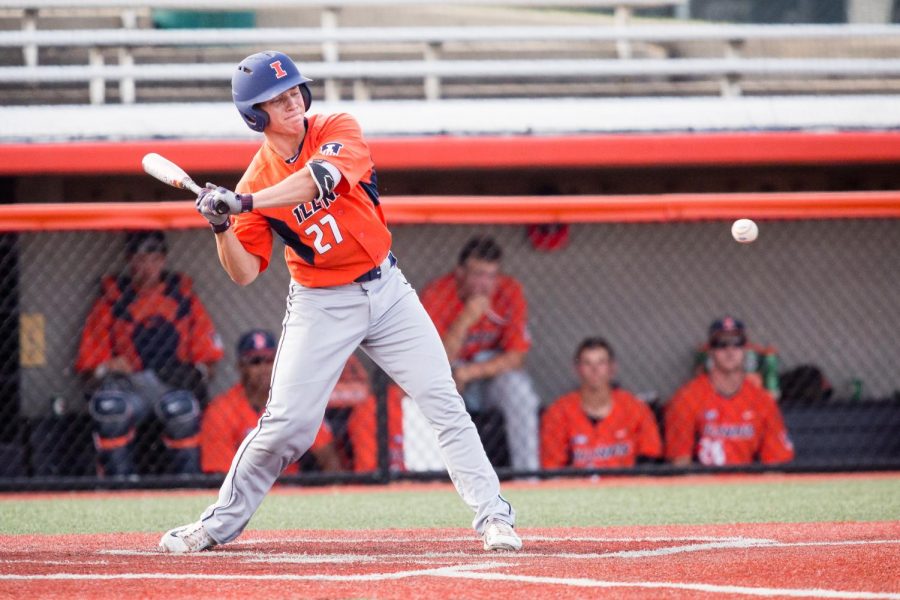 Illinois infielder Grant Van Scoy swings at the pitch during the game against Indiana State at Illinois Field on Sept. 24.

Tied 3-3 by the eighth inning, the UCLA relief pitchers struggled against the Illinois batters.

“I was really pleased with how our guys went about things; they were excited. They want to play good people,” head coach Dan Hartleb said. “The name and the ranking didn’t matter.”

The relievers threw 45 pitches to eight batters in the inning with 5.6 pitches per batter. The Illini walked three times and had two hits, the first from Doran Turchin and then Grant Van Scoy’s go-ahead single up the middle.

All of Illinois’ runs came with the No. 8 and No. 9 spots in the order at the plate.

But it was Van Scoy who launched the game-winning hit in the eighth with a two-run single.

Prior the the eighth, UCLA was in the lead after scoring all of its points in the seventh.

“The game of baseball is the game of failure,” first baseman Bren Spillane said. “You’re not going to be perfect every time, but it’s about how you bounce back.”

Illinois saw its best pitching performance of the season from Quinn Snarskis, going most of six innings without a allowing a run.

Ryan Thompson came in as relief going two innings without a hit, upon entering the game with bases loaded and one out. Closer Joey Gerber worked a 1-2-3 ninth for his second save, as Illinois didn’t allow a single hit on the final eight UCLA batters.

The Illini came back to U.S. Bank Stadium on Saturday for a 4-3 victory over Arizona.

Every Illini in the starting lineup reached base at least once, and the team totaled 11 hits and walked five times. Four of the walks came in the eighth inning where three Arizona relievers combined to throw 46 pitches—12 were fouled off by the Illini.

Neither team took more than a single run lead throughout the duration of the game.

The Wildcats briefly took a 3-2 lead in the sixth before Spillane doubled home Ben Troike in the seventh and drew the bases-loaded walk in the eighth.

Michael Massey, Jack Yalowitz and Spillane had two hits each, and Spillane drove in two runs, while Mark Skonieczny and Massey had one RBI each.

Thompson secured the win by getting six outs in five batters over the seventh and eighth innings.

In Sunday’s game, the last of the weekend, Illinois jumped ahead of Washington quickly for the eventual 7-1 victory.

By the end of the first, the Illini had totaled four runs, with Zac Taylor hitting a double on the opening pitch. Following was an RBI-single from Massey and Jeff Korte’s two-RBI double.

Illinois remained up throughout the duration of the game.

“We pitched extremely well. All three starters—Snarskis, Fisher and Weber—did a great job,” Hartleb said. “They got us deep in the game.”

Weber allowed one run, scattered eight hits, struck out one and walked just one batter, throwing 59 strikes on 89 pitches.

“I think we are getting to the point now where people are going to need to shoot for us (because) we’re confident and were a good team, ” Hartleb said.