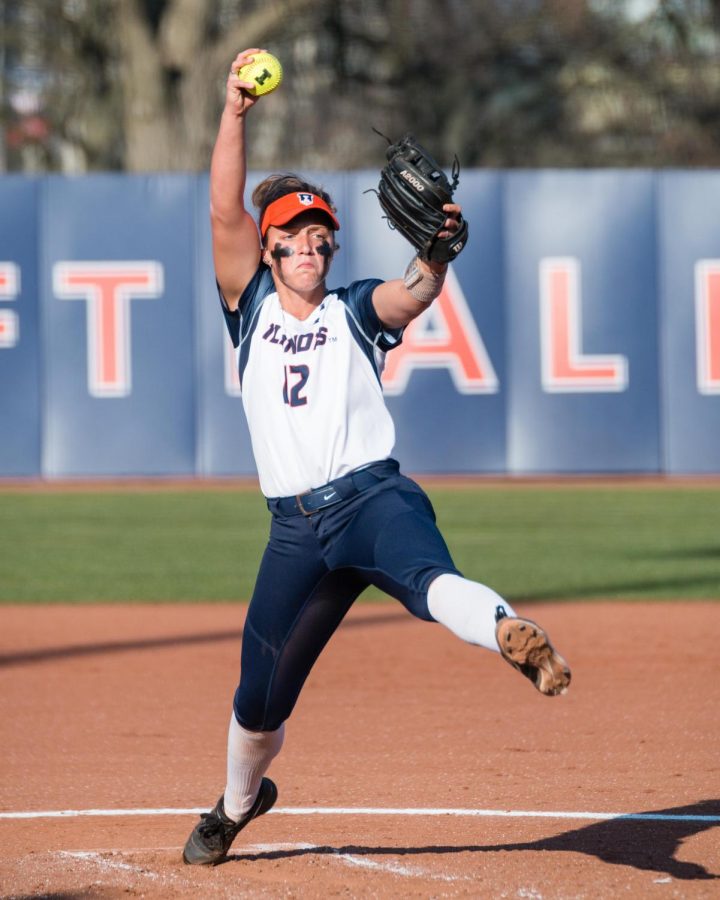 Illinois’ Taylor Edwards delivers the pitch during the game against SIUE at Eichelberger Field on April 12, 2017. The Ilini lost to the Minnesota Gophers 6-0.

Illinois softball had a tough start to its weekend in Minnesota, as the Golden Gophers swept the Illini in a doubleheader Friday afternoon. A pair of 6-0 losses dropped the Illini to 3-4-0 in-conference on the season.

The Illini couldn’t catch up to the heat of Gopher pitcher Amber Fisher, who shut them out for 13 combined innings. According to head coach Tyra Perry, the team had a difficult time with offensive execution.

“I don’t think we made adjustments at the plate,” Perry said. “I do think we had a tough zone to work with, but we’ve had that before. We kind of let that get us out of our offense and attack plan.”

During game one, Fisher pitched a no-hitter, keeping Illinois off the board. Minnesota’s Kendyl Lindaman contributed offensively for the Gophers, hitting a three-run homer. Senior Danielle Parlich also had two RBIs, while junior Maddie Houlihan added a solo home run.

Illinois junior Emily Oestreich collected the loss after pitching three innings. She allowed five earned runs and struck out one batter. Senior Erin Walker allowed one earned run and struck out two batters after taking over in the fourth.

The second game of the day saw a similar trend for Illinois. Minnesota collected six hits, including a three-run homer by senior Dani Wagner. Sophomore Carlie Brandt, Houlihan and Parlich drove in one run apiece for the Gophers as well.

The Illini sit at ninth in the Big Ten, but they top the stats in individual areas, as well as owning the highest team batting average in the conference at .323.

Junior Kiana Sherlund leads the conference in overall hits, tallying 51 on the season so far, and junior Carly Thomas is first in doubles.