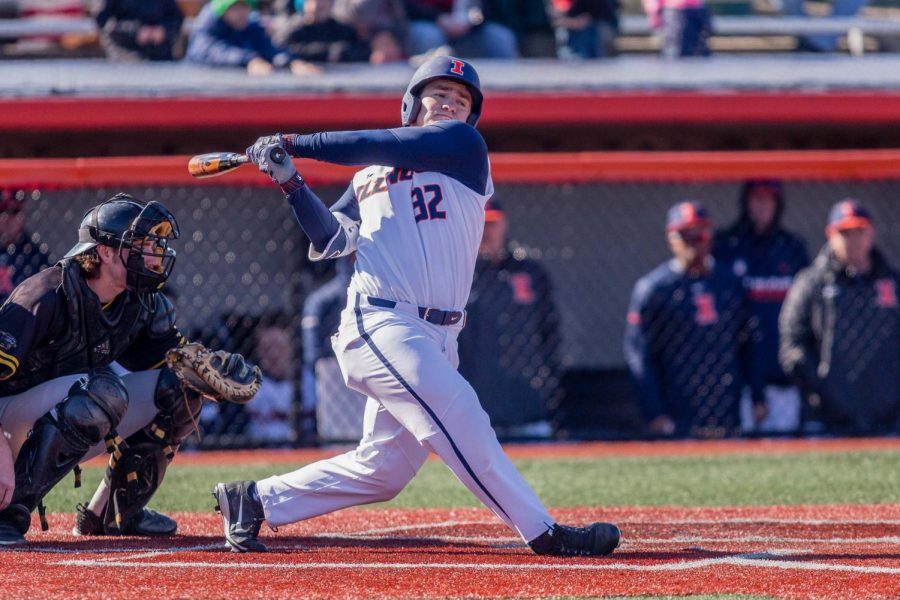 Illinois catcher Jeff Korte (32) swings and misses during the game against Milwaukee at the Illinois Field on Wednesday, March 14, 2018.

After the 2017 season, when the Illinois baseball team went 23-28, head coach Dan Hartleb knew he needed to make improvements at a number of positions.

Perhaps one of the biggest questions facing his team as it entered this season was surrounding the catcher role.

More than halfway through the year, it is evident Hartleb has found his man in Eastern Florida State College transfer Jeff Korte.

A product of a strong program and competitive Floridian community college baseball landscape, Korte committed to Illinois with the idea of winning the starting job firmly in his head.

“I thought we needed to upgrade our catching position,” Hartleb said. “I wasn’t pleased with the performances we had last year, so we wanted to create some competition back there and we did that.”

Korte initially had his sights set on transferring to a Division I program in Florida, but each program he had been in contact with already had depth at the position or a clear starter.

However, the Illini showed interest in the Melbourne, Florida, native. The program got in contact with Korte and went to watch him play summer ball, while later flying him out to Champaign for a visit.

The 5-foot-8 junior has had a relatively smooth adjustment to his new team and life setting, coming into the team and winning the starting job. Korte has started 30 of the team’s 32 contests so far.

Though Korte’s mainly known for calling pitches and having a steady glove behind the plate, in recent weeks he has brought a new tool to the Illini — his bat.

Against Rutgers last weekend, Korte had a three-hit, four-RBI showing in a tight game the Illini won 13-12. It was Korte who knocked a key two-out RBI single into right field to break a 12-12 tie in the bottom of the eighth inning. Later, in the series conclusion, Korte had two-RBIs on a one-run day that helped boost Illini to a 10-4 win and secure the sweep of the Scarlet Knights.

Korte is relieved to finally be seeing some success while at the plate instead of behind it. He thinks the adjustment to Division I pitching has not been nearly as dramatic as he made it seem.

“Junior college in Florida isn’t really too much of a change, even though the stats would lie,” said Korte.
“I feel like this year, I’ve been getting myself out more than the pitchers have. To be honest, here, the pitching is about the same as it would be. Last year I faced probably four or five guys that got picked in the MLB draft.”

Hartleb, in his 13th year at the University, expressed how the team believes pitches actually try and communicate with people.

“He came in as a good player and he’s worked very hard,” Hartleb said. “He does a really good job of receiving and making some marginal pitches look like strikes. I think he has the respect of our pitching staff and he’s done a good job offensively, just been a complete player for us.”

Korte came to Illinois with a chip on his shoulder, especially after getting passed over by a good amount of other programs. And while Korte’s individual performance may be improving, the catcher is still locked in on how his team is performing and the upcoming competition, who he feels the Illini have outperformed.

“I was looking at the polls this morning and some of the teams they have in front of us, we have the same record or maybe our record was a little bit better,” Korte said. “We probably played better teams than them, but they just gave them the spot because they’re the bigger powerhouses.”