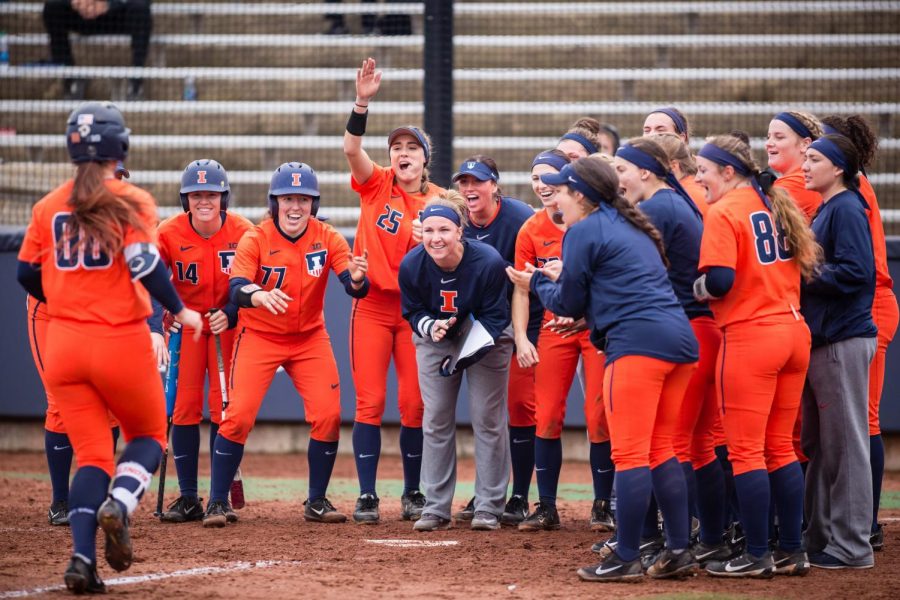 The Illini softball team celebrates at home plate after outfielder Veronica Ruelius (00) hit a home run during the game against Northwestern at Eichelberger Field on Wednesday, Mar. 28, 2018.

Not much has been consistent for the Illinois softball team so far this year — not even the weather.

Perry believes the lack of consistently good weather has caused a rift in Illinois’ game schedule. The team’s last three-game series at Wisconsin turned into a doubleheader due to the weekend weather forecast, with a series finale the next day that was canceled.

Perry noted the team’s practices have also been disrupted.  The team has struggled to get into a rhythm with recent practices having to be held indoors, and Perry said it has been challenging to prepare without a dirt field and the appropriate outfield length.

That being said, Perry still looks at the bright side.

“I think the situation has made us tougher and stronger because we have had to go through some challenges that some teams don’t have to,” Perry said. “And our players take it in stride.”

One thing that won’t change next week is the location of the Illini’s games. Wednesday marks the start of a seven-game home stretch for Illinois, where the team will face a number of opponents.

A weekend series with Iowa is sandwiched between four non-conference matchups, a doubleheader against Wisconsin-Green Bay and two single-game outings against IUPUI and Eastern Illinois.

Perry said it isn’t ideal, but the non-conference games have a purpose.

“We use them as a chance to get our bats going again, or maybe pitch a pitcher that we want to try and get going,” Perry said.

The Illini are 19-6 out-of-conference and 14-3 against teams in minor conferences, but for the players, it is no different than a Big Ten game.

“We go in with the same mindset every game,” said first baseman Kate Giddens. “We want to be the best team out there.”

More often than not, that has been the case for Illinois, which is now 6-1 at home and hasn’t lost to a non-conference opponent at Eichelberger Field this season.

After dropping both games of a doubleheader to Minnesota on March 30, Illinois responded with maybe its best performance of the year, putting up 38 runs in three games, followed by another pair of road losses.

As the Illini enter the homestand, Perry thinks the team is close to finding a consistent level of play, which will be key for them with the postseason looming.