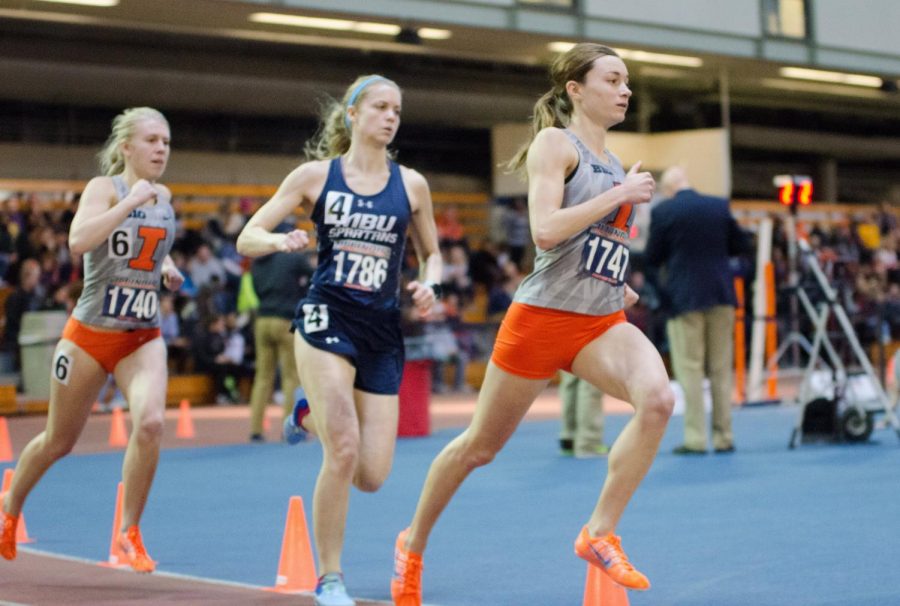 With commencement ceremonies and the Big Ten Championships just about a week away, the seniors on the Illini track and field team are entering their final weeks at Illinois.

For some of the 18 graduating seniors, their career paths incorporate skills that were developed on the track team.

For David Kendziera, that statement is quite literal. Kendziera will finish his career with the Illini as one of their most decorated athletes in recent memory, a reputation that may precede him as he makes his transition into the pros. On the season, he is still undefeated in 110-meter hurdles, including a first-place finish over Olympian and world record holder Aeries Merritt at the Mt. SAC Relays. He is also the reigning Big Ten Champion in the 400-meter hurdles.

The All-American hurdler plans to continue his athletic career professionally after graduating. Throughout the process, Kendziera has planned to train with the team as an assistant.

Also planning on using her track experiences to guide her career path is distance runner Miranda Marry, who is going into physical therapy after it saved her track career. As a junior in high school, Marry’s track season was hampered by injury until she started physical therapy with Rebecca Heffernan, the wife of wrestling head coach Jim Heffernan.

“She pretty much saved my junior year, which led to me being recruited here,” Marry said. “I really fell in love with how you could fix someone, in turn helping them get better and achieve their goals.”

For Marry, track and physical therapy go hand in hand. She studies exercise, muscles, proper recovery and injury prevention. What she’s learned from her major translates into how she trains,  which leaves her hopeful to stay fit for the rest of her life.

Team member Nicole Choquette, currently a grad student at the University, is working toward finishing her degree and pursuing a career in earth, society and environmental sustainability. She began as a walk-on and slowly developed into a veteran contributor for the team, winning the 2015 Big Ten Championship for the 600-meter indoor, runner-up in the 800-meter indoors the following year and finishing third in the 800-meter this year. She also won the 2018 Big Ten Medal of Honor award at this year’s Oskee Awards.

Middle-distance runner Tony Zea’s career path was also heavily influenced by his running at Illinois. During his freshman year, he asked the upperclassmen accounting majors for advice about career fairs and professional networking. He plans to use the advice as he begins his professional accounting career at Grant Thorton-LLP — the sixth largest accounting firm in the U.S.

“I worked there last summer as an intern. Considering that it’s the sixth largest firm in the country, I was naturally drawn to the opportunity,” Zea said. “I fell in love with the environment and I thought it had a good company culture, so I thought it’d be a good place to jumpstart my career.”

A pair of Illini are pursuing their laws degrees. Distance runner Denise Branch is set to start her first year in law school this fall. She’s applied to grad programs at 14 different universities. Among them are Fordham, Georgetown, Emery, St. John’s and Illinois. She hasn’t decided where she’ll be attending and is still waiting for three remaining schools to respond to her application.

Distance runner Luke Brahm is already a graduate student at the University, currently in his second year of law school. When he finishes his degree, he hopes to either work at a law firm or use his legal education for a non-profit in order to start a career in legal education.

“I decided to go into law during my junior year of undergrad. Knowing I would have two years of eligibility after finishing undergrad, I decided I also wanted to use those two years I still had,” Brahm said. “I started looking at my options as I became a grad student after I realized I didn’t want to become a lawyer. I thought that law school would be the best use of my time and athletic eligibility, while also receiving a valuable degree and quality education at the same time.”