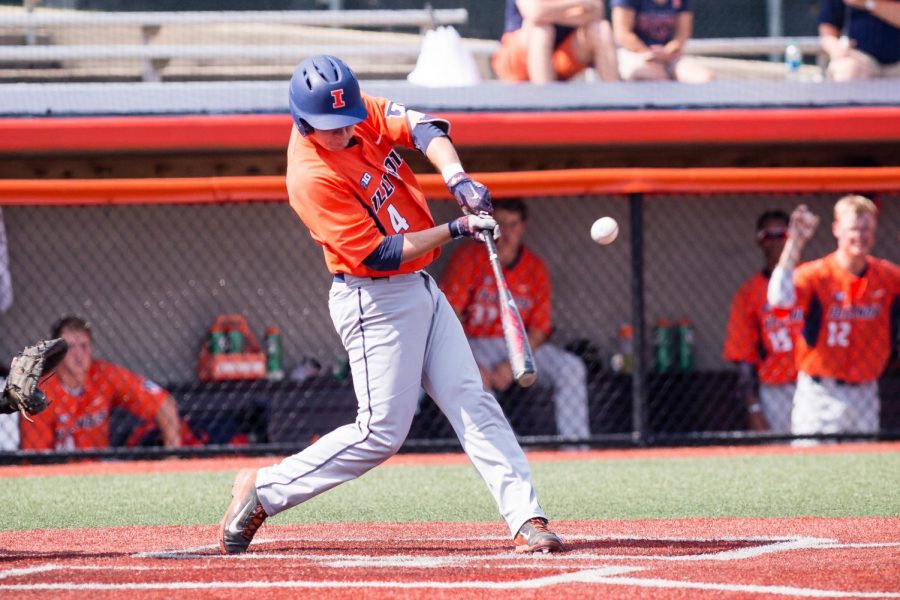 As the smell of the annual Bleacher Bum Barbecue wafted into the stadium, Illinois baseball took to the field for the first night of the Ohio State weekend series.

After a pivotal third inning from the Buckeyes, the Illini were not able to come back in Friday’s game in a 6-5 loss.

Illinois packed the stands over the weekend for the biggest crowd since 2015, when the Illini hosted the NCAA regionals. Fans enjoyed a large number of festivities, from the fireworks during the national anthem to the bouncy house for the kids, and for the first time in the history of Illinois field, alcohol was being sold.

Those in attendance saw a competitive game in the opening innings. Trading runs in first, the teams remained tied 1-1 until the top of the third.

Through a series of miscalculations by the Illini outfield and an error from pitcher Andy Fisher, Ohio State jumped to a 6-1 lead, one that proved to be too much for the Illini to overcome.

“I thought we played well except for the third inning,” head coach Dan Hartleb said. “We had an opportunity when they had the first two runners on to just get an out by throwing strikes on a bunt situation, but we didn’t. They got another hit and it snowballed into five runs.”

The Illini were unable to respond until the bottom of the fourth, with a single run by Doran Turchin. The junior hit a double to left field and was eventually brought home by Zac Taylor’s hit to right field.

In the fifth, the Illini finally found their groove.

“It was kind of dead going into that inning, and Casey Fletcher came up to me and said, ‘we need to get the crowd going,’” Michael Massey said. “We’ve got to use this crowd to our advantage.”

After hitting a triple down the right-field line, Massey landed on third with a scream of excitement.

Ben Troike then took to the plate and hit the first homer of the night. Spillane circled the bases after being walked to first, followed by Massey’s triple.

Illinois finished the inning just one run down, 6-5.

“I think we did really good offensively,” Hartleb said. “We swung the bats much better tonight, hit a lot of balls hard; we just hit the ball right at defenders.”

As the game came to a close in the ninth, tensions were high. After an attempted steal by Ohio State, the umpire’s original ruling of safe was switched to an out when Hartleb took to the field to argue the call. Although, it didn’t turn out in the Illini’s favor, as the team was not able to land another run.

On Saturday, the tides turned, and the Illini captured an 11-3 win over the Buckeyes.

Illinois scored in five straight innings from the fourth through the eighth. Turchin led the Illini with three hits, three runs and two RBIs.

Troike hit his second homer of the series and extended his reached base streak to 47 games. He hit homers in consecutive games for the first time in his career.

Bren Spillane also hit a home run. The line drive launch to right field was his 17th of the season. The first baseman now has sole possession of fifth place on Illinois’ single-season home run list and has hit more homers than any Illini outside of the 1990’s.

Quinn Snarskis settled in to throw seven innings while allowing three runs on six hits. He only struck out one batter but pitched to soft contact after Ohio State took a 3-0 lead in the second inning.

The Illini will wrap up the series against the Buckeyes on Sunday afternoon.