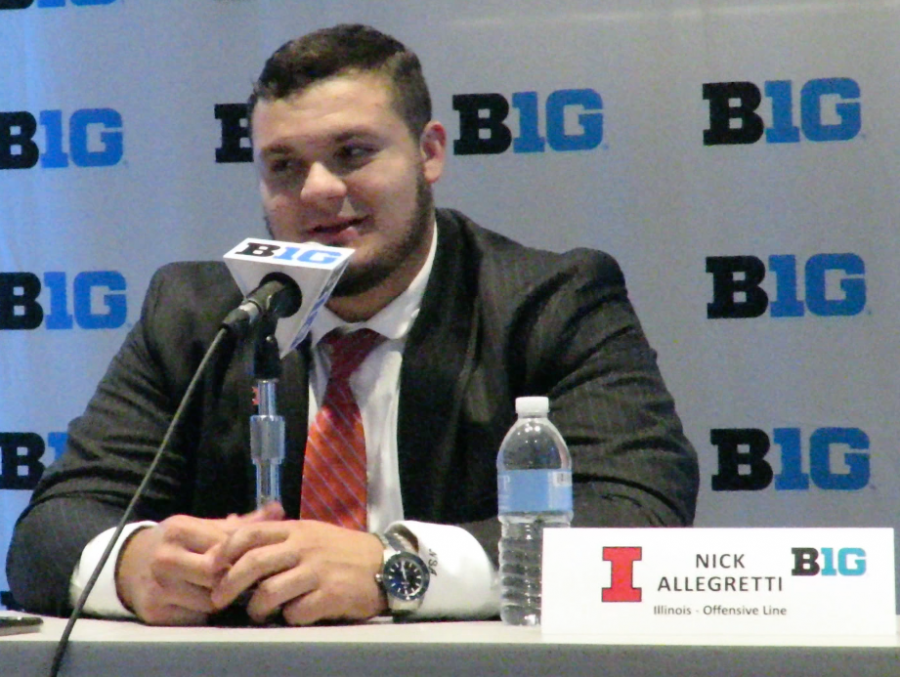 Illinois offensive lineman Nick Allegretti addresses media at Big Ten Media Days on July 26 in Chicago. Allegretti looks to set an example for his teammates as a leader and continue to give back to his community.

By 5:45 p.m. Tuesday at Big Ten Media Days in Chicago, a once-bustling crowd of Big Ten coaches, players and media had steadily dissipated into a scattered group of straggling reporters and rather tired-looking players and coaches.

Meanwhile, Illinois offensive lineman Nick Allegretti casually weaved tales about his experiences playing at other schools’ stadiums to a small cluster of media.

“The fans are right there and you’re thinking, ‘Oh, you’re gonna get the heckles; whatever I’ll take it,’” Allegretti said. “And you run by them and they’re like, ‘Great first half! Good game! Keep playing hard!’ I’m like, ‘What? What do you mean?’ I realized after a while that, in Nebraska, you have Nebraska football. That’s it. They don’t want to see bad games, they want to see good football, so they genuinely were happy with us playing well.”

Two years into Lovie Smith’s tenure, the senior has seen more than his fair share of “bad” games. His team is 5-19 under Smith and has been picked by most pundits to finish last in the Big Ten West.

Last season, Allegretti was a key piece of an Illini squad that started a program record 16 true freshmen (the previous high was nine in 2008) and struggled to compete in nearly every area on the field.

With only nine seniors on the roster in 2017 and only eight listed currently, the program lost little in the way of production and returned a corp of players that now know what Big Ten football is like.

But that doesn’t mean the Illini didn’t lose leadership — vocal leader Chayce Crouch retired from football following the season, just one of 15 players who left the program.

Allegretti and Crouch — along with senior receiver Mike Dudek — were roommates. It was tough for Allegretti, who started every game, to see one of his best friends go from the lead role at quarterback to the bench.

Headed into the 2018 season, Allegretti has been ordained as an undisputed leader, not only on the offensive line but for the entire team.

Head coach Lovie Smith leveled high praise on the Frankfort, Illinois-native Tuesday evening, saying he would be key to the offensive line coming together to form a more competent unit. Allegretti looks to improve a raw, inexperienced group that was 125th in the Division I Football Bowl Subdivision in sacks allowed and 118th in tackles for loss allowed in 2017.

“Whenever you’re in that role, you have to do everything the right way,” Smith said. “Nick will play this year as a graduate of the University of Illinois. Everything I want a player to be, that’s exactly who he is.”

Allegretti is more than okay with the increased load of responsibility, though it will force him to jump out of his comfort zone. He’s relishing his chance to make a difference in the careers of some of the younger players on the team.

“People are watching at all times,” Allegretti said. “If you do something that you shouldn’t do, someone is going to justify their mistake by saying, ‘Oh, he did it.’ It’s hard, but I love it. Love being able to have an impact on young kids, like (former Illinois linemen) Teddy Karras, Mike Heitz and Alex Hill had on me.”

And he should know —  Milan takes him on every single practice from the opposite side of the line of scrimmage. Milan said he’s learned a lot from his offensive counterpart himself, especially when it comes to smaller things like being early or on time, technical aspects of the game and “how to be a better man.”

“He’s a hands-on guy; he loves to meet new people and he loves to interact with people,” Milan said. “He’s one of those guys you have no doubt in. He’s a guy you can go to at any moment, if you’re in trouble or need help, even if you’re just fine and want to go hang out with him.”

During the late afternoon pressers, a reporter asked Allegretti’s longtime roommate, Dudek, about the turning point in his extensive recovery from multiple knee injuries. It wasn’t a physical feat of recovery, like being able to cut full speed or take contact; rather, it was when Allegretti and Crouch brought him vanilla Long John doughnuts one day.

The pair was deeply concerned about their friend and wanted to pick him up any way they could.

“He was on top of the world, freshman All-American, (then) got knocked down,” Allegretti said. “Built himself back up, got knocked down. After that second one, he would kind of hang out by himself, he wouldn’t come out much. It was tough to see an outgoing kid (like Dudek) beaten down. We were just like, ‘I don’t know, he likes doughnuts.’ We were doing anything to put a smile on that kid’s face.”

With Dudek back at full strength and the doughnuts eaten, Allegretti continues to demonstrate empathy for those who need it.

For the second year in a row, he took the lead on Illinois’ Life for Life event, a series of strongman events the team does annually in July to raise money for people with rare diseases. Last season, the event brought in a record $39,000, and this month’s event totaled over $32,000.

Allegretti spoke of his sense of duty to the Champaign-Urbana community like it’s simply a part of his role as a leader in the program.

“We have the ability to do so much,” Allegretti said. “As a Big Ten football player, people are going to watch, people are going to listen to you. I watched my family and I watched past teammates like (former center) Joe Spencer and said, ‘I can help people. I can help change people’s lives by simply giving up some of my time.’ So there’s no reason for me not to do it.”

Milan is inspired by his teammate. He believes Allegretti is the epitome of what this squad and program needs in a leader.

Plus, getting out as a team and working in the community helps the Illini in more ways than one.

In addition to building better relationships for the program (and athletic department) in the local community, it gives players who don’t normally spend time together a little more time to get to know each other and begin to form relationships, something each of Illinois’ veterans knows is invaluable.

“To be able to see and witness what he has done for the community and done for Champaign is mind-boggling,” Milan said. “He does the same for the team. He sacrifices himself a ton to help other players on the team. To know that he can do it on the team and out in the community, he’s just a great man.”

Forging closer relationships within the team could potentially benefit Illinois, especially after last season when there were rumblings about veteran, Beckman-recruited players being unhappy with the state of the team.

It was evident for many of Allegretti’s teammates that there was no future at Illinois. A mass exodus of sorts occurred with players like linebacker Tré Watson and receiver Dominic Thieman announcing their transfers at the end of the season.

Allegretti could have left; most of his peers did. But he didn’t.

If the Illini can compete at a higher level in 2018 and win four or more games, it’d be a welcome boost to a fan base starved for any sort of success on the gridiron.

Smith wants Allegretti’s final year in Champaign to be his best year yet. He may need Allegretti to have that type of year, too, if the offensive line is to remain effective against powerful Big Ten defensive linemen.

“Especially Nick, this is it for him; we want him to go out the right way,” Smith said. “He’s prepared to have the best year of his career and we’ll need him to do that, leading the offensive line.”

As for the legacy Allegretti leaves behind in the program, he hopes he is an inspiration to people living tough lives.

“I just want to be able to look back and see a better product than (when) I left,” Allegretti said. “I want to leave them with the best culture possible, the best work ethic possible.”