Illini football training camp: What you need to know early on 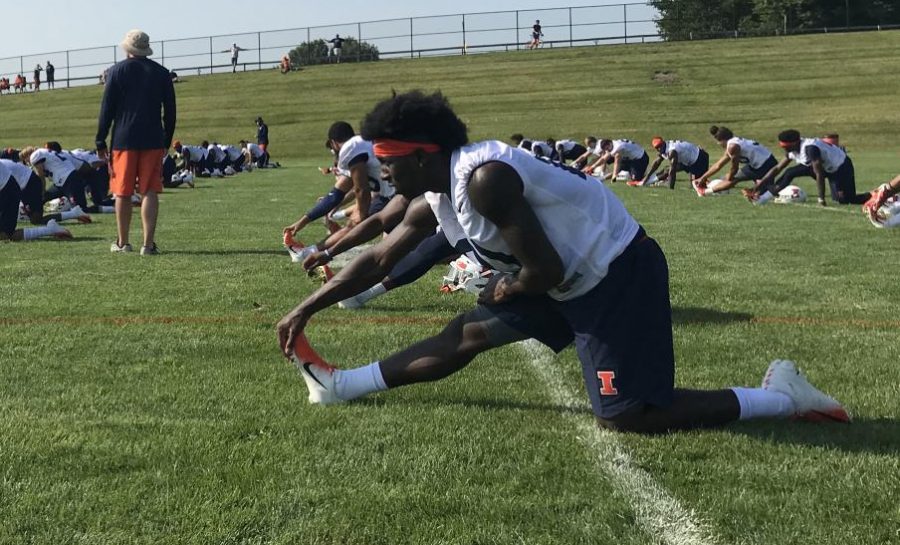 Freshman defensive back Jartavius Martin stretches with his teammates before the second day of practice at the Illinois football training camp at the Campus Recreation fields on Saturday. The Illini are looking to improve both offensively and defensively in the upcoming season, with players working hard and striving to prove their place on the team.

The horse that stood south of the Campus Recreation fields was the same color as the football flying through the air. Wagging its tail, the animal watched along with what could be estimated as a couple hundred fans as the Illini kicked off day two of their training camp.

It was 9 a.m. and new offensive coordinator Rod Smith’s voice could be heard yelling in the direction of his quarterbacks. A set of five at the position, that’s four more on scholarship than the team had at their spring practices.

Head coach Lovie Smith, in full beard, hopped from position-to-position Friday and Saturday, making sure to get a glimpse at a roster that welcomed in 26 newcomers. During the early days of training camp, it’s all about the little things.

“I have talked about some of the young talents we have,” Lovie said. “But it’s day one; it’s about stances and playing hard and showing them how we do things.”

Lovie is heading toward his third season at the helm of the Illini, a year that improvement over a 2-10 previous season is expected.

Well, improvement all starts with training camps and the first two days brought plenty to look at.

Lovie is in unfamiliar territory. The Illini have a total of seven quarterbacks on their team, five of which are on scholarship.

In the pursuit of playing time, Rod and Lovie both welcome in a quarterback battle that pits one grad-transfer against four underclassmen.

“We look more like a football team, just off the book,” Smith said. “Spring ball, last time we talked, we had one scholarship quarterback on campus; we have five now. We have legitimate competition at so many positions, that should only make us better.”

After two days on the field, grad-transfer AJ Bush and sophomore Cam Thomas have lined up for a bulk of the Illini snaps. Freshmen Matt Robinson and M.J. Rivers II are then receiving their fair share behind. For Peoria High School standout Coran Taylor, he has seen the least takes out of the group.

Thomas is the only scholarship quarterback who returns for the Illini after last season. He saw playing time in four games, starting two. Known more for his speed, Thomas has looked to improve his arm during the offseason and has already made sure to air it out several times during training camp.

Bush has also let the ball fly during his time on the field, throwing long balls to wide receivers Justice Williams, Mike Dudek and Ricky Smalling. Bush has taken full advantage of his reps, already pushing toward taking the most with the first string team.

“AJ, it’s some good stuff for his first time,” Rod said. “You can tell he is a veteran-type kid. He has a skill set, but also his mindset. I was thoroughly impressed with his approach to the game and how he handles himself, how football is super important to him.”

Bush has already gained the trust of his players as well, building connections with his receivers and bringing plenty of energy onto the field. Whether he finishes a play or is going to grab a drink, Bush does so with his hands in the air and plenty of shouting.

“(AJ is) big, strong; he can throw the ball, but we think he has a lot of good leadership skills, too,” Lovie said. “When you have an older player, it’s always good, too, when you have a group of young players.”

Nevertheless, with the battle still early on, all the coaching staff is looking for is a good competition.

“We are just going to let the guys compete,” Lovie said. “I think most players want an opportunity to prove exactly who they are. Early on, we are going to get a look at everyone. Eventually, we are going to have to hone it into a few guys. But what I found is you let guys play and they kind of tell you who should start, who should get reps.”

First look at Rod Smith working with his QBs here at @IlliniFootball training camp. Making sure his passers know they’ll also have to use their feet. #Illini

Smith: “You will run the ball… You will have the program in your hands.” pic.twitter.com/MLNUGBEB1I

Wide receivers and plenty of depth

Illinois relied on starting 16 true freshmen last season, all of which have now gained valuable experience, according to Lovie.

Most offensive positions come into the 2018 season with a lot of options, and training camp has shown that possibly more than expected might exist for the wide receivers.

Sophomore Ricky Smalling is coming off a season where he hauled in 510 receiving yards on 31 receptions — this was during a season where the quarterback position was played by committee. Smalling is looked at as the No. 1 receiver right now, with Mike Dudek falling close behind. Otherwise, senior Sam Mays has been taking the reps at the third spot, but community college transfer Dominic Stampley and former linebacker Justice Williams are making their cases for the third and fourth receiver positions.

Lovie made the call to switch Williams to the offensive side of the ball at the end of last fall. The move has impressed those on offense, with Williams continuing to make acrobatic catches in practice.

For Stampley, the Illini were bringing back a hometown kid. The 5-foot-10 receiver attended Centennial High School in Champaign before heading to Coffeyville Community College in Kansas.

Stampley took passes from both Bush and Thomas, also getting time on the return team. As practice starts-up, he is getting acclimated with the offense, but feels comfortable with those in charge, stating that he buys into what coach Rod is selling on the offense.

Stampley’s impact so far hasn’t gone unnoticed by his teammates.

“The room likes him; people gravitate towards him,” said fellow wide receiver, Dudek. “He is awesome; he pushes me, I push him. I think having each other is only going to make us better.”

On the defensive end, the Illini look to build on the more productive side of the football last season.

In training camp so far, Lovie has made sure to spend his fair share of the time working with the defensive backs, a position where the team has no shortage of players.

Sophomore Bennett Williams has brought the energy as the voice of the defense, coming off an ESPN Freshman All-American season. Other sophomores, Nate Hobbs and Tony Adams, and junior Stanley Green were also productive playmakers last season, and the three are expected to be starters.

Although, the Illini have brought in seven freshman defensive backs that could all see their playing times on the field increase as well.

However, a position the Illini is still without major depth is at linebacker, but with the work senior Del’Shawn Phillips is putting in, defensive coordinator Hardy Nickerson may not need to worry.

During training camp, Phillips has been all over the ball. He has already recorded one interception and batted down several other passes.

Last season, Philips led the team in tackles with 85 and appeared in 11 games, starting 10.

One of the Illini’s biggest household names will look to have his first full season since joining the team as a freshman in 2014.

Wide receiver Mike Dudek has had his named called plenty of times already during the first two days of training camp. Offensive coordinator Rod Smith continues to draw up plays that get Dudek the ball. Both days, the receiver got the ball in the backfield almost as many times as he got thrown in his direction, and that makes Dudek one happy receiver.

“I like it,” Dudek said. “Any way you can get the ball and make a play for your team. It’s fun to be out there, but we have 12 guys in the receiver room that can go out and make plays, so anyone of us gets our number called, we can go out and do it.”

When it comes to his previous injuries, Dudek says it’s night and day in terms of how he is feeling compared to last year.

“This year I’m more body sore, last year I was more knee sore,” Dudek said. “Muscle soreness, I can deal with that, everyone goes through it. Just going to be a lot of straining out here, trying to push my limit and keep progressing every day.”

Like the rest of the team, Dudek embraces the quarterback battle and feels comfortable with where the offense is heading. With AJ Bush getting the bulk of the snaps, Dudek has noticed his leadership ability.

“AJ, I haven’t known him long, but I feel like I have known him forever,” Dudek said. “He is a likable dude, great guy.”

Things to keep in mind

As training camp is still in its early stages, plenty of players will move up and down the depth chart.

The team has already said goodbye to freshman Mitch McNutt, who left the team, and also lost Appalachian State grad-transfer Shaedon Meadors to a serious injury. In addition, freshman offensive lineman Kievan Myers is yet to join the team.

No matter the case, Lovie Smith attention is turned to those on the field and will continue to keep a watchful eye on competition across the team.

“(It’s) year three, a lot of excitement,” Lovie said. “We have a different feel around here. Different feel based on what we’ve been doing, we practice as a team.”