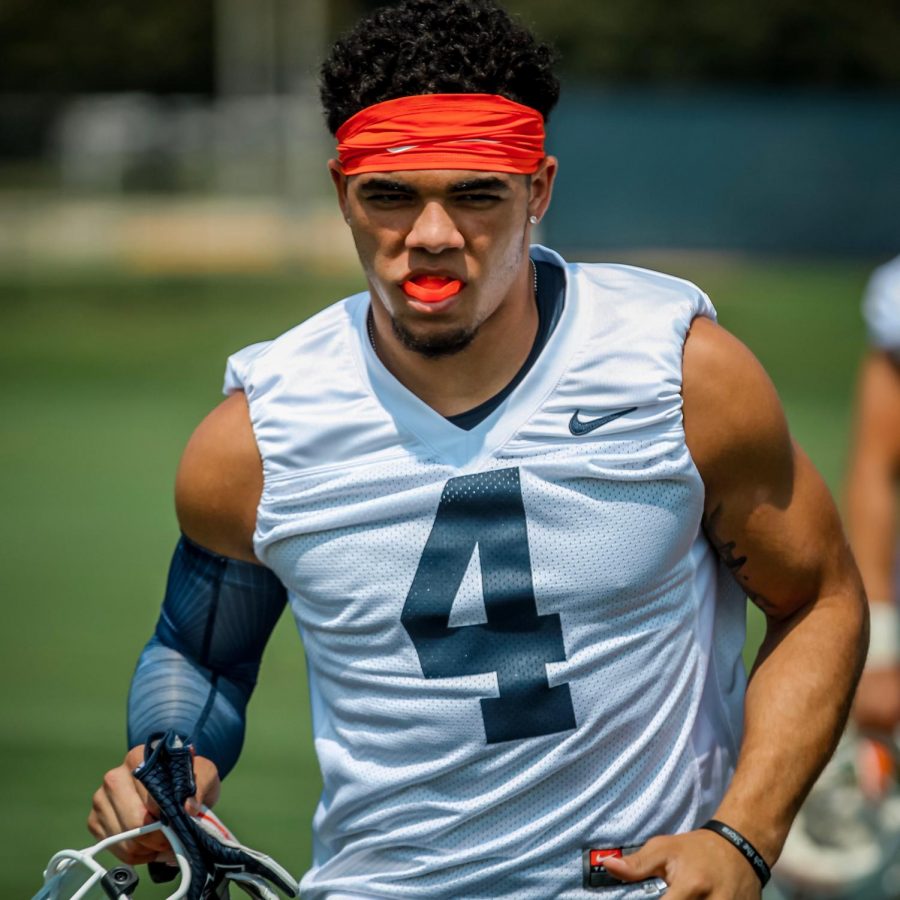 Sophomore defensive back Bennett Williams warms up during Illinois football training camp on Friday. Williams highlights a secondary that heads into the 2018 season with a lot young talent.

On a less-than-stellar day for the quarterbacks, the Illini secondary owned Wednesday’s practice.

It seemed as if virtually every defensive back who got reps made a good read to break up a pass or several. In light of newly added youth and depth, in addition to talented returners Bennett Williams and Stanley Green, the Illinois staff is excited about the safety position.

In 2017, Williams emerged as an athletic playmaker, starting seven games at safety and leading the Illini with three interceptions. He also added 64 tackles (34 solo) and forced a fumble, numbers solid enough to earn him a spot as an ESPN Freshman All-American.

Green, for his part, was a figure of consistency. The All-Big Ten honorable mention started seven games, tied for the team lead in forced fumbles (three) and was second in tackles, with 70 (37 solo). As a junior in camp, Green is now one of the most experienced Illini at the position.

Add the likes of freshmen Sydney Brown and Delano Ware, who have each seen significant first-string reps, the unit is shaping up to be potentially one of the best on the team. In addition, there are sophomores Dawson DeGroot and Kendall Smith, who have each had a number of meaningful reps through five days of camp.

“We’ve added a lot of bodies back there, some good talent, but you need to take it to the field,” said head coach Lovie Smith. “Young players, first it’s about knowing what to do. Then we kind of see their athletic ability. Need to make some plays, ball’s thrown up in the air, we’re about taking the ball away. Our offense is going to do some things this year, but we need to get them as many opportunities as possible.”

As the expected go-to options, neither Williams nor Green looks to be concerned about losing their prospective jobs. Each welcomes competition as something necessary and believes whoever is performing best should be put on the field.

“I feel like we’re competing harder, we have a lot of competition in the room,” Green said. “I feel like everybody is focusing more on the playbook, coming out here and translating it to the field. I feel like, as a group, we’re learning more and getting stronger.”

Jousting by his demeanor on and away from the gridiron, it’s no surprise Williams is not one to shy away from competition. The Campbell, California, native can be heard from all over the field, barking commands and dishing out words of encouragement to his teammates.

He did both of those things on Wednesday, leveling praise on his younger teammates after 11 vs. 11 play ended.

“(Brown and Ware), they’ve got a lot of upsides, a lot of talent,” Williams said. “They’re young; it will take a little bit to learn. But I would not be surprised whatsoever; I expect them to play this year for sure and to get a lot of playing time.”

First-year passing game coordinator/safeties coach Gill Byrd is loving what his unit has shown so far in camp. He noted the serious approaches to the game Brown and Ware each have, something he believes will benefit the freshmen significantly during their careers.

Byrd said Ware is so mature, “he’s like an old man to me.”

“My thing is with all these guys, it’s not that we’re going to make mistakes,” Byrd said. “Everybody makes mistakes. Nobody’s perfect, but the key is that I cut down my margin of error every day. So pretty soon, you look at me and say, ‘Man, that guy is not making mistakes.’ Yes I am, but I’m making fewer mistakes than my opponent; that’s when I win.”

Green described Illinois as “fed up” with the results of recent years.

Now, the Illini and the team’s secondary is eager to seize the opportunity and show marked improvement in 2018. They want opponents to respect them, not think they’re going to walk into Illinois and win by three or more touchdowns week in, week out.

“We’re trying to win,” Green said. “We’ve got to bring our attention here every day, can’t take no days off. We just came off a bad season, so we’ve got to work hard every day.”