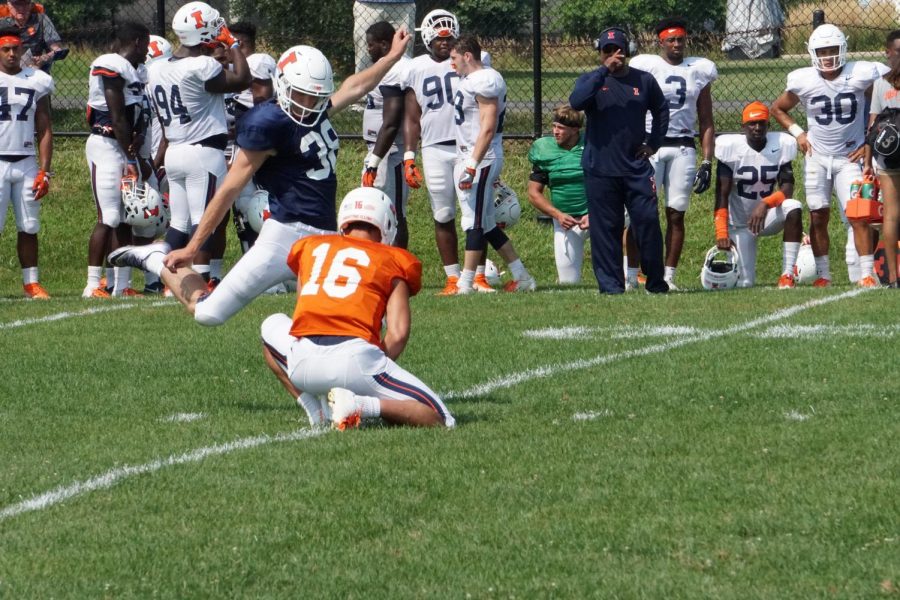 Freshman kicker Caleb Griffin lines up to kick a field goal during training camp on Friday. Griffin joins Julian Pearl as two incoming members of the team who grew up in the community.

Illinois freshmen Julian Pearl and Caleb Griffin may not see playing time in 2018, but each player has had an eye on the Illini from a young age.

Pearl has watched the Illini over the years from nearby Danville, Illinois, and the 6-foot-6 defensive line convert is determined to be a part of the group that takes the program from Big Ten cellar-dwellers to contenders.

For Griffin, Pearl’s high school teammate, the transition to the Illinois program comes after years of balancing the sport with his other passions — soccer, basketball and baseball.

The pair has a lot of adjusting to do before either is ready to make tangible, on-field contributions for Illinois and each is laying groundwork in training camp.

As high school teammates, their path has long been interwoven. Now, each player has noted the presence of the other as an important addition to their early college support system.

Pearl recounted his time as a recruiter for Griffin while at Danville, where he would see him each day in the halls and on the football field.

“We’d see each other literally every day,” Pearl said. “It was the occasional, ‘Just come on to U of I, that’s the place to be. It’s home, you don’t even have to go too far.’ And he would just tell me exactly what was going on with it and then around the time he made the decision — I’m not sure if I was one of the first people — but he let me know before the decision was made (public).”

Unlike most of his peers, Griffin didn’t grow up an Illini fan or prioritize football for that matter. He was interested when Illinois began recruiting him, but had to decide if he was willing to commit fully to that one sport.

It’s been a big transition for the 18-year-old placekicker, whose all-time long is 64 yards.

“The biggest part of it for me was just football, football, football, like all the time,” Griffin said. “I wasn’t used to that, that’s not what I did in high school. Being close to home helped because on Sunday I’d been struggling with the three days of straight football and I went home and talked to my friends. That rejuvenated me and got me ready, I was like, ‘This is what I really want to do.’ I’ve had a great five days this week, I’m just loving every day now.”

When trying to integrate into a new environment like Griffin is, being a specialist can be a hindrance. The kickers and punters spend the vast majority of practice away from the rest of the team, working on their skills that could only be practiced in special game situations.

Opportunities to mingle and build relationships with other players, particularly younger guys, are few. Which is why Griffin was happy to do his thing in front of an audience of players on Friday. He nailed a 53-yarder with ease, something that alit a reaction of surprise from the Illini on the sidelines.

For Griffin, it was a bit of a flex. The move proved his worth and his ability.

“You stand on the sidelines, you hear the offense talking about players,” Griffin said. “Talking about kickers, this and that. After you hit one from deep it’s like, ‘Oh, this guy’s legit.’ The older guys were talking to me, they were like, ‘You made a statement with that kick. You showed you belong here.’”

While Griffin has had several moments like Friday’s, Pearl has charted a more low-key showing in camp. While Griffin’s focus has been on showing what he can do and on adjusting his technique to special teams coordinator Bob Ligashesky’s liking, Pearl has been one of the projects of the strength and fitness staff.

Pearl came in from high school as the No. 41-ranked offensive tackle by 247Sports (and he played some at tight end), but the Illinois staff saw him as a better fit along the defensive line. The 6-foot-6 prospect needed to gain a lot of muscle though, coming in at 250 pounds. Since his arrival, he’s put on some muscle, but now the focus shifts back to the techniques on the field.

He’s got a lot to learn, especially with the switch to the other side of the line of scrimmage.

“Now I’ve gained the weight they wanted me to gain, so now I’ve got to develop my technique and my skill,” Pearl said. “In high school, you really don’t need finesse moves and all that. You really just go at the guy across from you. This is totally different; you have to have a plan going at the next guy and now I’m just working on all of that. It’s kind of weird to me because I’ve never really worked on that.”

Pearl is well-aware 2018 probably isn’t his time to be a major player on this Illini team; he’s in it for the full process. But that doesn’t change what he can see around him in his teammates, the staff and the community.

“I sense the pressure, I sense the urgency for that (the wins) to happen,” Pearl said. “I have no doubt that it will happen.”

Coming into a program like Illinois, which is 5-19 under Smith and did not win a Big Ten game last season, is a point of motivation for Pearl. He wants to be part of that group that can turn the program around and he wants to make the people who have been watching him from nearby Danville proud.

“It makes the hunger for success even more strong,” Pearl said.  “I want to make this city and this school, I want to do as much as I can to put it back where it used to be. A place where people can look to us as the staple. Or just to be proud of us, as a university, as a team. Especially knowing this school is right in my backyard, I take pride in it.”