Rod Smith using running backs in a variety of ways 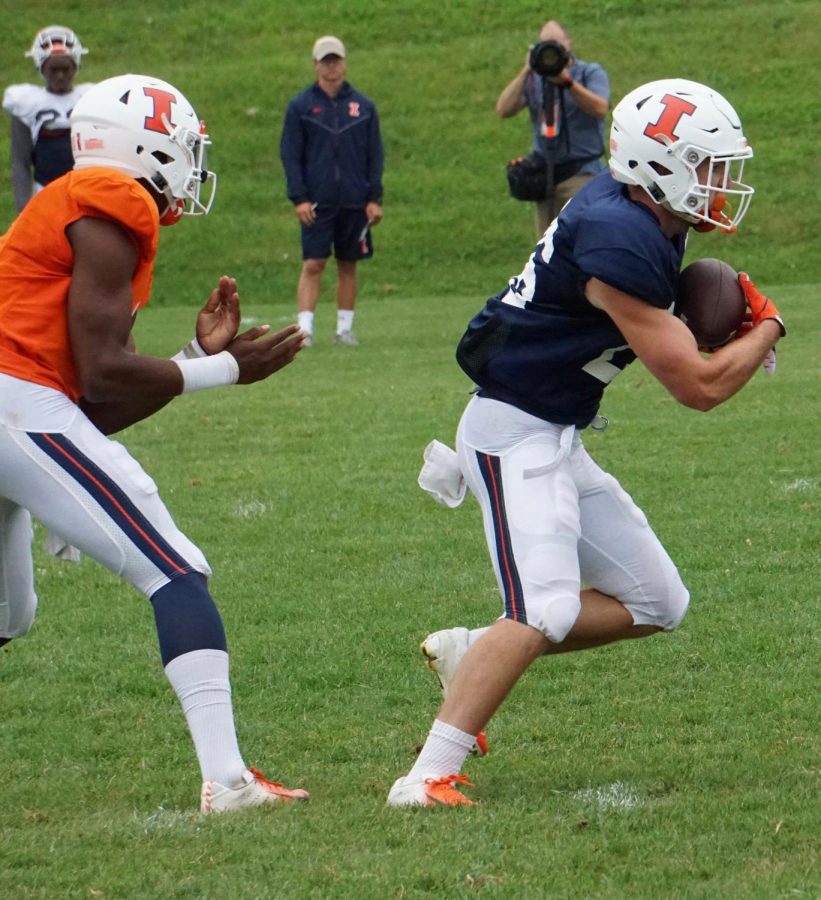 Sophomore running back Mike Epstein grabs the handoff during practice drills at Illinois football training camp on Friday. Offensive Coordinator Rod Smith is looking to utilize the team’s running back depth as the season approaches.

As a result, Illinois is expected to pass the ball more and move quickly, and it remains to be seen what that means for the running game.

Right now, it means the Illini running backs are doing everything. They’re taking handoffs up the middle, outside, working on blocks and even lining up in the slot to catch passes.

The Illini’s most successful 2017 rusher, sophomore Mike Epstein (346 yards, three touchdowns), is thrilled with the diversity of the offense’s demands and what it allows him to do with the ball in his hands.

“It’s something I’d only wish for,” Epstein said. “I feel like it was meant to be. We all have a really good skill set and not only myself, but all the backs here can really catch the ball. It makes things really tough for the defense, even harder than just keying in on the running back.”

Illinois certainly wants to be harder to defend on the ground — the team stumbled to putrid rushing totals in 2017 under Garrick McGee as offensive coordinator, only gaining 1,267 yards all year on the ground (No. 122 in the Division I Football Bowl Subdivision, 105.6 yards per game). The rushing struggles combined with an inability from the quarterbacks to complete passes resulted in an offense that failed to get much going all season, averaging 280.4 yards per game overall (No. 126 in FBS).

Junior running back Dre Brown has seen three offensive coordinators ahead of his fourth season at Illinois and though he was unable to play in 2015 and 2016 due to serious knee injuries, the Dekalb, Illinois, native is impressed with Smith and his plan.

“You have to be an all-around back to play in this offense,” Brown said. “We’ve been learning that we’re trying to get better each and every day.”

Brown described Smith’s approach to coaching as one that is reflective of what needs to be done in life to be successful. You get assigned a job, you get it done.

“(There is) almost like a level of maturity, of professionalism in that you have a job and you’re expected to do it every time,” Brown said. “If you don’t, there are going to be consequences. Which is awesome because that’s life. Later on in life, I’ll have a job. I won’t be playing football anymore; I’ll be asked to do stuff and I’ll have to do it.”

Brown has yet to feature for the Illini for a complete season (he carried 31 times for 138 yards before getting injured in 2017), but Smith has tended to rely on a variety of backs in his offenses. That bodes well for not only Brown but also for freshmen tailbacks Jakari Norwood and Kenyon Sims, who are looking to carve out roles for themselves this season.

Running backs coach Thaddeus Ward has seen things he likes in each one of his guys after a week in camp.

“Ra’Von (Bonner), Reggie (Corbin) and Mike, those guys have been pretty solid throughout camp,” Ward said. “Dre is making a big move, has been really, really good here in training camp. Seeing some good things out of Jakari, continuing to push him this week. And the youngster (Sims), he’s been here for a week, but he’s doing a good job as well.”

As camp progresses though, Ward knows Smith will call more on the veteran members of the unit for reps. As reps become harder to come by and each one begins to count for more as the Sept. 1 season opener against Kent State approaches, Ward wants to see his guys ramp up the intensity and continue to make strides toward improvement.

“You’ve got to be really on point with what you’re doing,” Ward said. “It’s really good for our guys to get in and be able to push the tempo to try and use that for our advantage. Rod does a great job of putting us in position, putting our guys in space, allowing our guys to go out and make plays in space.”

Reggie Corbin and Ra’Von Bonner also provide the Illini with options at the position — Corbin has had some explosive moments in camp but seemed to regress last season under Garrick McGee (78 yards on 18 attempts). Bonner has been used in short yardage situations and around the goal line throughout his time at Illinois, and he could find himself in a similar role this season.

Corbin is optimistic about how his teammates and he are progressing after about a week and a half of camp. For him, it’s not about becoming noticeably better from practice to practice, but rather working hard each day and improving gradually as time passes.

“You have to keep pushing,” Corbin said. “We’re not even focused on our first game right now. We’re taking it day-by-day, and as long as we are better tomorrow than we were today, we’ll be perfectly fine.”

If the Illini can get it right, Epstein is confident the unit will have a much better year than it did while he was a freshman. Illinois can dictate the pace and in doing so, they can dictate the direction of the game, Epstein said.

“It’s a whole new element when you’re playing fast,” Epstein said. “The (other) team’s getting exhausted, you can almost run anything and they won’t be able to do anything about it. If we’re in really good shape and we’re running fast and executing, getting first downs, the defense is going to be in trouble.”