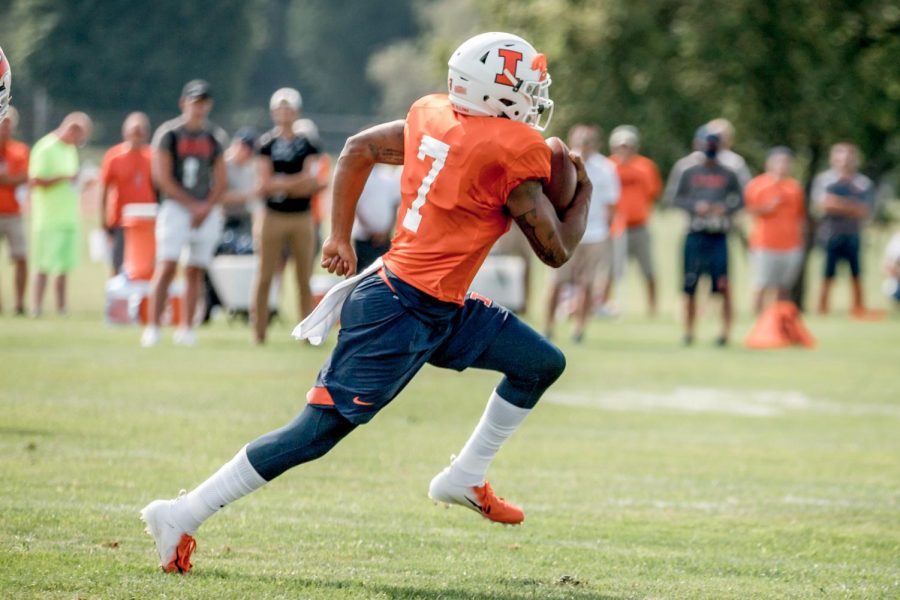 AJ Bush, a graduate transfer who came in from Virginia Tech, will be the starting quarterback this season. Bush won the job over Taylor, returning sophomore Cam Thomas and fellow freshman QBs Matt Robinson and M.J. Rivers.

Back in April 2017, when Taylor verbally committed to the Illini, there was a considerable amount of hype — especially after he led Peoria to a 5A state title the fall before. In his senior year of high school, he put up 1,546 passing yards and 18 touchdowns, while completing 86 of 161 passes. He added another 1,048 rushing yards and 14 touchdowns on the ground.

In his freshman season at Illinois, Taylor might not accumulate any stats. He might not even play at all, but Taylor knows that. For the former No. 20 in-state recruit (247Sports) it’s not about coming in immediately as a freshman and being the guy — he has much to learn.

There are many differences between the high school level, which Taylor excelled at, and the Big Ten level. Instead of being the best athlete on the field, Taylor will be surrounded by large, skilled Big Ten football players — killers by comparison to what he’s seen thus far.

Coming into Rod Smith’s new, high-octane offense at the beginning of training camp, it was evident that Taylor would face a learning curve.

Each rep, he had to deal with the likes of 2017 Illini sacks leader sophomore, Bobby Roundtree (6-foot-5, 255 pounds), hulking 325 pounds, 6-foot-4-inch freshman Verdis Brown, and workhorse junior Tymir Oliver hunting him down. He had to read routes and time his throws right to find guys like Mike Dudek and Ricky Smalling, while making sure not to allow ball-hawking corners like sophomore Nate Hobbs to pick him off.

The results were mixed. However, both Rod Smith and Lovie Smith expressed their satisfaction with each freshman quarterback and their progress. Taylor was no exception.

“Coran Taylor is going to be a really good quarterback in due time,” Rod said during training camp. “He’s just got a little more ways to go. We’ve got time.”

Taylor said he is already forming a solid relationship with his new coach, something that may not come as a surprise. After all, he told Illini Inquirer back in February that in ‘the hour that we had, we worked on more stuff than I ever had with (former Illini offensive coordinator Garrick) McGee.’

He knows that patience is the approach to have in the quarterbacks’ room this season, and the 6-foot-2-inch freshman is relishing the opportunity to learn from Bush. A fifth-year player, Bush can often be seen getting in his teammates’ faces to congratulate them after a good play or having a talk about what went wrong on a misread during practice.

Taylor said he’s been a role model for the other quarterbacks on the roster.

“(Bush) shows that when we’re in and he’s on the sideline,” Taylor said. “He’s cheering us on like, ‘Good read, good ball’. Things like that, just patting us on the back as we go. Being like the big brother of the group, that’s what we look at him as.”

The dynamic here fits right in with Taylor’s approach to this season and his time in general at Illinois — watch, learn, then implement the lessons learned.

He came to Champaign with things to prove. Like many athletes, he wants to earn his degree.

“What drives me is family,” Taylor said. “I want to get a degree for my mom. My sister is getting her degree right now. I have other brothers and sisters that are still working to get theirs.”

On the other side of things, he also wants to show the Peoria community that a player from central Illinois can go on to do big things in life.

“Where I’m from, a lot of people don’t make it out,” Taylor said. “Kendrick (Green) came (here). There were guys before me, but we don’t all come from the same backgrounds. For me to be the blueprint of the people that are behind me, to give them steps and things to do to get to where I’m at, it means a lot to me because it was a big achievement for me as well.”

Taylor can already feel the impact he’s had on people back home. Friends, family and acquaintances tell him all the time about what it means to them to see him doing well.

“I get text messages and stuff every day about people saying they’re proud of me, make sure I keep my head up and keep going in everything that I do,” Taylor said. “I get the motivational speeches and stuff from everybody.”

That swell of pride, along with the constant encouragement raining down from his hometown, brings a weight with it. But for Taylor, most of the weight on his shoulders comes from his own expectations.

“It’s a big pressure because you don’t want to let no one down, not nobody,” Taylor said. “It’s a lot of people that are rooting for me and I feel like if I let them down, I let myself down first before I let them down.”

As Taylor looks to improve each day, he knows his time could be coming. Next season, with Bush gone, a quarterback competition will most certainly be underway again — especially with the addition of five-star recruit Isaiah Williams.

When he made his decision to come to Illinois, Taylor knew there would always be competition. He also knew he wasn’t joining a winning program — the Illini haven’t won a Big Ten game since 2016.

He picked Illinois because it felt like home, just a 90-mile trip from Peoria.

“They welcomed me with open arms like I was their child,” Taylor said. “From the gate, they just brought me in.”

Taylor hopes to help turn around the Illinois program. Like most of the young players brought in, it was a major pitch made by the staff during his recruitment.

He hopes that message will attract more young talent to his new team, though Illinois first has to prioritize on-field improvements this season.

“It’s easier for guys that have been to bowl games, all they’ve got to do is sell their record,” Taylor said. “But here, when you struggle, you can’t sell your record. You’ve got to sell loyalty and being more of a family, so you’ve got to sell that more than the record. At the end of the day, it’s not just football.”

Seeing beyond the immediate, present goal — winning football games — is not something a freshman quarterback normally speaks on in a preseason interview. Taylor, however, has thought about the big picture, and he feels that Illinois was the perfect move to make. It’s the place where he feels that he can build toward his future on more than just football.

“Football is not forever,” Taylor said. “When football is over with, what else do you got? And I feel like this staff here will help you with life after football. I felt like that was a big thing that made me commit. Other people were saying like, ‘football this, football that’, but it’s not always about football at the end of the day.”

Once his playing days come to an end, Taylor is set on giving back to those who excel in the game he has poured countless hours into. Whether that be as a coach, a recruiter or some other role.

But for now, he’ll bide his time as a young quarterback, simply looking to improve in any way he can, taking the advice of Rod Smith and following in the steps of AJ Bush.

“It’s a lot of people proud of me,” Taylor said. “I’m proud of myself. But I’m here now. Now, I’ve got to keep working to stay here and keep going.”