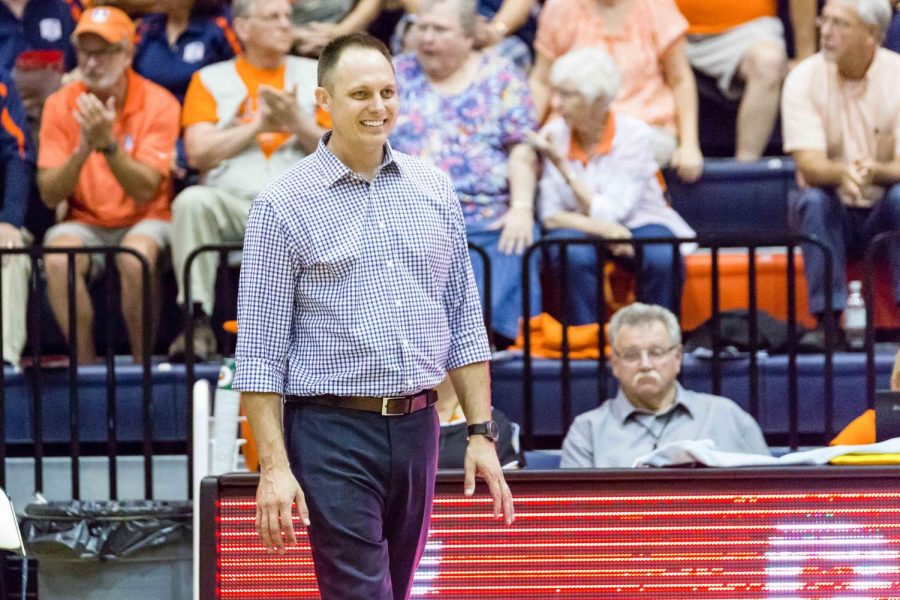 Illinois head coach Chris Tamas watches his team from the sideline during the match against Stanford at Huff Hall on Friday, September 8. The Illini lost 3-0.

When Illinois volleyball head coach Chris Tamas was hired from Nebraska on Feb. 10, 2017, it didn’t make headlines on the usual sports news channels.

But the signing did resonate early with an audience that has become so much bigger in the last handful of years: social media.

“When he made the transition here, I was still in high school,” said Morgan O’Brien, sophomore defensive specialist. “I saw he was super active.”

Tamas got his start on social media back in 2011, when he was named University of Central Florida recruiting coordinator and ran the team’s social media accounts on platforms like Instagram and Twitter.

“As much as we work, I try to spend as much time as I can with my family,” Tamas said. “I don’t just sit there thinking ‘oh I’ve really got to snap this.”

Back then, it was a part of his job, but now the “Tamas social media experience” is still a strong tool for how Tamas has gotten Illinois back onto its feet in just a short year at the helm.

Tamas said he uses social media to advertise the program and “what (they) are about.”

Tamas led the bounce-back effort two years ago as he came to Illinois after former coach Kevin Hambly missed the NCAA Tournament for the first time since 2012 and took a job with the defending national champion, Stanford.

Just like players on the floor, Tamas believes different platforms should be used for different things.

“I might use the platforms a little bit differently,” Tamas said. “Twitter is more about giving out information; Snapchat and Instagram are more for showing the inner workings of the team.”

Tamas said he thinks this presence on social media helps connect the team and the fans by presenting the human side of the athletes.

“I think the fans really enjoy it,” Poulter said. “They kind of get a glimpse into what we do here, and they know Chris a little more personally.”

Poulter said she thinks the accounts are good for player morale, and they always have Tamas’ accounts in mind while surfing the web.

“If someone sees something, they’ll be like, ‘Oh, did you see what Chris posted on Twitter?’” Poulter said.

For sophomore outside hitter Megan Cooney, Tamas is best on Twitter, where he uses plenty of GIFs.

Tamas uses the comical looping videos to interact with his audience, as well as movie references to hit home the point of his tweet.

For example, Tamas announced the team’s safe arrival in Colorado on Twitter with a “Dumb and Dumber” GIF and a hashtag referencing a joke from the movie.

Tamas’ Instagram has a different feel and is filled with pictures of his family, including his two kids.

Giving Tamas a follow-on Snapchat opens the gates to a personal view of Tamas’ eating habits.

“Anyone who follows me on Snapchat knows I love tacos,” Tamas said.

The head coach’s constant use of social media comes from the fact that he understands how effective it can be in today’s world. Each social media platform has its own face, telling a different side of Tamas’ life story. Although, each has also shown to be just as effective in connecting closer with areas of his job.

If one thing is the same across all of his social media profiles, it’s that it hasn’t gone unnoticed.

“I think he’s on there more than the rest of us (players),” O’Brien said.