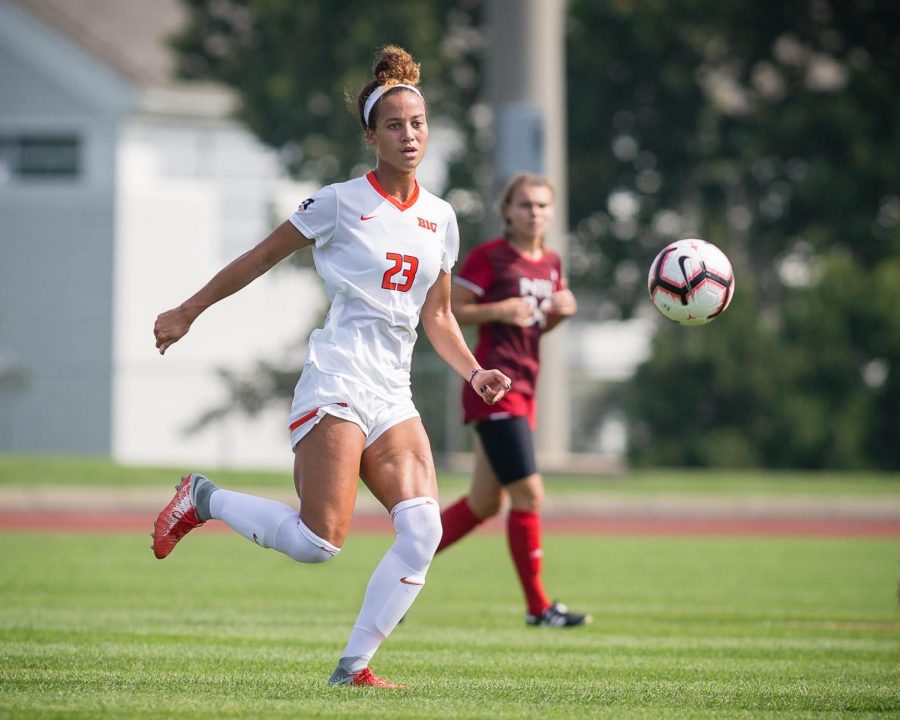 Illinois midfielder Arianna Veland passes the ball during the game against Northern Illinois at the Illinois Soccer Stadium on Aug. 26. The Illini won 8-0.

Illinois soccer kicked off their regular Big Ten season blanking Minnesota 2-0. Junior Arianna Veland netted both Illinois goals to lift the team to their first Big Ten victory. However, two days later the Illini suffered their first Big Ten loss against No. 22 Wisconsin in double overtime (1-0). The squad is now 6-3-0 on the season, and the program moves to 246-171-35 overall.

Head coach Janet Rayfield chalked the first match up against Minnesota as a “typical” one in Big Ten play, per Illini Athletics.

“Tonight was a typical Big Ten battle on the road,” Rayfield said. “We have been working on our restarts and that paid off tonight. We were able to get great service and good timing, and Arianna finished the job both times. But like we have done all season, we will get back to work, focus on cleaning up our passing, and get ready for the next challenge.”

Despite their victory Friday, during their Sunday matchup Illinois fell to Wisconsin in the 104th minute of the contest.

The Illini have also defeated two ranked opponents this season: No. 3 Duke and No. 14 Oklahoma State.

The men’s golf team opened fall match play this week at the OFCC/Illini Invitational. The team played qualifying rounds last week in order to seed the match-play for the main event this weekend.

Mike Small told Illini Athletics that while the Illini offense is in full swing, the defense at the Invitational has been lacking.

“Different day, same story,” Small said. “We played well most of the day, once again, but we didn’t close. We are playing a lot of good golf, evidenced by the fact that we are leading the field in total birdies. That shows that our offense is very good, but the reason we are in sixth place is because of our defense: our inability to save shots around the green and put the ball in the fairway consistently. We saw a solid round from Brendan today, and as a coach, I’m looking forward to seeing him build on that momentum.”

Three Illini freshmen are also playing the Invitational unattached. In a tie for 46th place, Tommy Kuhl marked a 147, or 7-over-par. Luke Armbrust finished day two with a score of 152, 2-over, while Adrien Dumont De Chassart sits at 74th place with a score of 159, 19-over.

The OFCC/Illini Invitational marks the first tournament the men’s golf program faces without senior Nick Hardy and Dylan Meyer, who graduated last spring. Olympia Fields is a par 70 course, and the field of competition includes: No. 1 Oklahoma State, No. 2 Alabama, No. 4 Texas A&M, No. T-11 California, No. T-11 Stanford, No. 14 Baylor, No. 20 Southern California, No. 23 UNLV, No. 25 Florida State, RV Purdue, RV South Carolina, Air Force and Indiana.

The men’s tennis team will open their abbreviated fall season at the ITA Milwaukee Classic this Sunday.