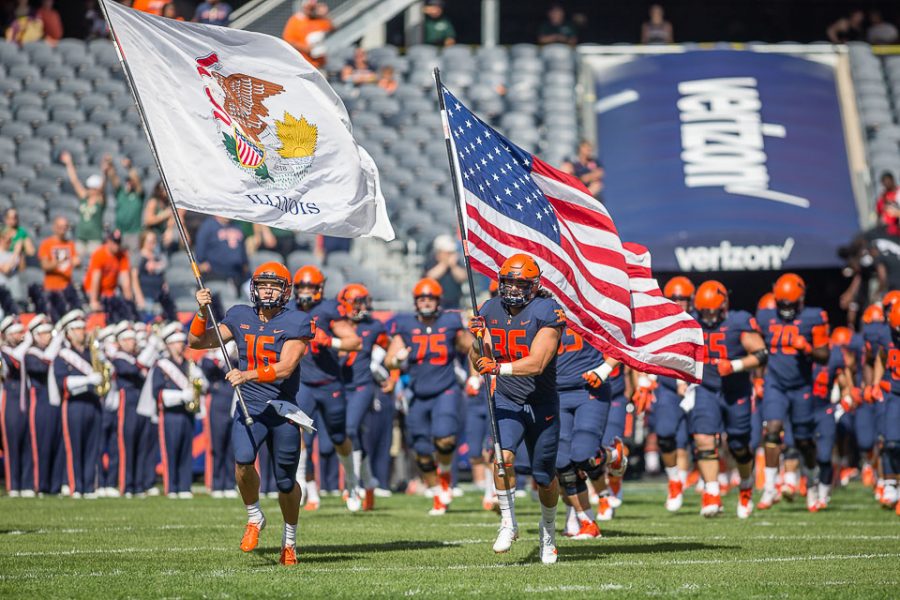 Illinois tight end Austin Roberts (36) and quarterback Cam Miller (16) carry the American and Illinois flags onto the field before the game against USF at Soldier Field on Saturday, Sept. 15, 2018.

As I begin to cover my fourth season of Illinois football, I wanted to try something new.

After each Illinois game, I will be sharing what I like to call the Press Box Bundle. Here you can catch up on all the information you might have missed during The Daily Illini sports staff’s coverage of the game. Each week I plan to share my quick in-game observations, a collection of tweets, our video and photo recap, and links to reporters’ stories.

The slow start sickness only caught the Illini for the opening drive this game.

Rod Smith wasn’t fooling around to start this game. Instead of experimenting early on (something that was seen in the previous two games), he gave the ball to his running backs.

And, wow, look what happens.

Illinois quickly demonstrated why the running back position has arguably the best depth on the team. Corbin and Epstein are two explosive backs that broke out a 30+ yard run for a scoring drive that took less than 54-seconds.

Oddly enough, while the Illini let USF find the end zone, they made quarterback Blake Barnett work for it. The defense kept up with the no-huddle, fast play calling relatively well. No massive plays early-on, ones that have become expected by a struggling secondary throughout the first two games.

Looking at the defensive line, having Tymir Oliver back is clearly a good thing, with his presence immediately being felt. The pressure from Oliver and Bobby Roundtree made for a quality first-half showing that included back-to-back batted down passes to stop a threatening USF drive.

Usually, it’s hard to grab people’s full attention on special teams, but the difference between these two squads was extremely noticeable. The fan’s and those filling press role couldn’t help but be amazed by the good and the bad. For Illinois, Chase McLaughlin is continuing his incredibly senior-campaign. The man is 100 percent from 50+ yards this season. Meanwhile, punter Blake Hayes continues to pin opponents deep. The special teams play once again continues to be one of the most productive parts of this team.

As for the Bulls, the ball was kicked out of bounds twice on kickoffs and extremely short on their one 43-yard field goal attempt. The crowd let out a couple laughs.

Odd play calling on the team’s first drive of the half set them back and appeared to change the feel of the second half.

Illinois found plenty of success rushing the football, but took a step away from that as the second half got underway. The play calling wasn’t hitting as well, and a handful of plays for negative yards prevented the Illini from charging down the field. McLaughlin was able to salvage one drive with a 41-yard field goal toward the end of the third quarter, but otherwise, Illinois continued to be stopped in its tracks.

Keep a close eye on this team, it was only a matter of time before the defense fell tired, and the USF offense then came to life. Barnett is an extremely accurate passer, and it began to show as the secondary bared its young and unprepared self once again. Barnett’s two scores in the second half came on two easy throws to wide open receivers.

Illinois had multiple chances to put the game away by either extending drives to milk clock or merely handing the ball off to its playmakers, but poor execution on both sides of the ball allowed for the lead to slip away.

As the fourth quarter went deeper and deeper, the feeling of an inevitable USF lead loomed. The Illini began to get a similar confused look on defense that they had against Kent State and Western Illinois.

The blown coverage on the game-winning touchdown for USF is almost inexcusable. On a third and 20, a receiver was left wide open for a ball that a fan fresh from the stands could have hauled in.

Stanley Green is one of the more experienced defensive backs on the team, but over the course of this season has failed to lead a young secondary that has been dying for in-game guidance. The early-season struggles by the defensive backs couldn’t be covered up this time by the score on the jumbotron. Instead, a couple missed reads ended up being the difference between a 2-1 start and the best start for the Illini since 2011.

Illinois has tripped over the hurdle time and time again.

The USF game had the opportunity to be a program-changing performance, but when it mattered most, the team demonstrated why it has been at the bottom of the big ten in recent history. The inability to close out games has plagued the Lovie Smith led teams.

The Bulls handed Illinois every opportunity to win the ball game, and the Illini just handed it back with a hardy “no, thank you.”

Eventually, it’s going to be time to work the legs out a bit and extend that vertical. If the Illini don’t act fast, the back foot of this team will continue to trip down the stretch

It’s important to note that positives can be taken from almost every game, but it means nothing unless the negatives are fixed. The way for this Illini team to prove that it can separate themselves from those that came before them is to simply brush off the loss and put up competitive games throughout a favorable Big Ten schedule.

Last season, the USF loss set the course for the rest of the Illini season. Now, the Illini have to show that only they can determine their course.

The @MarchingIllini is heading into the stadium now after stopping by fan’s earlier today.

Only an hour away from kick off now here at Soldier Field. #Illini pic.twitter.com/EajJaqaB09

M.J. Rivers is named the starting quarterback despite AJ Bush warming up alongside #Illini

Two HUGE run plays for Illinois lead to a touchdown. First Corbin for 32-yards then Epstein for the 43-yard score.

USF struggles with the run continue.#Illini 7 USF 0
10:54 to go in the first quarter

THE #ILLINI BAND IS PLAYING AFRICA THIS IS NOT A DRILL

McLaughlin hits a 53-yard field goal as time expires in the first half.

What a showing from Illinois.

What a season so far for McLaughlin. #Illini 16 USF 7
Halftime

USF scores for the first time since the 1st quarter.

And there goes the lead.

Secondary can't hold on and leaves a wide open man for a 50-yard score.

Illinois loses 25-19. Had a chance at the end but Rivers overthrew Smalling in the back of the endzone and the #Illini fall to 2-1