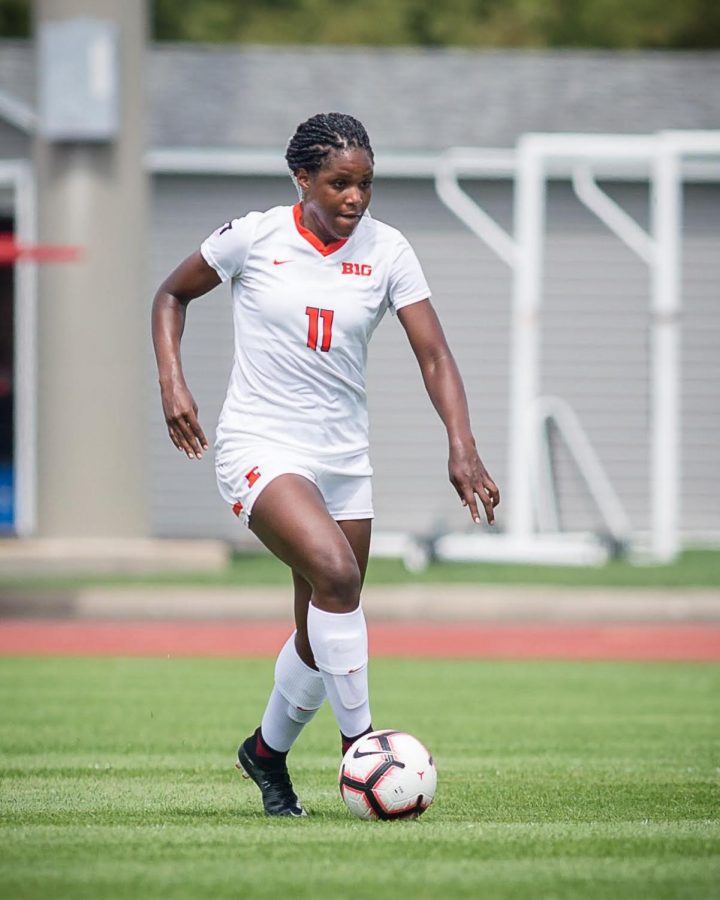 Illinois forward Patricia George (11) dribbles down the field during the game against Northern Illinois at the Illinois Soccer Stadium on Sunday, Aug. 26, 2018. The Illini won 8-0.

The Illinois soccer team fell to Penn State in a close 2-1 battle on a chilly Saturday evening. Illinois was hoping to come back stronger after their 2-0 loss against Ohio State last Thursday.

“You know, great Big Ten soccer match and I think you’ve seen since the Big Ten started, that there’s a real fine line in coming away with a victory or a tie,” head coach Janet Rayfield said. “I love the way we started tonight, we started the way I wanted us to start on Thursday night (against Ohio State). We fought and battled, and I feel for this team because they are really working at getting better and doing things. Tonight just hurts, we had a chance to put the game away, and they took their chance, and credit to them.”

The Illini had a strong opening and tried to open up the opposing defense while absorbing pressure high up the pitch. Senior Patricia George looked sharp, both in defense and in attack, and was always looking for a chance to advance down the right flank and whip in crosses.

Twelve minutes into the game, the Illini almost gave up a goal because of a fatal error in defense. However, two minutes later, there was action at the other end of the pitch when the Illini capitalized on an error by the Nittany Lions keeper. The rebound fell to senior Morgan Maroney who put it swiftly into the back of the net. The Illini scored the first goal of the match to lead 1-0.

Apart from another quick break by Penn State 30 minutes before half-time, the Illini looked solid in defense. A promising free-kick very close to the box brought hopes of a second goal but folded. They held possession well and kept applying pressure in the opposition’s half until the break.

The second half of the game started off slowly, with not much action in front of either goal. The Illini didn’t connect too many passes but managed to win back possession often. They visibly switched to a long-ball tactic, trying to feed the ball to their forwards who tried to get back in behind the opposition defense. Junior Arianna Veland looked good in her role, frequently winning tackles and distributing the ball around the pitch.

The three-back system was effective for the Illini until they switched to four, to be more defensive and see the game out. Penn State responded by starting to threaten on the break and found the equalizer in the 74th minute.

“They went to three back and pushed some numbers forward and we went to four and gave up the goal, so as a coach you always second-guess yourself a little bit,” Rayfield said. “The three-back has been great for us. The outside midfielders and defensive center-mid, that group works together to make sure we stay defensively sound, and they’ve done a great job of that.”

The Illini looked to hit back quickly, with a quick counter-attack led by junior Kelly Maday who was one-on-one with the goalkeeper, but the Nittany Lions turned the shot away for a corner. The rest of the half was played out by both teams, and overtime was evident.

Hopes were high for an Illini win, but they were very quickly foiled by a goal in the first minute of sudden-death overtime. The Illini didn’t get a single chance on attack, and Penn State scored to come back and clinch the win.

The recent results in Big Ten play have been disappointing for the Illini. They’re currently on a 1-3-0 so far this season. There are plenty of positives they can take away from this game in order to prepare themselves against Michigan State at home on Saturday, and for the rest of the season.

“I think certainly if you look at the first half and the way we were able to move and create chances and get corner kicks, we are going to take that away,” Rayfield said. “I think we have to work a little bit on the execution and finishing some of those, and some of our little details on restarts, we can be better at, and those little details hopefully turn to a goal and that’s all it takes to make a difference in this league.”