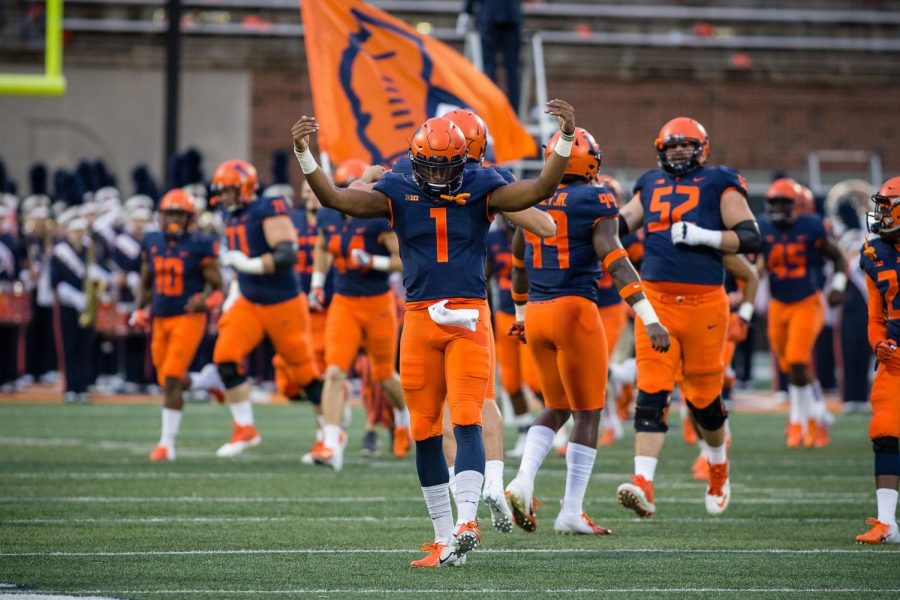 Illinois quarterback AJ Bush celebrates while running onto the field at the start of the game against Western Illinois at Memorial Stadium on Sept. 8. After two wins and two losses, this past bye week allowed the Illini to reevaluate and rest up.

It’s year three of the Lovie Smith era, but the Illinois football team is in a similar position to where it was a year ago.

At 2-2, the Illini are coming off their second consecutive defeat, though logistically, their results have gone differently than they went in 2017. A year ago, Illinois won its first two games against Ball State and Western Kentucky, but it dropped games to South Florida and Nebraska handily.

This time around, the Illinois is coming off two defeats where the team had a chance to win, falling 26-19 to South Florida and 63-24 to No. 9 Penn State, despite Illinois’ lead in the third quarter.

“We’ve had a chance to evaluate a lot of stuff,” said head coach Lovie Smith. “When you don’t have a game week, you get a chance to look at some of the things you’ve done, and that’s kind of where we are.”

Lovie said the team took advantage of the off week before Saturday’s trip to Rutgers, mostly by resting up and nursing various injuries.

For him, the bye week is an opportunity to get as many guys back, or close to back, ahead of the next two Big Ten games against Rutgers and Purdue.

“Four games, you have an opportunity to play one of the best teams in the Big Ten. We know where we are,” Lovie said. “I’ve never seen a bye week come at a bad time. To me, it’s perfect for us where it is right now.”

Injury updates on Bush and Co.

The last few weeks, the Illinois staff has been monitoring grad transfer quarterback AJ Bush and deciding how close he is to being able to make a full return to the field.

Bush went down with a hamstring injury against Western Illinois, and though the staff has noted he’s near a return, it remains unclear whether Bush will be ready in time for Rutgers.

Smith said it’s not a question of playing Bush at near-full strength or rushing him back; rather, it’s a matter of simply waiting for the medical staff to deem him healthy enough to return without aggravating the injury.

“Especially with AJ, especially with a hamstring,” Lovie said. “Most people don’t know enough about hamstrings to know when a guy is supposed to come back. Most of the time, guys come back too soon and reinjure their hamstrings; we’re going to try to avoid that.”

Though Illinois had its suspended players return against Penn State, safety Bennett Williams didn’t finish the game, and starting defensive lineman Jamal Woods went down with what appeared to be a serious injury.

For a team that has already had linemen Jamal Milan and Lere Oladipo suffer significant injuries, the loss of Woods hurts.

Smith already said Woods won’t play against Rutgers, though he may return this year.

“He has a significant injury, that’s about all we can say right now,” Smith said. “There is no surgery scheduled, anything like that, but he won’t play the Rutgers game, I can at least tell you that much. We’ll see how long it takes.”

First-year offensive coordinator Rod Smith is generally pleased with how his team has learned and implemented his spread, high-tempo offense through the first four games of 2018.

The week off, like with the rest of the staff, allows him some time to reevaluate what’s been going on at each area on the field.

“I try to evaluate every aspect of what we’re doing and how we can get better,” Rod said. “A lot of times, you take stuff out more than add stuff. To me, the more you add, the more confusion you get with a young group. We’ve got a young group; we’ve got to make sure we’re sound in our schemes, in our assignments.”

In his first game back from suspension against Penn State, sophomore receiver Carmoni Green posted four catches for 49 yards, a welcomed sight to the staff after the Miami-native stood out throughout training camp.

“(Green brings) some speed, some athleticism — which we needed, in my opinion, particularly on the outside,” Rod said. “I’m excited for Carmoni; (he) had a tremendous fall camp. Much better, much better than he did in the spring. He’s night-and-day better.”

Keeping it fairly simple has been a consistent strategy for Rod Smith, especially as the Illini have had receivers Mike Dudek and Edwin Carter Jr. go down with season-ending knee injuries.

With eight receptions for 64 yards through four games, Davis hasn’t overwhelmed opponents or stood out on the stat sheet, but he’s been more of a stable option for M.J. Rivers at quarterback.

Against Penn State, Davis took a reverse handoff from Rivers before hitting sophomore Ricky Smalling in the end zone for a go-ahead touchdown.

“He might’ve thrown the best pass of the year,” Rod said. “I told him, ‘Don’t get too excited, you ain’t coming to quarterback. But you can be the best-throwing wide receiver in the country, man.’ He brings stability to us. He’s not the fastest, twitchiest guy, but he’s been one of the more consistent guys from an assignment standpoint and catching the football when we throw it to him.”