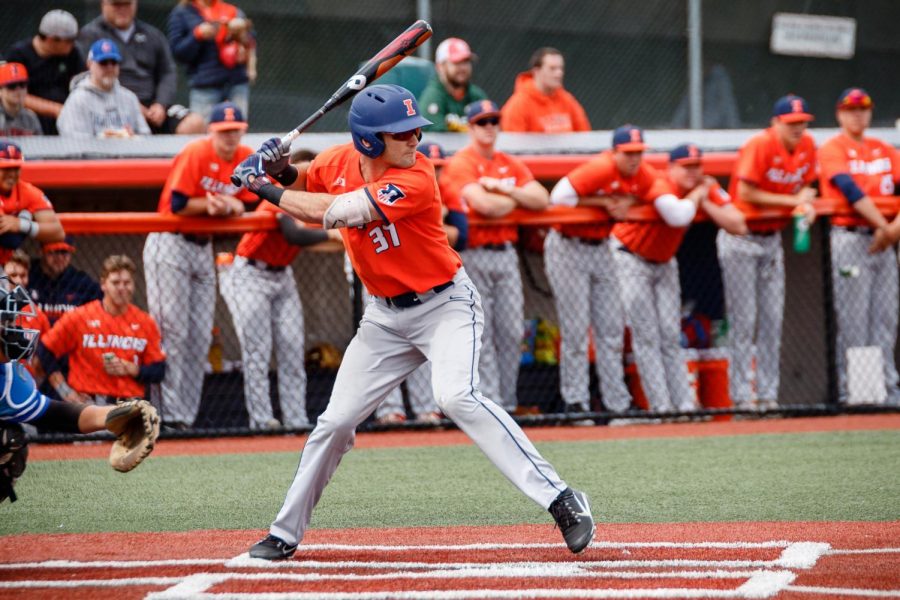 Illinois outfielder Zac Taylor gets ready to swing at the pitch during the exhibition game against Indiana State at Illinois Field on Saturday. The Illini tied 5-5.

While the Illinois baseball season doesn’t officially begin until February, the team is taking care of business as usual.

After this week, the Illini will have a two-week break from practices and games.

The contests helped remove offseason rust, according to head coach Dan Hartleb, allowing the entire pitching roster to throw at least one inning.

“A vast majority of returning players made strides over summer, but the thing I really want to figure out (is) kind of where we are with our young and new players, and how they are and what they do in game-types situations,” Hartleb said. “Sometimes, it’s like a deer in headlights when they first walk out, so we try to get some of those things away in the fall with these (exhibition) games.”

According to Hartleb, the entire 36-man roster got playing time against Eastern and Indiana State. Although the games both lasted about four-and-a-half hours, senior outfielder Zac Taylor felt they were worth every minute.

“They were two very long days,” Taylor said. “But it was still great to get out there and play with a bunch of new guys; by no means was it too long.”

Illinois welcomes in 10 new players this season and boasts the top recruiting class in the Big Ten, according to Baseball America. Two players, catcher Jacob Campbell and pitcher Aidan Maldonado, were selected in the 2018 MLB draft, but they declined their offers to play at Illinois.

“Every level you go up to, no matter what, they’ll have to adjust and keep up to speed, and that’s all you can ask for,” Michalak said. “I think (the new players) will be able to play a big role for us this year.”

Baseball is a game these new Illini are familiar with; however, the team chemistry is something they’re going to have to develop, and so far it’s going well, according to Taylor.

“I think we have a really unique team this year,” Taylor said. “We have a lot of returners and 12 to 15 seniors on the team. We have a lot of new guys coming in and a lot of older guys who can guide the team in the right direction. We all get along extremely well off the field.”

The recent exhibition games encapsulate more than just team success. They showcase the strides some older players made over the summer.

Seniors Jack Yalowitz, Michalak and Taylor played in the Northwoods League this summer, while the rest of the team had other various assignments across the nation.

Taylor, who played for the Madison Mallards, said despite playing summer ball the last four years, this year was special.

The Mallards boasted a few other Big Ten players, but no one else from Illinois.

“Five or six or guys from the team were all from the Big Ten, which was really cool,” Taylor said.  “We got a really cool pic at (the) end of all the Big Ten guys.”