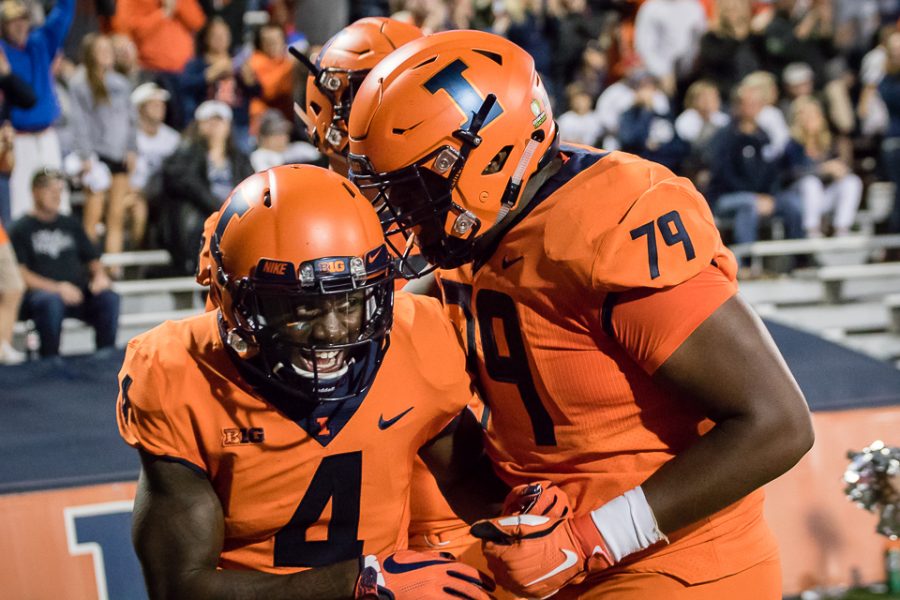 Illinois wide receiver Ricky Smalling (4) celebrates with offensive lineman Vederian Lowe (79) after scoring a touchdown during the game against Penn State at Memorial Stadium on Friday, Sept. 21, 2018. The Illini lost 63-24.

In 1905, a group of Purdue students took a cannon to Champaign to fire at the conclusion of their anticipated football win.

The cannon was confiscated at the game, as one cannot bring a cannon to a football game, no matter the time period.

It is said the cannon was kept in the possession of an Illinois alumnus until 1943 when it was suggested to be given to the winner of the game, and thus the tradition of the cannon trophy was born.

In more recent history, Purdue has had the cannon for two consecutive years, and the Illini look to take it back this Saturday at Memorial Stadium.

On top of the rivalry tradition, Saturday also is part of the University’s 108th Homecoming celebration.

It will be the 94th meeting between the Illini and the Boilermakers.

Illinois leads the all-time series against Purdue 44-43-6, but it will need a solid showing this weekend to prevent a three-game losing streak to the Boilermakers.

After missing the previous 2 1/2 games due to injury, quarterback AJ Bush returned to the starting position in the win over Rutgers, running for 116 yards and two touchdowns.

Bush also threw his first touchdown pass against the Scarlet Knights, in an 11-yard throw to Ricky Smalling in the fourth quarter.

Jartavius Martin and Del’Shawn Phillips are two defensive players who have some responsibility in the spike of those numbers. The two share the Big Ten lead and are tied for fourth in FBS with three interceptions each.

“Our freshmen are contributing right now. I talked about some of the changes made,” head coach Lovie Smith said. “I don’t know how many freshman cornerbacks have three interceptions right now. As a freshman, we like where we are with (Martin). And each year, freshmen are going to play. That’s just how I coach.”

Coming off the first Big-Ten win in a 13-game losing streak, the Illini have started to pick up momentum.

“We needed to get a win,” Smith said. “It was a big win for us. As I talk about an opportunity to be over .500 in Big Ten play, that’s big for our guys. To find a way to win, each game is going to get bigger and bigger.”

The new Illinois offense, under the direction of new offensive coordinator Rod Smith, has made massive improvements in this season.

The Illini have jumped at least 50 spots in the national rankings from 2017 to 2018 in multiple offensive categories, the largest being a 109-place jump in rushing offense.

“Last year, game after game we were very disappointed with the rushing attack,” Nick Allegretti said. “As an offensive lineman, you want to run the ball, so to do that five straight games and the have seven games left on the regular schedule to continue to do that, I’m incredibly excited to do that.”

Despite the improvements, Rod Smith is more than aware the team still has a ways to go.

‘Mike Dudek is out for the season’ is a headline that we have unfortunately read, before but this time, it’s different.

Dudek was preparing for his senior season with a full bill of health, but when he went up for a catch in the season opener against Kent State, he came down with the ball and the end of his season.

It was Dudek’s right ACL that was always giving him trouble. This time, it was the other knee and his LCL.

“It’s kind of a weird injury where there is not a lot of pain with it, so from that aspect I’m feeling good,” Dudek said.

The priority this time for Dudek is to focus on feeling better and less about hitting the field one more time. Although, if ever given the opportunity this season, he wouldn’t pass.

At his break-out year with Illinois, Dudek was named True Freshman All-American and second-team All-Big Ten honors in the only full season he played. He set the single-season record at Illinois for both receiving yards and receptions, 1,038 and 76, respectively, that fall and led the Big Ten in both as well.

In his last game, he had four receptions for 65 total yards and a seven-yard run for the 31-24 win over Kent State.

“I’m graduating in the fall with my master’s degree, so I’ll see what my mind’s like then, but more likely than not I’ll probably be done with football and move onto the real world,” Dudek said.

After first hearing the news, Dudek was shocked. He called his parents first and let them know he was all right, then he really let it sink in.

“Just knowing that I am most likely done with football its kind of a little easier to cope with,” Dudek said. “I don’t have to get through the long rehab process that I’ve done so many times, ‘cause that’ll just drain you physically and mentally.”

Despite all the negatives in his career, Dudek is grateful to have had the chance to live out his dreams and create the bonds and connections he has. Whether it be meeting five-year roommate, teammate and best friend Nick Allegretti or graduating twice from a top business school, Dudek is happy for the memories.

“It’s crazy; it’s been a whirlwind, a rollercoaster of events,” Dudek said. “But in the end, I’m standing here today breathing internally healthy, so I can’t be mad about too much.”