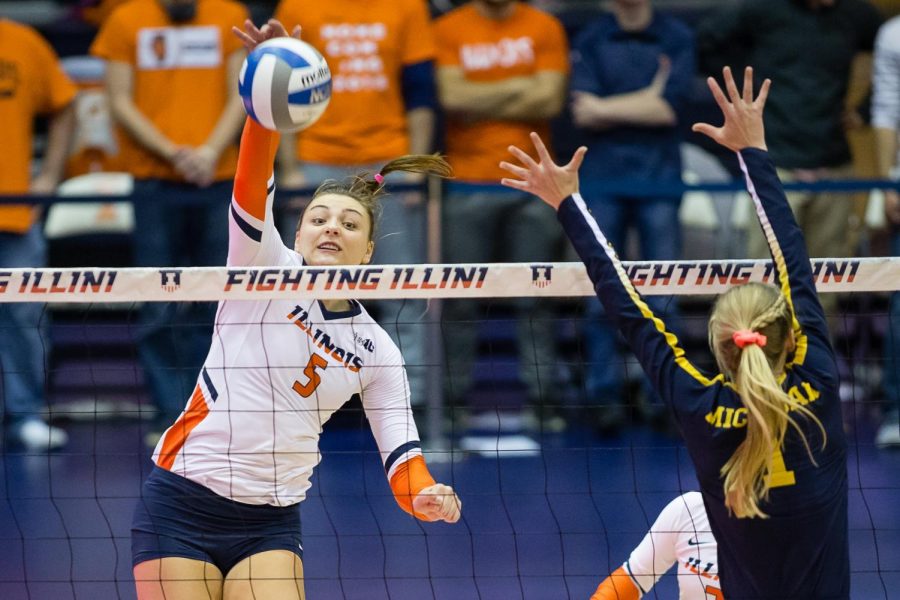 Illinois middle blocker Ali Bastianelli passes the ball during the match against Iowa at Huff Hall on Sept. 28 Bastianelli has recently achieved the school record in blocks and became the all-time block assist record leader in the Big Ten.

Nowadays, any Illinois volleyball fan can identify Ali Bastianelli, the starting senior middle blocker for the Illini, who is one of the best players to come through the program in recent years.

However, not many people would remember the young, out-of-state freshman who was thrown into a starting spot on a Big Ten team straight out of Marysville High School in Michigan.

“I didn’t wanna go anywhere too far, and Illinois was kinda that perfect distance,” Bastianelli said. “The Big Ten is a big draw for a lot of reasons.”

Since then, Bastianelli has morphed into one of the most prolific middle blockers in school (and Big Ten) history, setting the school record for total blocks in a win over Northwestern earlier this year along with setting the Big Ten all-time block assists record in the win over Michigan last weekend.

Bastianelli has always been good at blocking, but that alone isn’t what has made her into the best middle blocker in school history.

The 6-foot-3-inch senior attributed a lot of her collegiate success to the coaching staff she has worked with, a group that has allowed her to separate herself from other middles around the country.

“I had Kevin (Hambly) for two years; we have two middle coaches on our staff,” Bastianelli said. “They always push you to be your best.”

To be her best, Bastianelli had to become an all Big Ten middle, not just defensively but offensively as well.

Since the arrival of junior middle blocker Ashyln Fleming Bastianelli’s total kills have gone down, but her efficiency continues to improve. She registered a .392 hitting percentage, the highest of any player on the Illini with more than 200 total attempts.

No one has seen more of Bastianelli than fellow senior, setter Jordyn Poulter, who said the offensive development has not gone unnoticed.

“Her arm swing mechanics have changed since our freshman and sophomore years, so she can get a little more crack on the ball,” Poulter said. “It always helps to balance the offense when the middles are getting up quick.”

Few players are as involved during a volleyball set than a middle blocker. On top of offensive duties,  they have to contest the opponent’s best offensive players at the net, often covering a substantial amount of ground in a short time almost every possession.

The grind wasn’t something Bastianelli has always embraced.

“My freshman year, I was definitely overwhelmed by that,” Bastianelli said. “Not that I wasn’t used to being in the middle, but the Big Ten was a whole other beast that I was not mentally ready for, and getting used to that was a huge step for me.”

Between her freshman and sophomore years, Bastianelli saw her total blocks jump from 167 blocks in 120 sets to 201 blocks in 112 sets, still a career high for her.

For junior outside hitter Beth Prince, Bastianelli is someone she doesn’t have to worry about.

“It’s awesome to have teammates you can trust,” Prince said. “Everybody on the team trusts her to do her job and have a steady emotional presence as well.”

Bastianelli said the constant pressure helps her stay focused on every point, and it’s even become her favorite part of playing middle blocker now.

“Whether you get a touch on the block or not, you’re still up in the play and have such a huge potential to make a difference in a game, and I love that,” Bastianelli said.

Even the touches that don’t make Bastianelli’s record-setting stat sheet are important for the Illini’s success, according to Poulter.

“It’s pretty deflating when you get blocked,” Poulter said. “It’s always great to have blockers in the front row that slow down touches and stop hitters.”

Behind Bastianelli’s defensive presence, the Illini have increased their digs per set and are on track to improve their total block numbers from a year ago, despite losing former player Brandi Donnelly to graduation.

Bastianelli’s activity may go unnoticed by some, but Tamas appreciates what he’s working with.