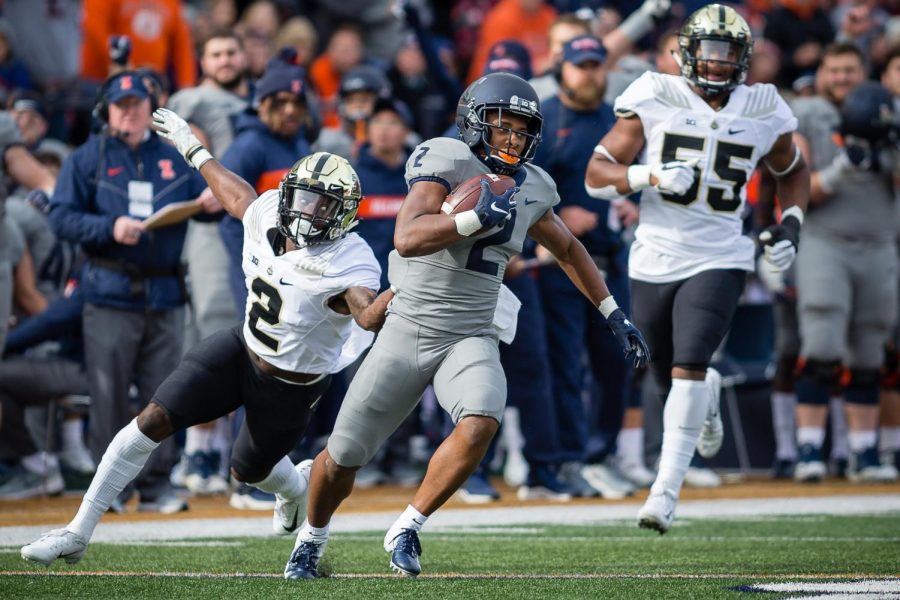 Illinois running back Reggie Corbin runs with the ball after making a 52-yard catch during the game against Purdue at Memorial Stadium on Oct. 13. Corbin heads home to Maryland for the first time in his collegiate career Saturday to play the Terrapins.

Maryland has been in the Big Ten since 2014, but when the Illini take on the Terrapins in College Park on Saturday, it will be the first meeting between the two programs.

Head coach Lovie Smith admitted the team’s knowledge is slim about Maryland, which is 4-3 (2-2 Big Ten) and fresh off a 23-0 blanking at Iowa. Maryland is also under the leadership of an interim head coach, Matt Canada.

“Don’t really know what to think; don’t know a lot about Maryland’s program,” Smith said. “Except for what we see right now.”

But for Illini running back Reggie Corbin, the Terps are full of familiar foes.

Growing up in Upper Marlboro, Maryland, and playing his high school ball in Washington, D.C., at Gonzaga College High School, Corbin played with, and against, some of the Terps’ current players.

Of course, there is also Illinois transfer linebacker Tre Watson.

Corbin has inside knowledge about his opponents. However, in the midst of a career year, Corbin isn’t worried about his relationships.

“The good thing about them knowing me is that I know them as well,” Corbin said. “They’re really good football players; you just have to go out there and don’t look at them any different, just play as hard as I can. That’s the only thing I can control.”

The junior has racked up 584 rushing yards throughout the first seven games of this season — compared with 78 yards in 2017.  In fact, Corbin is third in the nation and first in the Big Ten with 7.89 yards per carry on 74 attempts.

His six touchdowns are also a career mark, and in Illinois’ 49-20 loss to Wisconsin, Corbin broke out for an 80-yard touchdown, the 10th-longest rushing score in program history. Against the Badgers, Corbin picked up his second 100-yard rushing performance this season.

Corbin only recognized the historical meaning of his 80-yard burst after former Illinois quarterback Jeff George told him after the game.

It was the first rush of that length by an Illini player since 2007, when Daniel Dufrene went for 80 yards to score in the program’s win at then-number 1 Ohio State. Corbin’s run was a yard longer than Rashard Mendenhall’s 79-yard touchdown in the Rose Bowl against USC later that season.

“You get put up there with those guys, like Mendenhall, man, that’s a blessing,” Corbin said. “Hopefully my kids get to see that one day, and their kids. I was really happy about that.”

Despite these positives, Corbin’s most recent game wasn’t just filled with success. The junior fumbled twice at Wisconsin, two of the team’s five turnovers on the day. After the game, he was openly upset with himself, and on Monday, he remained critical of his performance.

“Reggie wasn’t the only one to put the ball on the turf or turn the ball over,” Rod said. “I’m glad it hurts him; I’m glad he feels that way because it means something to him. That’s important; we talk to our kids all the time about valuing the football. That’s the program in your hands; you can’t let it go.”

The Maryland native has his focus set on helping his team get its second Big Ten win of the season and get back to .500 on the year.

According to Corbin, about 50 family members in total will be in attendance. For the running back, the only  break in preparation this week has been getting tickets for everyone who wants to be there.

But other than that, it’s been business as usual.

“I’ve been trying not to think about it,” Corbin said. “You think about it too much; Saturday’s a long time away. I’ve just been talking to my family, trying to get some tickets together for everybody. It’s going to be exciting. It’s a blessing to go back home and finally get to play in front of everybody.”

For Corbin, it’s about getting work done on the gridiron. For his family and friends, it’s a homecoming affair, with their guy as the guest of honor.

“Everybody kind of just wants to see me; I don’t think they care about the game that much,” Corbin said. “I haven’t been home since the summer, just because I spent all my breaks going places to train instead of going home. I think they’ll be more excited to see me. My little cousins look up to me, like my nephews and my niece — I think they’ll be happy to see me. I wish I had time to go to their games, but I don’t.”

For the Terrapins, the Illini come into town at a time when the team is desperate for some positive news.

Coming off a scoreless loss against No. 18 Iowa, a win would go a long way to steady a program surrounded by controversy.

Knowing a lot of the guys he’s up against this week, Corbin shrugged off questions about Maryland’s state of mind.

Like him, many of the Terrapins’ players are from Prince George’s County, or PG County; people from PG County don’t show it when they’re in a tough situation, according to Corbin.

“One thing I know about them is that they’ll always keep their swagger,” Corbin said. “Everybody from that area walks with a certain swag. And regardless of what’s going on, you’d never know. As you watch the film, you can tell that it doesn’t look like they have an interim head coach. They walk with their swagger and they’ll always stay like that, regardless … They’ll always be that way, that’s just how everyone from PG County is kind of built.”

With a lot of fanfare surrounding his return to the area and the stakes being high for both programs, Corbin knows the importance of keeping a clear head.

“I’ve just got to stay focused, don’t worry about any of that,” Corbin said. “I’ll see my family after the game. Up until then, up until that game and during the game, I’m locked in and focused on that because I owe that to my team.”