Illinois shows too little, too late 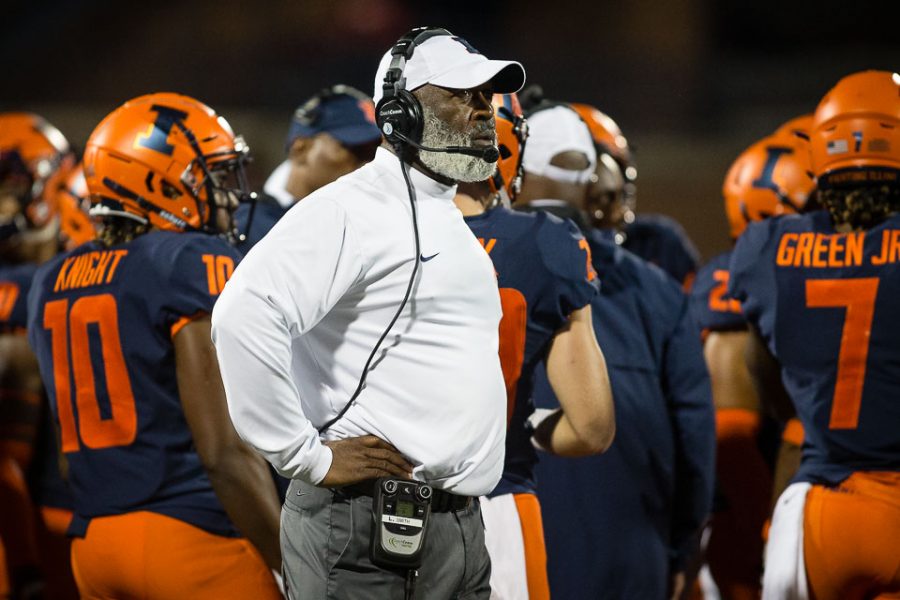 Illinois head coach Lovie Smith looks up at the scoreboard during the game against Western Illinois at Memorial Stadium on Saturday, Sept. 8, 2018.

Maryland and Illinois both commented on the importance of their first-ever matchup throughout the week, but only one came prepared.

In the 63-33 loss, Maryland collected 431 total rushing yards as the Illinois defense continued its long-standing struggles.

Illinois was first on the board with a 32-yard field goal by kicker Chase McLaughlin, but on the next kick return, Maryland ran for a 97-yard touchdown taking away the only lead the Illini would have throughout the game.

Maryland quickly picked up another touchdown to finish out the first quarter, only to be answered by more McLaughlin field goals.

McLaughlin collected the bulk of the points for the Illini with 32-, 34-, 39- and 26-yard field goals sprinkled throughout the first half, with the exception of the final field goal being in the third.

After a week of quarterback speculation, M.J. Rivers trotted out to start the game for the Illini, officially burning his redshirt eligibility. The freshman found little offensive momentum behind a poor showing by his receivers and an efficient Terrapins defense.

The freshman completed three of his thirteen attempts for 45 total yards in the first half before being taken out of the game due to a concussion and replaced by grad-transfer AJ Bush.

Late in the third quarter, Bush handed the ball off to Reggie Corbin, who found a gap and broke away for a 69-yard touchdown. Adding to his stats, this long touchdown for the junior was the highlight of his strong offensive performance ,where he had 18 carries for 155 yards.

Although, at this point of the game, Maryland had run the score up to 49 to Illinois’ 19.

The Terrapins’ running back Javon Leake ran consistently through the Illini defense, averaging 28 yards a carry for three touchdowns.

The sophomore only had a single rushing touchdown under his belt before Saturday’s game.

Illinois collected two more touchdowns in the fourth quarter when Bush connected with Dominic Stampley twice for a 61-yard and 84-yard touchdowns.

For the defense, linebacker Jake Hansen led the team in total tackles with eight solo tackles and three assists. He and defensive lineman Bobby Roundtree were the only players with tackles for loss against the Maryland offense. The Illini also ended their takeaway streak that was tied with the Terrapins.

Illinois will return home next week for a matchup against Minnesota.