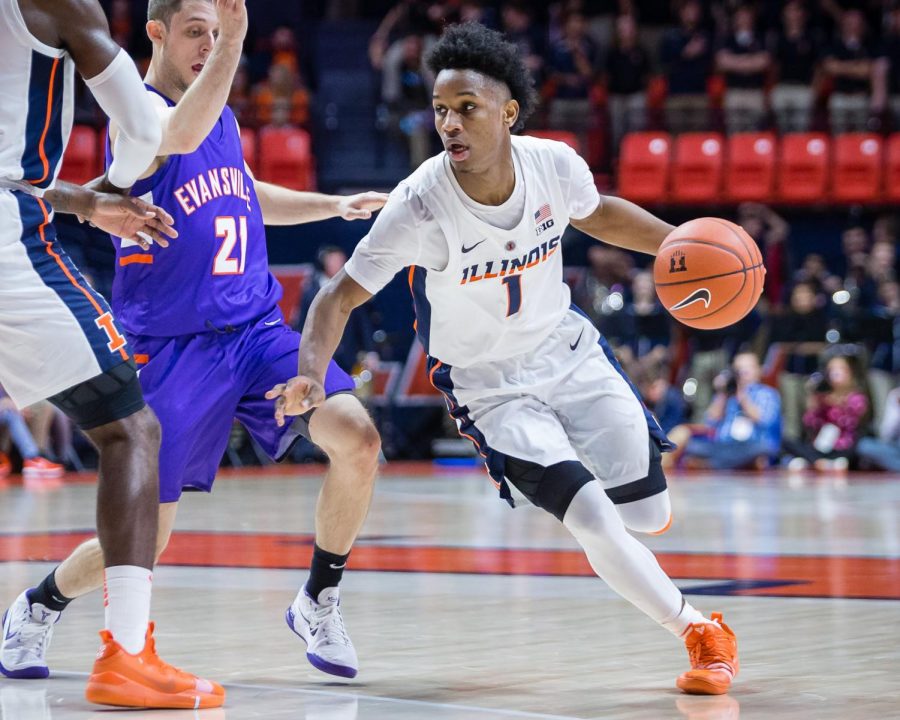 Illinois guard Trent Frazier (1) drives to the basket during the game against Evansville at State Farm Center on Thursday, Nov. 8, 2018. The Illini won 99-60.

When head coach Brad Underwood came in, the Illinois men’s basketball team had missed the NCAA tournament four, now five, years in a row for the first time in University history.

Headlined by three of the top 10-ranked teams in the nation, the tournament was a chance for the Illini to display their progress on the road back to national relevance.

But Illinois went without a single win on the weekend, losing all three games against No. 3 Gonzaga, Iowa State and Xavier State. While in all three games there were moments of positivity for Underwood’s squad, the consistency still wasn’t there.

After hanging with the No. 3-ranked Gonzaga in the first half, who ended up winning the tournament and then defeating No. 1 Duke, subsequently going into the break down by seven, Illinois gave up a run to start the second half. The Illini ended up down by 13 with 14 minutes to go, and piled up fouls.

However, the Illini didn’t give in. The team was led by sophomore guard Trent Frazier, who had 27 of his 29 points in the second half, including a pair of threes from far beyond the college line. The second of the two was an and-one that brought the Illini to within two points of their opponent.

The shift for Frazier came at the half. Freshman forward Giorgi Bezhanishvili says Frazier told the team he “had to turn up.” After, a strong defensive series led to a shot clock violation, and Illinois had the ball with a shot to tie or take the lead with 30 seconds left.

Frazier got a good look at a three to lead after shaking the Gonzaga Bulldogs’ Rui Hachimura but missed every shot. Gonzaga collected the rebound, made its free throws and took the win 84-78.

Illinois forced over 20 turnovers again, with 12 of the 22 Gonzaga giveaways coming from its point guards.

“(Illinois is) a team that is built to bring a lot of adversity,” said Gonzaga head coach Mark Few. “They put it on you sometimes and put you in very uncomfortable positions.”

The Iowa State game was a different story.

The Illini got out to a fast start behind a strong play from freshmen guards Ayo Dosunmu and Alan Griffin, the latter having come off the bench to provide Illinois with all 11 of his points in the first half.

“I felt good. My teammates got me going,” Griffin said.

Behind the strong start from Griffin, the Illini took a four-point lead into the half, but that’s where the good news ended.

Dosunmu finished with 13 points, behind Frazier who led the team with 15 — on 17 shots; however, the star freshman on the court was Iowa State’s Talen Horton-Tucker. The Chicago native lit up the second half with a variety of moves, from a step back three-pointer to a no-look pass on the break to lead the Cyclones to an 84-68 win behind his game-high 26 points and game-high 14 rebounds.

Underwood was complimentary of Horton-Tucker, who was almost an Illini before speculation of issues between him and Dosunmu led to Illinois not offering the Simeon star.

“Give Talen a lot of credit,” Underwood said. “He’s really good. He’s a guy that will have every opportunity to be the freshman of the year in that conference. He was terrific tonight. (I) knew he would be.”

Illinois finished the weekend in the seventh-place game against Xavier. Again, the Illini hung around in the first half before falling apart in the second. Griffin got his first start but struggled with no field goals and finished with five turnovers.

Underwood wasn’t worried about the freshman though.

“Alan’s gonna be a tremendous player,” Underwood said. “That’s my fault. I need to help him understand how to do his job better.”

Underwood was, however, worried about the defense that allowed all three opponents to eclipse 80 points on over 50 percent shooting.

“This is on me,” Underwood said. “This is a young team. I’m more concerned with the fouling than with anything philosophically that we are doing.”

Dosunmu finished another productive outing, leading the Illini with 19 points and finishing the weekend averaging 13 points. He received recognition from NBA legend and eccentric ESPN color commentator Bill Walton, who called all of the Illini’s games in Maui.

Underwood said it’s important for Illinois to build around its young players, and this tournament was another step toward that goal.

“I don’t want good teams, I want a great program,” Underwood said. “We’ve got to find our way. I like this foundation we are laying and continue to build, and we are going to fight for that every single day.”

It’s a foundation and culture Underwood said he’s been fighting to establish since he arrived in Champaign, but it’s one that still seems to be evading the young Illini. While it may be frustrating for the fanbase, Frazier posted on Twitter  after the Xavier game that the team wants “Illini Nation” to stick with them.