Underwood switches it up, Illini rain threes in rebound victory 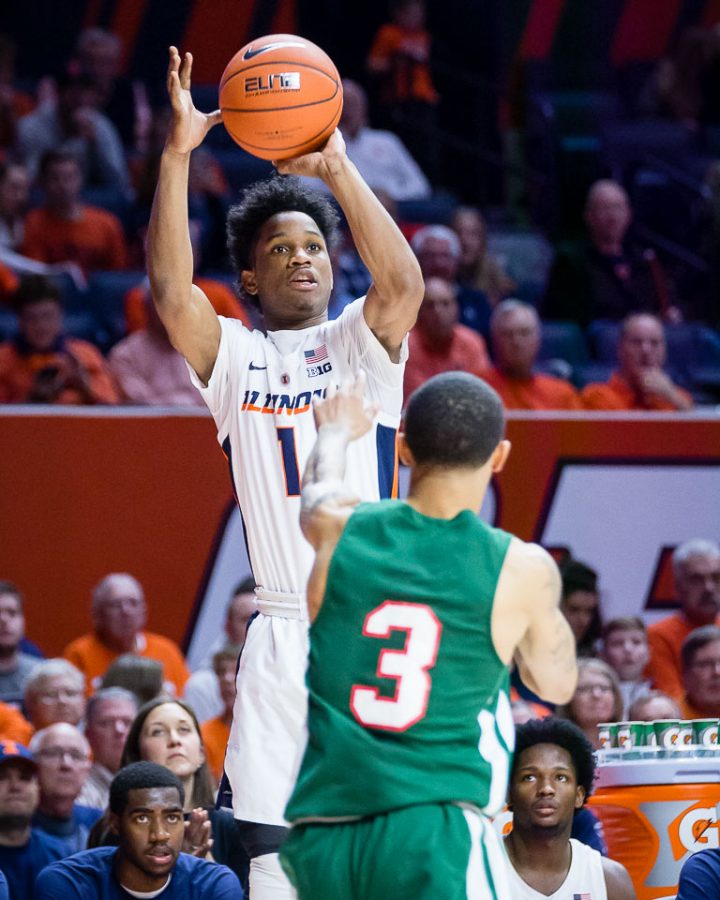 After an 0-3 showing at the Maui Invitational, head coach Brad Underwood shook up his lineup and rotation against Mississippi Valley State (1-6) on Sunday afternoon.

Freshman forward Samba Kane saw action too, for the first time as an Illini.

The seven-foot Senegal-native displayed a better shot than he was credited for during offseason workouts and open practices, going 3-for-6 from the field, sinking a smooth mid-range jumper for his first Illini points.

Kane also seized on a pair of easy buckets, dunking twice during the second half, and he also had a block down low to go with a pair of rebounds in his 12-minute debut.

“I think (Kane) had a chance to get on the court (before today),” Underwood said. “I think he’s a guy that gets better every single day in practice. For him, it’s more on the defensive side, understanding positioning (and) help-side defense.”

Underwood hasn’t shied away from giving walk-ons meaningful time on the court this season, particularly Tyler, who has played in four of the Illini’s six games (with an average of five minutes per game).

Each walk-on had their moments against the Delta Devils.

Late in the first half, Oladimeji got in the paint, making a shot and drawing a foul. Though he missed the and-one free throw, senior Aaron Jordan grabbed the rebound, setting up an eventual open look from three-point range for Underwood.

The redshirt-junior backed up his father’s confidence in playing him early, knocking down the attempt to put the Illini up 13 points. On the other end, Oladimeji capped a strong defensive possession at the top of the key, denying a pass and forcing a shot clock violation.

Illinois scored 54 points off the bench (compared to 32 from the starters), the most it has this season, in part due to the production of guys like Oladimeji, Underwood and Kane.

Illinois guard Trent Frazier, who led the team with 16 points, called Kane’s contributions “big time” but noted that there’s a lot to work on for the raw freshman.

Nichols gets right after Maui

Kipper Nichols has not had a strong start to the 2018 season, struggling to score especially during the Maui Invitational, where he only put up nine points in three losses.

But the Cleveland-native had a much better showing against Mississippi Valley, shooting 6-for-8 from the field and hitting two of four three-point attempts. Nichols added three assists, turning the ball over once and staying out of foul trouble in his 14 minutes of action off the bench.

The game was much more reminiscent of the season-opener against Evansville, in which Nichols scored 13 points on 5-for-7 shooting, with two assists, zero turnovers, a block and only one foul.

Underwood lauded Nichols’ improvements, but he wants more from him.

“If the ball goes in, the ball goes in,” Underwood said. “Kip, we all know, is a guy who can make baskets, and I take that for granted. Kipper’s proven he can be a double-digit rebound guy in big games, that’s something I’m looking for.”

“I keep wanting more for Kip,” Underwood said. “I want seven, eight rebounds; I want him to be that vocal piece defensively that he can be. He had a tough tournament in Maui. I’ve had a lot of conversations with him. He’s going to be fine. He’s just got to simplify things. It all starts with hard work.”

The Illini love the three-ball.

The team shot 30 treys, sinking a record-tying 16 of them, to shoot 53-percent from beyond the arc against the Delta Devils.

Underwood said it’s part of the team’s identity as an offense this season.

“I think that’s a little bit about who we are,” Underwood said. “I really, really like them when they go in. But I think that’s the one thing, we know we’re going to be that team a little bit. We’ve got a lot of guys who can make them. I like that concept. I think we have to find a little better balance, throwing the ball into the paint.”

The Delta Devils employed a two-three zone, which the Illini thwarted by converting on its many perimeter attempts.

Underwood doesn’t want his team to be as dependent on the three-ball moving forward.

One-dimensional teams are much easier to defend.

“We hadn’t seen a ton of matchup zone. We worked on it a bit yesterday,” Underwood said. “I thought we did some nice things early, especially from the three-point line. We were getting a little crazy there shooting them, where we missed Adonis and Giorgi.”