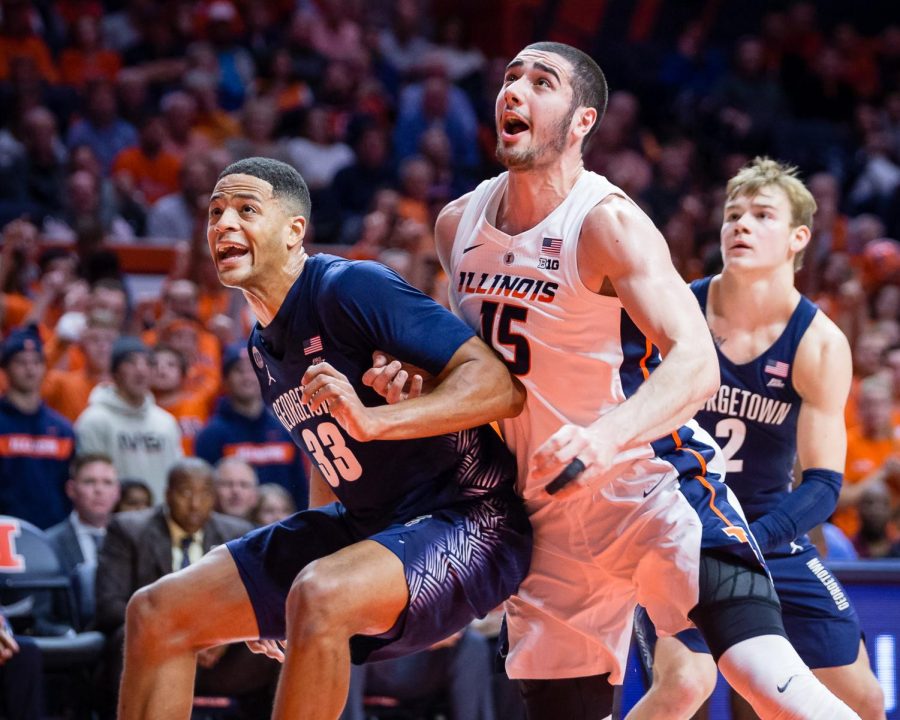 Illinois forward Giorgi Bezhanishvili fights for position to rebound a free throw during the game against Georgetown at the State Farm Center on Nov. 13. The Illini lost 88-80.

Through eight games, which has made up the program’s worst win-loss start in over a century, Illinois basketball has allowed opponents a significant edge in both free throw percentage and attempts.

At Nebraska over the weekend, the Cornhuskers put up 30 free throws as the Illini were called for 23 fouls. Nebraska sank 25 on the way to a 75-60 win.

The Illini shot just 13 free throws on the other end, making eight.

Those stats are a fairly accurate representation of the season, as Illinois has struggled mightily on defense, while also failing to get to the line as often as its opponents.

“We keep trying to remedy the foul problem,” said Illinois head coach Brad Underwood. “It didn’t matter where (Nebraska) caught it. Until we quit slapping and reaching, putting teams on the line 30 times, it makes it very, very difficult to win, especially on the road.”

Freshman Ayo Dosunmu knows how negatively the Illini have been affected by fouling opponents on the defensive end. The Morgan Park High School graduate attributed the team’s Maui Invitational struggles in part to the charity stripe and how easily opponents head for a trip to the line.

“You look at Maui, a lot of teams weren’t really getting field goals at the end of the first half,” Dosunmu said. “We’d let them get into the bonus. When you’re shooting free throws every time you foul somebody with eight minutes left, that gets a rhythm going when they can’t score field goals. At the end of the day, we’ve got to move our feet and get tough, like I said.”

Dosunmu blames himself largely for the team’s issues, though he is certainly not the only player who has contributed to the team’s foul-plagued start on defense and lack of ability to draw fouls offensively.

The guard has only attempted 20 free throws, of which he has made 12.

That’s still more than any other Illini.

Illinois has put up 117 free throws, making 79 of those attempts to rank 311th in free throw attempts and 225th with a 67.5 free throw percentage.

Underwood attributes it largely to his team’s youth. The Illini only have one senior and four returning scholarship players from last year’s 14-18 squad.

“Every team I’ve ever been around, young teams foul,” Underwood said. “They’re still looking at positioning and schematics.”

Freshman forward Giorgi Bezhanishvili has arguably been the surprise of the season for Illinois, averaging 10 points and 4.9 rebounds per game on 50 percent field goal shooting after coming into the program as an unheralded and unproven talent.

“(Bezhanishvili) committed two fouls on offensive rebounds. (Nebraska) had the ball and he just reaches in and smacks them,” Underwood said. “Those are intelligence plays. Those are things where we’ve got (to) not become frustrated because we don’t score the ball, and just run back and do our job. Those are things we’ve got to grow from.”

Those stats have had a great impact on the win-loss column.

It more than covers the six-point loss to now-No. 1 Gonzaga and is just a point short of covering the difference in Illinois’ 84-68 loss to Iowa State. Notre Dame made 11 more free throws than Illinois, going on to win 76-74.

Lone senior guard Aaron Jordan thinks fouling and getting to the line are each reflective of effort.

“The harder you play, the more you won’t foul,” Jordan said. “Fouling is a mistake. When you react, if you’re in reacting mode all the time, you’re going to foul. It’s simple; you’re a step late.”