Illinois to play Friday in Sweet 16 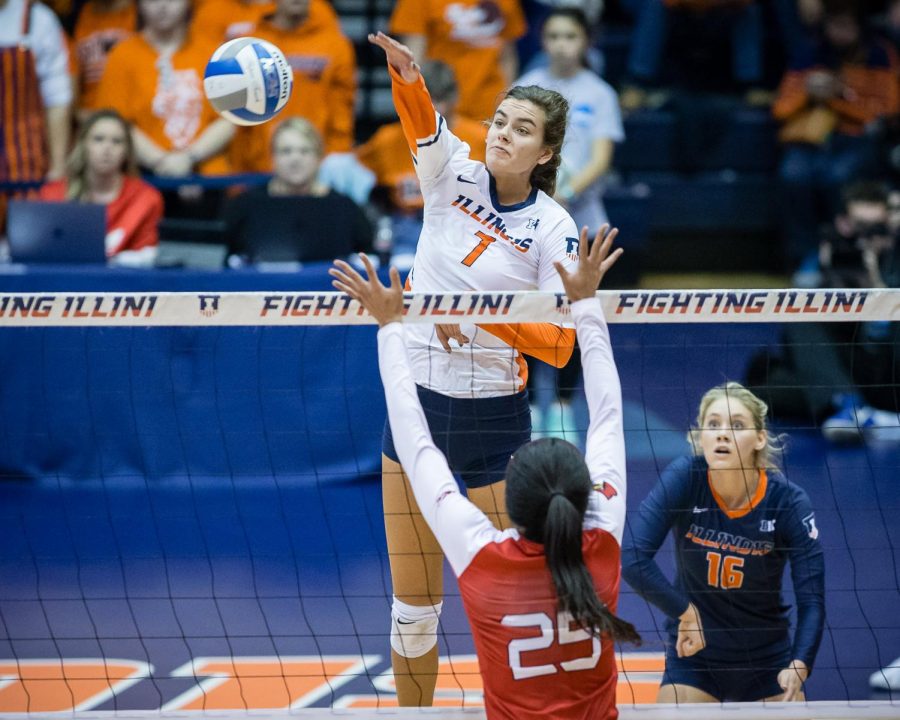 Illinois outside hitter Jacqueline Quade spikes the ball from the back row during the match against Louisville in the second round of the NCAA tournament at Huff Hall on Saturday. The Illini won 3-1.

NCAA tournament play will return to Huff Hall this Friday as the Illinois volleyball team competes for a spot in Saturday’s regional final.

Illinois advanced to this weekend’s competition after beating tourney newcomer Eastern Michigan on Friday in three sets and Louisville on Saturday in four. This Friday, Illinois will face No. 15 Marquette in the regional semifinal — making Marquette the first ranked team Illinois will encounter so far during the tournament. The winner of the matchup will go on to play the winner of the second regional semifinal game between No. 8 Wisconsin and San Diego.

If both Illinois and Wisconsin advance to the regional final, it will be the first time both teams play against a familiar Big Ten foe in the postseason — the Illini and the Badgers have a split record this season, with both teams beating the other at home in four.

But before Illinois can turn its attention to the next competitor, it has to focus on Friday’s game. While Marquette suffered a loss against Creighton in the Big East Championship match, the team is on a two-game winning streak, having swept both High Point and Cincinnati in the first and second rounds.

And when it’s the postseason, every match could be anyone’s game — something head coach Chris Tamas emphasized to his team.

“Everyone knows. Everyone on this team knows everyone on this level is good,” Tamas said. “We were in the same position last year playing against Washington; we beat a good Washington team on their home court to get (to) this point. Marquette’s good; any team that you’re going to play from here on out is going to be really good, and you need to bring your best game to be able to compete.”

For Tamas’ seniors, the reality of the competition is something they all are aware of, whether they’re at the service line or taking swings up at the net.

Senior setter Jordyn Poulter recognizes in spite of all the individual recognition she and her teammates are receiving right now, everything they do boils down to team effort.

“We’re just in a really important part of our season right now,” Poulter said. “Individual awards are nice, but when there’s a bigger team picture and potential, team success ahead of us, that stuff kind of gets pushed to the side.”

Pushing all the accolades and achievements aside — though Poulter, her fellow senior Ali Bastianelli and junior Jacqueline Quade all received All-Region honors alongside Tamas, who was named Northeast Region Coach of the Year — means putting in work on the court before Friday, trying to reach that next level of play that is necessary in NCAA tournament competition.

Because in spite of all the pressure, sophomore Morgan O’Brien and her teammates know the only game they can control is their own.

“It’s always just been about what we do, because as long as we can adjust on the go, then we’re going to find the most success,” O’Brien said.