Like it or not, Illinois basketball’s record makes sense 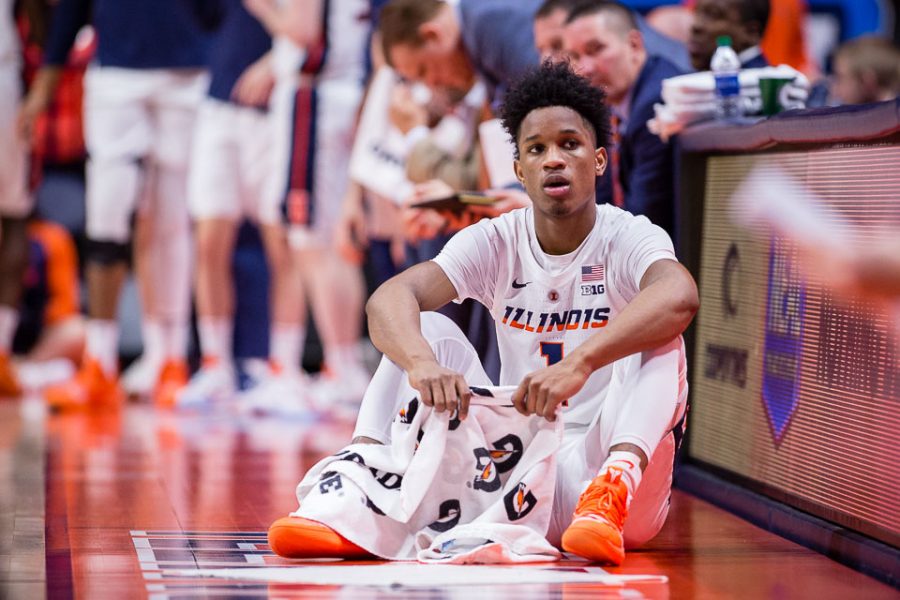 Illinois guard Trent Frazier (1) waits to enter the game during the game against UNLV at State Farm Center on Saturday, Dec. 8.

Let’s get one thing straight: heading into the 2018-2019 basketball season, the Illini were never going to be dancing.

Looking toward Big Ten play, an 18-game stretch against a conference with the most ranked teams in the country, Illinois sits at 4-9.

Realistically, this team should be soundly at five wins. Dropping a game against Florida Atlantic University at home is objectively bad. However, I comfortably will say it’s the only game of the season Illinois should have won and did not.

The Illini should have taken each one of those games with exception of Georgetown. The Hoyas are currently sitting in a first-place spot in the Big East with an 11-3 record and are a legitimate tournament team.

The matchup, to begin with, wasn’t a great one for Illinois. The athleticism across the board from players like freshman James Akinjo and veteran big man Jessie Govan was really a recipe for disaster against a young Illinois team only one game into its season without leading-scorer Trent Frazier.

With that being said, every other game on that favored nonconference list Illinois could have taken with ease.

Now, a case can be made for Illinois grabbing one of its three “pick ’em” games on the year. The matchups against Iowa State, Xavier and Missouri all began with neither team listed as a clear favorite.

Nevertheless, I would claim Illinois was the underdog in each one of these situations.

In Maui, the team had to play back-to-back-to-back games, with the first being a thrilling contest against current No. 7 Gonzaga. Not to mention, both Xavier (9-6) and Iowa State (11-2) have been high-major programs over the past several years with a foundation of winning. Xavier has only missed two tournaments since 2001, and Iowa State was on a six-year tournament run of its own until missing last season.

Sure, upsets happen, but I almost pick an experienced program during the regular season nine times out of ten.

I’ll admit, you may have me at Missouri.

Out of every loss against a power five team, Missouri’s was the most winnable. The Tigers have close contests against George Mason and Southern Mississippi on the record book. Missouri also beat Xavier handily but joined the club and lost big to Iowa State earlier this season.

The Tigers just aren’t very impressive. With all the coaching changes in the NCAA and NFL right now, head coach Cuonzo Martin should try to grab himself an offensive coordinator. At this rate, it doesn’t matter if it’s the wrong sport, any kind of offense would make this Tiger team better.

Missouri is currently averaging 69.1 points per game, which ranks 293rd out of 353. The team’s saving grace has at least been its ability to slow opponents on the other end, only allowing 63.2 points per game, ranking 32nd in the nation.

I will say though, we both know what can happen to teams with high defense ratings and poor offensive efficiency in the NCAA Tournament.

While Illinois has had its struggles, it at least has put up better-scoring efforts than Missouri. The explosiveness of the Illini’s guards should have carried the weight for Illinois in the game. And while center Jeremiah Tilmon is a massive presence inside, Illinois could have looked to attack the paint a little harder.

At the end of the day, the game was set at an even spread and rightfully so. Illinois was coming into the game with a five-game win streak over the Tigers but failed to surprise anyone this season with a convincing win.

Speaking of a convincing win, the closest Illinois came was against Notre Dame in a matchup on the road where the Fighting Irish were 10.5-point favorites. Illinois brought it all the way down the wire as Frazier let up a three-ball that spun in-and-out of the basket. The win would have been the best of the year for Illinois, but being a relatively big underdog, it was a game Illinois was supposed to lose, so don’t get hung up on that one.

All of this goes to say one thing; record-wise, Illinois isn’t too far off from what makes the most sense.

The people hiding behind the brick wall of the internet can say I am making excuses all they want but playing one of the hardest nonconference schedules in the country can produce this result.

Heading into a Big Ten slate that tips-off against Indiana won’t make things any easier.

Playing tough competition early-on can certainly develop young players. However, with the strength of the Big Ten, the development may not translate into wins as soon as people like.

The season from the beginning was about taking young, exciting players and growing them into a legitimate Division 1 unit.

Illinois has more athleticism on its current basketball team than it has in years. Whether that will turn into production in the win column down the road is up to Underwood and Co.

For now, sit back, relax and just watch some basketball … or don’t.

Correction: Originally, the story falsely stated that Missouri had beaten Kansas State earlier this season, which has been removed. In addition, the story was updated to clarify that Iowa State’s six-year tournament run ended last season.