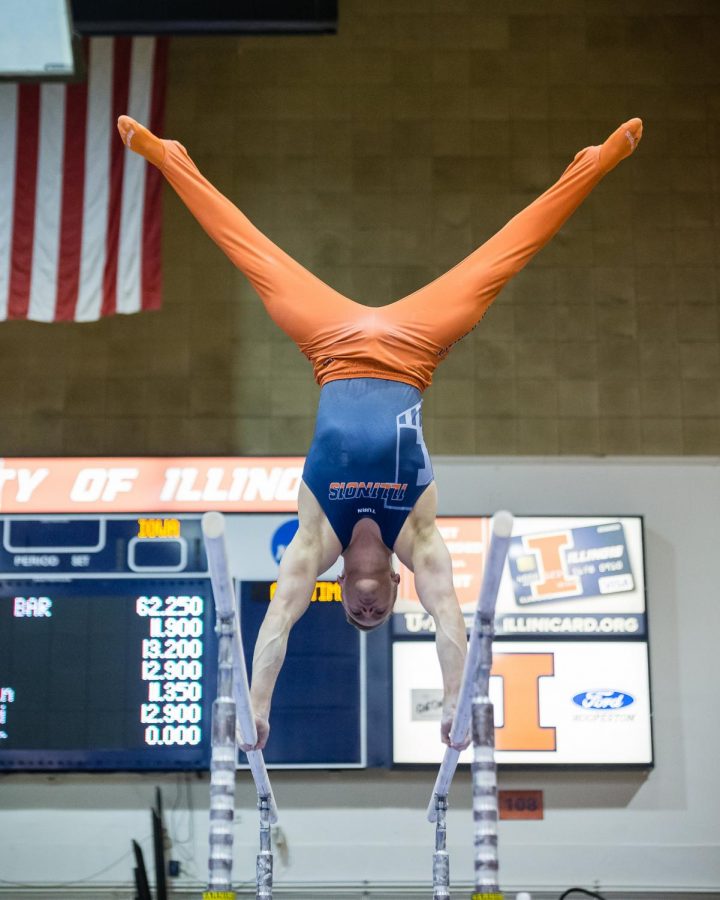 Illinois’ Johnny Jacobson performs on the parallel bars during the meet against Iowa at Huff Hall on Saturday. The Illini won 410.450-398.800.

The Illinois men’s gymnastics team had its first Big Ten meet of the season this weekend when it battled No. 9 Iowa.

The Illini came out victorious with a final score of 410.45-398.8, including a clean sweep of each event. The team was led by senior Johnny Jacobson’s 81.95 points.

“Johnny was hands down the star tonight,” said head coach Justin Spring. “Pushing the 82 (points) is seriously impressive.  It’s really exciting for him and a jolt for the team.”

The other stars of the night were Alex Diab and Clay Mason Stephens. Diab is coming off of an outstanding junior season, during which he won a national championship in still rings. When battling the Hawkeyes, Diab continued his success on the rings by outscoring every opponent by nearly a full point. Diab also led the Illini with 14.5 points on the vault and contributed another 13.9 points on the floor.

“It just comes down to my consistency in practice,” Diab said. “I’m just doing what I do in the gym and then I make it happen on Saturdays.”

“Every single week me and the team work our butts off,” Stephens said. “So to come in here and set career highs is rewarding and also expected.”

Another reason for the Illini’s success was the atmosphere at Huff Hall.  The stands were packed, in large part because of Illinois’ 2018 season. The 2018 Big Ten Champions unveiled the team’s championship banner ahead of events. The over 1,000 fans that packed into Huff Hall made their presence felt as the Illini came out with a win over a top-10 team.

The only cause for concern could be Hamish Carter’s performance on the horizontal bar. Carter fell twice in his routine and had the lowest score of the evening, at 10.65.  Though Carter fell twice, Spring is not worried in the slightest.

“He just got here three weeks ago, and his recruiting process started six weeks ago,” Spring said.  “He’s been through a whirlwind and is not in routine shape. He’s been injured, and his consistency probably shouldn’t have warranted him being in lineup today.”

Aside from a few small question marks, the Illini feel in good shape for the coming season. Their next step is Lincoln, Nebraska, where they will face two top-five-ranked teams: Nebraska and Oklahoma.